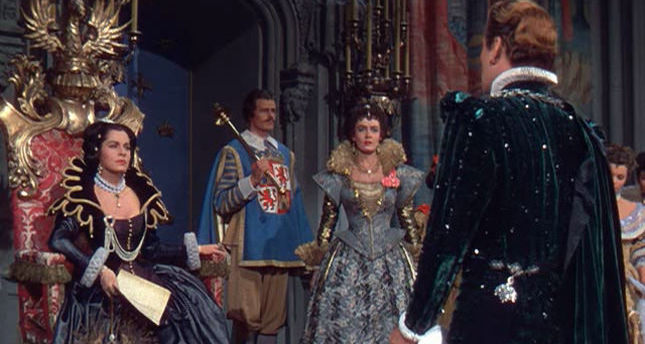 Don Juan and Faust emerged before the French Revolution and bear certain similarities because they are both unable to control their desires. The two plays reveal the clash of ideas between Faust and Don Juan, one of whose mission is to awaken desire and bring emotional and physical pleasure, while the other describes such needs as weakness and avoids them.

Don Juan, a wealthy libertine, goes to Rome with his servant Loperello and falls in love with Donna Anna, the daughter of Spanish ambassador Don Gonzalo. Although Donna Anna loves Don Juan, she gets engaged with Duke Octavio, a member of an aristocrat family. Anna rejects Don Juan, as she believes love is temporary but fidelity lasts forever. Then everything becomes tumultuous.

In her review, sociologist Aslıhan Göktuğ said Turkish-German actor Haydar Zorlu's solo performance in "Faust" attracted a large audience, and this is why his next play "The Legend of Don Juan" increased expectations for him. "I believe he exerted the same effort for this play, as he had previously devoted to "Faust" and paid particular attention to both," she continued. The review went on to say Zorlu's interpretation is an influential version of "Don Juan," which has been staged in different languages around the world for many years. "I am proud to watch the Turkish version of the play, a powerful step in the Turkish art scene. While you watch his interpretation, you will see that the "Legend of Don Juan" breaks the routine," she added. The play introduces a new perspective to viewers by ignoring other play scripts based on mere repetition. Göktuğ underscores the innovative approach of Zorlu, who edited the original play without exceeding its borders. "If you find the reflections of Don Juan's mysterious features in other characters, then you feel the need to review the existential philosophy that is generally described in a superficial way. I think Don Juan is a rather influential character, at least for me, who is able to persuade people that he follows the right path," she said.

Leoporello: He cannot show his complaints to his master, which makes him behave in such an interesting way that viewers see the breaking point of the drama and begin to smile. Leoporello has another desire, though, and reveals it with the following words, "Master, if it was possible, I would be like you!"

Donna Anna: Burcu Ertürk's performance beautifully reflects the deep love of Donna Anna to viewers. A nice atmosphere surrounds the stage while she is dancing with Don Juan. A must-see visual feast of rich body language and love...

Duke Octavio: While Don Juan shows the most passionate form of love, Duke Octavio is such a reliable man that any woman can give herself to him without blinking an eye. Duke Octavio has loved Donna Anna since his childhood and is excitedly waiting for the wedding day. He also has everything to win the heart of Anna's father.

Zorlu stages Goethe's masterpiece work "Faust" as a solo performance in either Turkish or German and sometimes in both languages. The tragic play drew incredible interest and attention when it was first staged at KunstRaum. Doctor Faust believes that there is nothing left that he can learn and sells his soul to Mephisto, the devil, to recover from agony bound by life on earth. Mephisto promises to treat his illness. A witch gives Faust an elixir that makes him young again. Transforming into a good-looking man, Faust falls in love with a beautiful girl named Gretchen. She is unable to escape from Faust's deep passion for her.

Famous historian İlber Ortaylı's comments about the play on KunstRaum's website support the success of its Turkish version. "I watched Haydar Zorlu at Muammer Karaca Theater on Jun. 26. He adopted Goethe's famous work "Faust" into an 80-minute play and adapted it into Turkish by himself. He rendered the introductory tirade in German to catch the musical effect in Goethe's poem. There is no need to understand the whole text, but you must pay attention to the master musicality in Goethe's original language," he said.

Zorlu was raised in Germany and speaks German very well. Ortaylı stated Zorlu's Turkish performance also showed his other specialization. "It was pleasing to see a full theater hall and great interest in Goethe and classical theater. Born in Turkey's eastern region, Zorlu studied linguistics and theater in Germany. "His successful theatrical performance is highly commendable," he concluded.