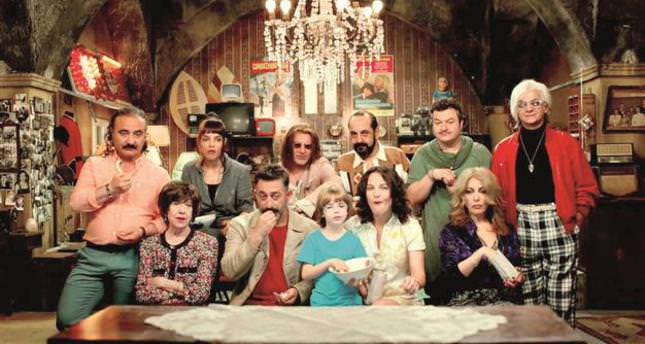 by Daily Sabah Jan 23, 2015 12:00 am
For the first time, Vancouver is hosting a Turkish film festival, with the event kicking off today. The First Vancouver Turkish Film Festival (VTFF) will open with a classical music concert by the event's guest of honor, Turkish composer and musician Rahman Altın, who will perform the scores of Yılmaz Erdoğan's acclaimed film "Kelebeğin Rüyası" (The Butterfly's Dream). The gala night will feature Cem Yılmaz's latest film "Pek Yakında" (Very Soon). Hakan Burcuoğlu, the festival president, spoke to the Anadolu Agency, saying that the event aims to introduce Turkish culture, arts and identity through cinema to both Canadian and Turkish citizens in Vancouver, which is Canada's third biggest city and one of the most important film production centers in North America. According to the festival program, the mainstream Turkish cinema section will feature Cem Yılmaz's "Pek Yakında," (Very Soon) Çağan Irmak's "Unutursam Fısılda," (Whisper me if I forget), Yılmaz Erdoğan's "Kelebeğin Rüyası" (The Butterfly's Dream) and Ozan Açıktan's "Silsile" (Sequence). "Şarkı Söyleyen Kadınlar" (Singing Women) by Reha Erdem and Onur Ünlü's drama "Sen Aydınlatırsın Geceyi" (Thou Gild'st the Even) will be screened in the section of artistic Turkish films. The festival's "Cannes and Venice Showcase" section includes Burak Cem's "Türk Pasaportu" (Turkish Passport), Rezzan Yeşilbaş's "Sessiz" (Silent), which won the Palme d'Or at Cannes Film Festival, Ali Aydın's "Küf" (Mold), which holds the trophy for the Lion of the Future at the Venice Film Festival and Kaan Müjdeci's "Sivas," the winner of the Special Jury Prize in the Venice Film Festival. The award-winning short films section will screen Onur Yağız's "Patika" (The Path), Buğra Dedeoğlu's "Şeref Dayı ve Gölgesi" (Uncle Şeref and His Shadow), while Can Candan's "Benim Çocuğum" (My Child) and Andrea Luka Zimmerman's "Taşkafa: Stories of the Street" will be in the festival's documentary films. The event will end with a closing screening of the "Butterfly's Dream" on Sunday, Jan. 25.