Festival to be held for lovers of Japanese fılms 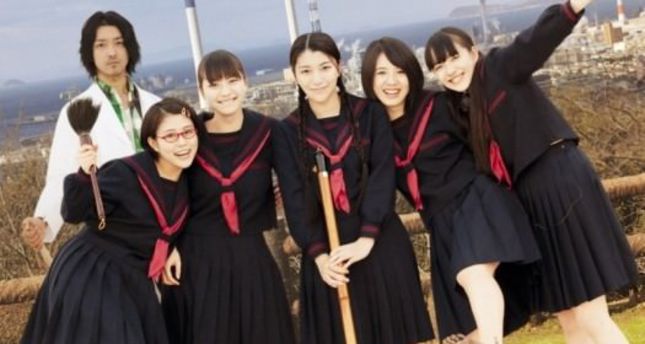 The 11th Japanese Film Festival in Istanbul will be held between 4 and 14 Feb., featuring six selected Japanese films

Organized jointly by the consulate-general of Japan in Istanbul, the Japan Foundation and Akbank Sanat, the 11th Japanese Film Days will take place in February. During the festival, six Japanese films including director Mitsutoshi Tanaka's masterpiece "Ask this of Rikyu" and "Blossoms Blooms" will be screened.

Known as "paper town," the Japanese city Shikoku Chuo is the center of paper production in Japan. However, the city's prosperity suffers due to an economic recession.

"Kotonoha No Niwa"
(The Garden of Words)

Takao, who dreams of becoming a shoemaker, skips school and sketches shoes in a Japanese-style garden. After meeting a mysterious woman, Yukino, who is older than him, Takao and the woman begin to see each other spontaneously, but only on rainy days. As their relationship gets deeper, the rainy season is about to end.

"Sen To Chihiro No Kamikakushi"
(Spirited Away)

Ten-year-old Chihiro loses her way while she and her family are moving, and ends up in a mysterious world called "Aburaya," ruled by gods. All alone in a strange place, Chihiro, who cannot return to her parents as they have been transformed into pigs, meets with a mysterious young man named Haku. Her new friend says that the little girl has to work at the bath in order to save her parents. Chihiro immediately makes a deal with the manager of the bath, Yubaba. Will she be able to save her parents and get back to the real world?

"Miyori No Mori"
(Forest of Miyori)

Being left in her grandmother's care by her parents, 11-year-old Miyori begins to take long walks in the forest near the house. One day, during one of her walks, she encounters strange happenings such as the blossoming of a cherry tree that was struck by lighting the previous year and a tiger that is not supposed to be in the forest. After a short time, forest spirits appear and ask Miyori's help to save the forest which will soon be submerged due to the dam.

The tea ceremony master Sen no Rikyu is surrounded by 3,000 soldiers. While he is about to commit sepukku upon the order of the emperor's deputy, Hideyoshi Toyotomi, he begins to recall the ups and downs he experienced when he was ten years old after his wife asks him a single question. Adapted by Kenichi Yamamoto's 140th Naoki Sanjugo Award winning novel, the film won nine Outstanding Performance awards at the 37thh Japanese Academy Awards and Best Artistic Contribution awards at the 37th Montreal International Film Festival.

Shunsuke, who works for a huge company, maintains an ordinary life with his wife, two children and his father. As he is a workaholic, his wife carries out all household duties. The family relationships are on the rocks and Shunsuke's father is diagnosed with dementia. For a while, Shunsuke runs away from the truth but after accepting what is happening to his family, he skips an important business meeting and decides to take his family on a road trip. Shocked by his sudden decision, the family sets off to his home town of Shunsuke to spend the spring. The film, which was adapted from Masashi Sada's novel of the same name, was screened at the World Cinema section of the Montreal Film Festival.