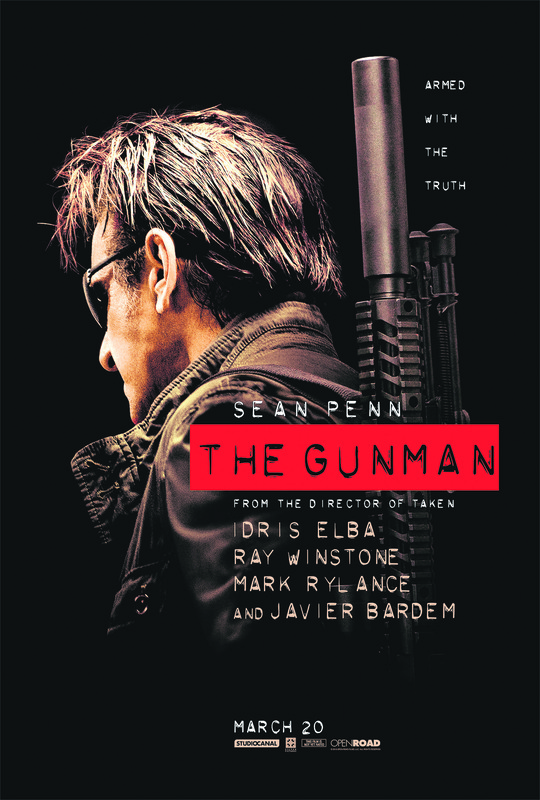 A sniper on a mercenary assassination team, which works for an unknown client, murders one of the government ministers of Congo. After the crime, he is forced to stay in the shadows, leaving his life, girlfriend and everyone he loves for many years. The assassination also creates chaos in Congo. The sniper returns to Congo and finds himself as the target of a killing squad who wants to kill him, as he knows too much about the death of the minister. Starring Sean Penn, Javier Bardem, Mark Rylance, Blanca Star Olivera, Jorge Leon Martinez, Deborah Rosan, Angela Fuente and Elia Diaz, "The Gunman," which features Penn as the experienced sniper, is directed by Pierre Morel, known for action movies such as "From Paris with Love" and "Taken."

Directed by Academy Award winner Susanne Bier, the Danish production stars Nikolaj Coster Waldau of the "Games of Thrones" series, Ulrich Thomsen, Maria Bonnevie and May Andersen. The drama focuses on the experienced police officer Andreas, his beautiful wife Anna and their newborn baby. While on duty, Andreas responds to a domestic violence call with his partner and best friend, Simon, at the home of ex-convict Tristian and his girlfriend Sanne, who have a baby named Sofus. Andreas does everything he can to protect the baby, which has been brought up in an unhealthy environment; however, he cannot do much within the boundaries of the laws. This incident affects Andrea, who has to make a critical decision, as well as his life and his perspective on the concept of justice.

Staring Willem Dafoe, Riccardo Scamarcio, Ninetto Davoli and Valerio Mastandrea, the biographic film is directed by Abel Ferrara. The film centers on the last day of Pier Paolo Pasolini before being murdered. The drama sheds light on the murder of Pasolini who was a poet, director, journalist and intellectual.

An extremely accomplished con man, Nicky, takes amateur con artist Jess as his apprentice; however, he is attracted by her soon afterward. While Nicky is teaching the details of being a con artist, Jess gets close to Nicky and, as he is afraid of losing focus on his job, he ends the romantic relationship. Three years later, the ex-lovers meet in Buenos Aires. However, Jess turns Nicky's biggest and most dangerous con upside down and makes a mess of Nicky. Directed by Glenn Ficarra and John Requa, the comedy stars Academy Award nominee Will Smith and Margot Robbie.

Adapted from Veronica Roth's best seller novel, "Insurgent" is the second film of the "Divergent" series. Directed by Robert Schwentke, the film stars Shailene Woodley, Theo James and Jai Courtney in the leading roles. Insurgent continues to focus on Four and Tris' fight against the system.
Last Update: Mar 21, 2015 1:46 am
RELATED TOPICS