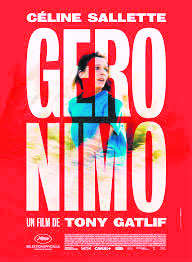 In the sultry August heat of Southern France, Geronimo, a young social educator, tries to ease tensions between two groups of youngsters living in the St. Pierre neighborhood. Everything goes south, however, when a teenage girl of Turkish origin runs off to marry her gypsy lover instead of the boy who was chosen by her parents. In turn, Geronimo has to reduce the tension in the neighborhood. Starring Celine Sallette, Rachid Yous, David Murgia and Nailia Harzoune, the film was directed by Tony Gatlif, who was inspired by her own life.

This drama focuses on the stories of nine people whose lives intersect at a sanatorium and an illegal operation. "Terkedilmiş," which tells story of a Syrian refugee family and their connection with the mafia through the nine people at the sanatorium, is a film pressing buttons on current social issues. Directed by Korhan Uğur, the film stars Levent Ülgen, Hakan Vanlı, Neriman Uğur, Kyamran Agabalaev, Konul Nagiyeva, Hakkı Ergök, Sema Şimşek, Burak Sarımola and Mahmut Gökgöz.

Starring Cansel Elçin, Haluk Piyes, Sera Tokdemir, Naz Elmas, Burcu Kıratlı, İbrahim Kendirci, Çiğdem Batur, Şebnem Dilligil, Erdinç Gülener and Ahmet Mekin, "Bizim Hikaye" was directed by Yasin Uslu. The film tells the story of a man struggling with the courts to restore the honor of his father who was imprisoned during the 1980 military coup for a book he wrote. The movie was shot in Sinop, Trabzon and Rize as well as the historical peninsula of Istanbul. The soundtrack of the film, which offers a visual fest to the audience with beautiful frames of the Black Sea region's scenery, was composed by Mustafa Ceceli.

An ageing rock star who owned wildlife in the 1970s is now very old. The day his manager delivers a letter written by John Lennon to him 40 years ago, Danny Collins decides to make one last song to make up for everything he regrets. While trying hard to bond with his family again, he becomes romantically involved with an employee at the hotel in which he is staying. The film was written and directed by Dan Fogelman, who is known for blending comedy, romance and drama in his films. Starring Al Pacino, Annette Bening, Bobby Cannavale and Jennifer Garner and inspired by a true story, "Danny Collins" centers on a rock star who rediscovers himself.

At the Devil's Door

Directed by Tim Johnson, this animated film tells the story of Oh, an alien on the run from his own kind, and Tip, who is on a quest of her own. Voiced by Jim Parsons, Rihanna, Steve Martin and Jennifer Lopez, the film centers on the quest to discover the meaning of home.
Last Update: Mar 28, 2015 2:14 am
RELATED TOPICS