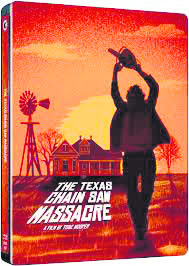 The famous slasher film that marked its name in world cinema history has been restored to mark its 40th year. The 1974 version of The Texas Chainsaw Massacre was directed by Tobe Hooper and starred Marilyn Burns, Allen Danziger, Paula A. Partain, William Vail, Teri Mcminn, Edwin Neal, Jim Siedow, Gunnar Hansen and John Dugan. The film was a huge success with its bloody scenes and attracted a large audience. The horror film is based on real stories and encouraged the production of many other films in this category. The Texas Chainsaw Massacre is still considered among the best horror films of all time. A group of five friends pay a visit to the house of one of their grandfathers in the country. They are haunted and terrorized by a chainsaw-wielding killer and his psychopathic family.

The latest installment of the phenomenal American action film "Fast and Furious 7" will thrill movie buffs once again. Starring Vin Diesel, Paul Walker and Dwayne Johnson, the film is written by Chris Morgan and directed by James Wan. "Fast and Furious 7" will introduce new faces in its cast such as Jason Statham, Djimon Hounsou, Tony Jaa, Ronda Rousey, Nathalie Emmanuel and Kurt Russell. The crew of "Fast and Furious 7" is unaware of a secret British assassin Deckard Shaw (Jason Statham). Shaw is determined to take revenge for his younger brother Owen's death. He explodes Toretto's house. Dom asks the help of a senior state agent. The crew will face their biggest challenge while searching for a tracker in Abu Dhabi, Tokyo and Azerbaijan. The film cast features Michelle Rodriguez, Jordana Brewster, Tyrese Gibson, Chris Bridges, Elsa Pataky and Lucas Black. The action film series is centered on illegal street racing and heists.

Written and directed by Özen Aksular, the thriller drama stars Levent Sülün, Hakan Salınmış, Güliz Şirinyan, Erdoğan Sıcak and Russian actress Karina Malsagova. In 1984, Valeria who works for one of the Extra Sensory Perception (ESP) laboratories in the Soviet Union travels to Turkey after the invitation of her ex-lover Nazım. She is asked to research a woman known as "Nazife the Possessed." One day, while she is working in the Nalbant village in the province of Kastamonu, she vanishes without a trace. Villagers find Nazife paralyzed and Nazım out of his mind. Meanwhile, Ceyda comes to the village to deliver her second child. She arrives in the house that her grandmother left 30 years ago. The secrets of the past suddenly begin to reveal themselves.

Adam Sandler, Dustin Hoffman, Steve Buscemi and Method Man present a magic realism comedy-drama in "The Cobbler." The film is directed and written by Thomas McCarthy. Bored from his routine life, Max Simkin (Adam Sandler) repairs shoes in a New York shop. He accidentally comes upon a magical heirloom that allows him to step into the lives of his customers. Max now has a big chance to change his ordinary life.
Last Update: Apr 04, 2015 11:27 am
RELATED TOPICS