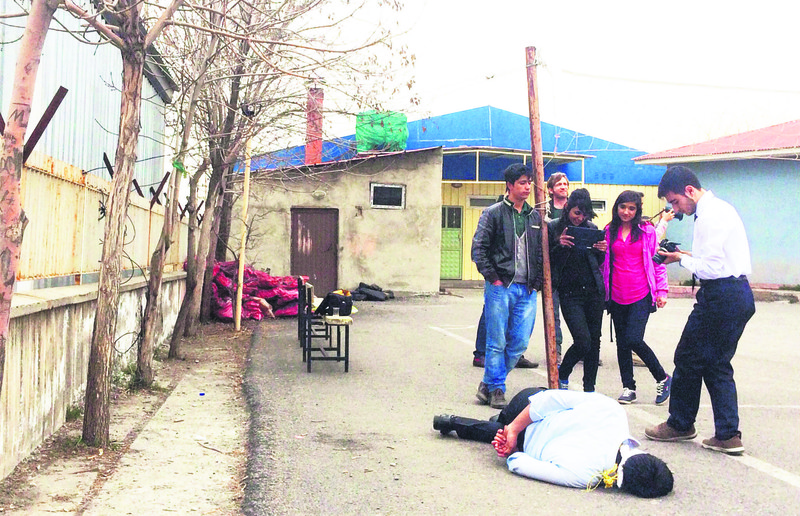 by daily sabah Apr 26, 2015 12:00 am
The "Children's Right and Cinema Protect" has been initiated within the scope of the Civil Society Dialogue Program in collaboration with Başak Culture and Art Foundation, Van Bar Association and the Netherlands-based NGO DW-RS Producties. The project which is funded by both the European Union and Republic of Turkey continues in Soma district of Manisa following the establishment of its first leg in Van. The event which will continue until tomorrow aims to give moral support to children and young people and ease the effects of the traumatic Soma mine tragedy which occurred last year. With the contributions of the Soma Psycho-Social Support Center, the ongoing program includes cinema and human rights workshops as well as an NGO meeting.

During the first leg of the project, 16 high school students from Van attended the "Human Rights and Cinema Workshop" under the supervision of actor and director Derya Durmaz and American director Theron Patterson, with the participation of the President of Van Bar Association Murat Timur and solicitor Nazlı Polat. The students received exclusive training on filmmaking and scriptwriting for films. The training enabled children to feed their imagination and raise awareness about rights and violation of rights, while learning more about filmmaking as a director, cameraman, actor or editor. In order to create a dialogue between the NGOs of Turkey and the European Union, a meeting was organized in Van with certain local administrations and public institutions. Besides, the project provided a two-day training to a group of solicitors about the legal needs of children. The trainings took place with the participation of child development expert and educator Ezgi Koman of the Gündem Children's Association, Murat Timur, the president of provincial children's right commission Mehmet Zeki Kutluk and nine other solicitors. Human rights and cinema workshops in 14 provinces of Turkey as well as Amsterdam will be held within the program which is planned to be completed in 14 months.
Last Update: Apr 26, 2015 11:26 pm
RELATED TOPICS