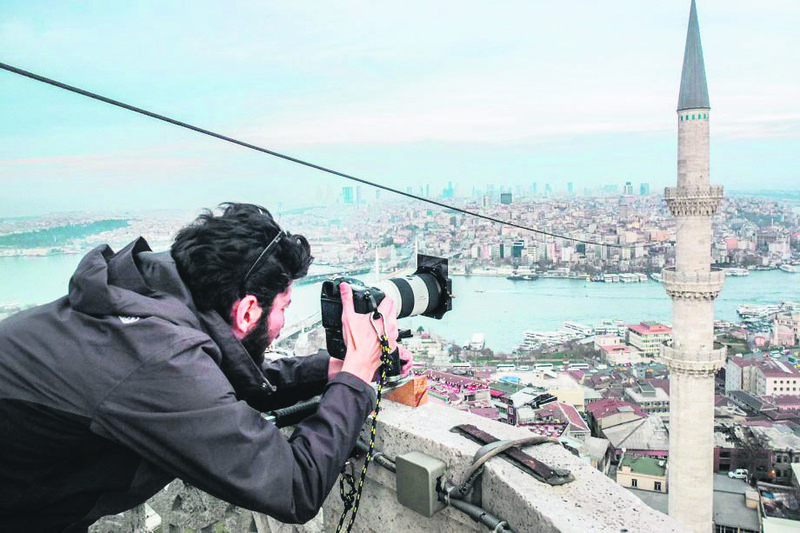 by Hasan Ay May 12, 2015 12:00 am
Director Cüneyt Karaahmetoğlu has created a short film of Istanbul's famous skyline by photographing Istanbul from the 20 mosques built by Mimar Sinan, the chief architect of the Ottoman Empire. His film "5 Asır Sonra Sinan'ın Minarelerinden 4 Mevsim" (Four Seasons from the Minarets of Sinan after Five Centuries) will be screened during Turkish Airlines (THY) flights. Karaahmetoğlu spent 12 months with his equipment, which weighed 37 kilograms, climbing up the minarets for the film.

The director spent hours on the minarets, taking 170,000 photographs based on a time-lapse technique to prepare his 16-minute short film. Underlining the admiration he has had for the works of Mimar Sinan since childhood, Karaahmetoğlu said, "My admiration toward him increased after this work. I felt so peaceful while I was on the minarets. It is wonderful to know that you are looking at the city from a point that nobody looks from." He said the project took two-and-a-half years to complete and he once spent seven hours in one go on a minaret. "When I took the winter shot when the fog came down, I spent seven hours on the minaret. I walked down and came up just to warm up," he said.

Karaahmetoğlu said that the hardest shoots were the winter shots due to the weather conditions. "I woke up before the morning prayer almost every day and looked out of my window to see the weather and the clouds," he continued. Climbing hundreds of stairs to reach the minarets, he stated that "Istanbul is still glorious despite all the shanty settlements." Can Erdoğan Sus took on the film's soundtrack. Alongside the Bratislava Studio Orchestra, Erkan Oğur played the lute, saz and fretless guitar, while Derya Türkan played the kemençe and Ertan Tekin played the pipe. Sponsored by THY, the film is expected to be screened at the "Mimar Sinan and Masterpieces of the Creative Genius" exhibition held at Tophane-i Amire Culture and Art Center.
Last Update: May 12, 2015 10:31 pm
RELATED TOPICS