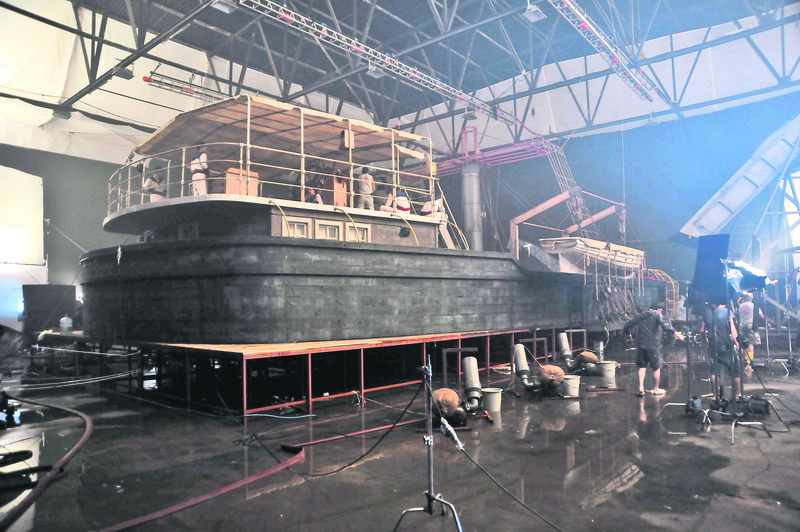 Antalya is currently hosting a film set on the Ertuğrul frigate that sank in 1890 as a token of goodwill between Turkey and Japan. Relations strenghtened when Turkish Prime Minister Turgut Özal ordered the rescue of Japanese people during the Iran-Iraq War

"Ertuğrul", a film depicting the story of an Ottoman frigate that sank in 1890 while returning from a goodwill trip to Japan, as well as 215 Japanese citizens that were rescued from the Iran-Iraq War upon the order of the then-Prime Minister Turgut Özal in 1985, is being shot in the southern province of Antalya.

Starring Shioli Kutsuna, Mehmet Özgür, Kenan Ece, Melis Babadağ and Murat Serezli, the film was directed by Japanese director Mitsutoshi Tanaka, written by Eriko Komatsu and includes more than 10,000 support staff. The movie's cast is currently based in the Tekfen Film Plato located in Antalya's Serik district. Tanaka said he arrived in Turkey three months ago to begin working on the film, and the cast spent three months in Japan before they came to Antalya. He added that the Ertuğrul frigate disaster highlights the friendship between Japan and Turkey and is a message of peace.

"We have received wonderful support from the Turkish government," Tanaka said, adding that officials have allowed the cast to shoot the movie on cultural heritage sites that are normally prohibited to filmmakers. The production team is exerting every effort to introduce a high-quality film, and its script demonstrates the cultural relations between Japan and Turkey. According to the director, "Ertuğrul" also contributes to the good relations between President Recep Tayyip Erdoğan and Japanese Prime Minister Shinzo Abe.

Professor İskender Pala, the movie's historical advisor who was asked to review the script prior to filming, said "Ertuğrul" addresses one of the most significant incidents in Ottoman history. "This is because participating in the project is as important as being a part of an epic story," he stressed. Pala said large production potential exists for many other films regarding Ottoman history, and expressed his happiness to watch a Turkish-Japanese production. "The script was well-written by the Japanese scriptwriters, yet it had to be adapted to the Turkish audience's point of view," Pala said. "We worked together and shaped the script in a way that will contribute to strengthened bonds between Turkey and Japan. Moreover, the film's set was exclusively designed for the movie. The store of the E

rtuğrul frigate is a sorrowful page in Ottoman history. If we create a story worth-watching, young viewers can learn lessons from it and maybe want to make similar works. That will be the main gain," he said, emphasizing Turkey is fortunate to benefit from Tanaka and the Japanese team's experiences.

Pala said a sequel to the film might show how the frigate was sent to Japan on the order of Ottoman Sultan Abdülhamid II, while also focusing on the empire's efforts during that period. He said the film should be seen as a gift honoring Abdülhamid II. "It is expected to be a very successful film, one that's supported by the government and the Culture and Tourism Ministry. The cast is also very skilled; all members are highly commendable," he said.

Pala said that Turkish TV series and films have made significant progress over the past 10 years, rising to a level that could not have been previously imagined. Pala also said the film technologies in Turkey to make a historical film are as developed as those in Hollywood, but certain shortcomings are still present. "We can shoot successful movie scenes and make war films, but it is only possible to benefit from them if our soul, values and civilization is reflected in them. [Historical films are often watched] because history attracts people from around the world. Not only films and TV series, but historical novels and other kinds of media are also followed," he said.

Emphasizing what such films can accomplish, Pala said people ask themselves the question of you they are because "humans struggle to survive among other nations through their own identity. This is the clash of civilizations." Pala added that people chase after the questions "what kind of cultural richness do we have?" "how can we survive with its help?" or "how can we can contribute to world science, art and culture?" To answer these questions, they undoubtedly need to read history, he said. "Humans find their identity through history and go into the future with their cultural richness. Turkey is very lucky in this regard. The country's cultural background is richer than many other nations," Pala claimed.

The shooting of "Ertuğrul" began last December in Japan. The production is supported by the Cinema Directorate of the Culture and Tourism Ministry, Ertuğrul Film Partners from Japan and executive producer Böcek Yapım. The movie is now being shot in Istanbul, Antalya and Cappadocia, and shooting is expected to be completed at the end of May. "Ertuğrul" will open in Turkey in November and be screened in Japan through the end of December.
Last Update: May 20, 2015 11:25 pm
RELATED TOPICS