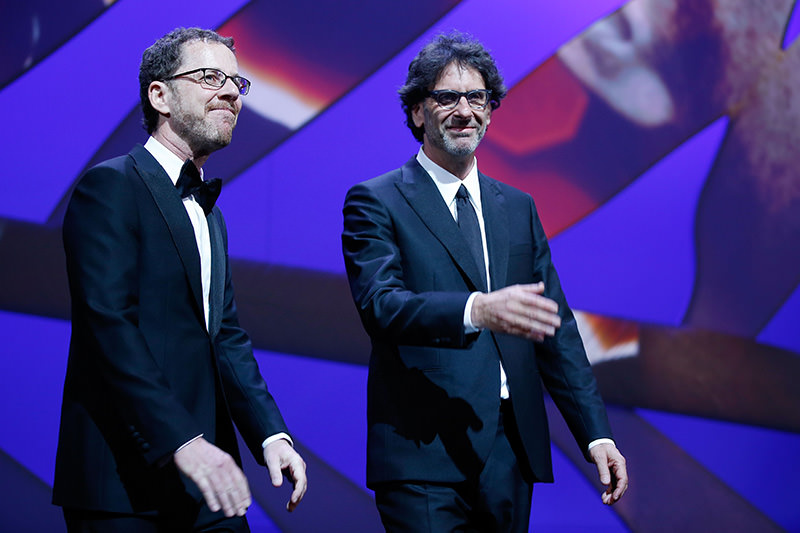 US directors and Presidents of the Feature Film jury Ethan Coen (L) and Joel Coen arrive on stage during the opening ceremony of the 68th Cannes Film Festival in Cannes, France, on May 13, 2015 (AFP Photo)
by Daily Sabah with Agencies May 24, 2015 12:00 am
The Cannes Film Festival ends Sunday with an awards ceremony that will bestow its coveted Palme d'Or on one of 19 films in competition.

On Saturday, "Rams," a drama set among farmers and their sheep in a remote Icelandic valley, won the Cannes Film Festival's Un Certain Regard competition. Jury president Isabella Rossellini said Grimur Hakonarson's film was honored for "treating in a masterful, tragicomic way the undeniable bond that links all humans to animals."

Its second-place Jury Prize went to Croatian director Dalibor Matanic for "Zvizdan" ("The High Sun"), which explores love and ethnic hatred in the Balkans.

The Un Certain Regard competition honors new directors and more offbeat films than the Palme d'Or.

A nine-member jury headed by US filmmaking brothers Joel and Ethan Coen are due to select the winners from the 19 films comprising this year's main competition. Others on the Cannes jury this year include Guillermo del Toro, Jake Gyllenhaal, Sienna Miller, Sophie Marceau, Xavier Dolan, Rokia Traore and Rossy de Palma. The awards will be given at a gala event in the French resort town.
Last Update: May 24, 2015 4:09 pm
RELATED TOPICS