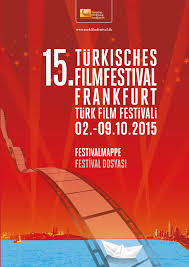 by Daily Sabah Sep 05, 2015 12:00 am
The 15th Frankfurt Turkish Film Festival will be held between Oct. 2 and Oct. 9. According to the written statement released by the festival coordinators, about 30 films that will be featured as a part of the festival will be screened at CineStar Metropolis, Orfeo's Erben and Film Forum Höchst as well as Preungesheim Prison and the Anne Frank School.

Panel sessions, exhibitions, concerts and inter-university short and feature-length film competitions will be organized as part of the festival program. Within the scope of the RheinMain Festival Project the featured festival films will be screened in the cities of Offenbach, Friedberg, Langen and Bad Kreznach.

The festival, which will kick off with the screening of "Kocan Kadar Konuş" (Husband Factor) starring Ezgi Mola and Murat Yıldırım, will host many actors, directors, producers, musicians and writers including prominent figures such as Filiz Akın, Zülfü Livaneli, Nilüfer Açıkalın, Talat Bulut, Mesut Ali and Tuna Kiremitçi. Greece and Azerbaijan will be the guest countries of this year's festival.

As it has become a tradition, the Golden Apple Awards which are presented in seven different categories will be granted to the chosen films and film crews for the third time in the history of the festival. As it was in previous years, this year the jury will be composed of German movie-makers. The pre-election jury which is composed of Turkish movie-makers will feature Yetkin Dikinciler, Nilüfer Açıkalın, Ümit Ünal, Ömür Gedik, Prof. Dr. Bülent Vardar, Bedir Acar, Başak Sayan and Caner Ural.

Apart from Turkish and Turkish-German co-productions, the festival will also feature various examples from European cinema as a part of "European Film Forum" and the films will be screened with Turkish and German subtitles.

The president of Frankfurt Turkish Film Festival Hüseyin Sıtkı said the want to build a bridge of peace, culture and brotherhood by hosting two countries from Caucasus and the Balkans and guest countries of the festival.

He underscored that the festival grows every year and becomes one of the most important and effective film festivals in Europe. "As it happened in previous years, we will bring directors, script writers, actors and producers together with movie-buffs following the screenings. We are aware that we carry a huge responsibility on our shoulders. We believe that we will not let people down in our 15th years of organizing this festival," said Sıtkı.

Organized by Intercultural Transfer Foundation, the Frankfurt Turkish Films Festival is held with the generous contributions of the President of the state of Hessen Volker Bouffier, Science Minister Boris Rhein, the Ambassador of Turkey in Frankfurt Ufuk Ekici and Frankfurt Mayor Peter Feldmann.

Sıtkı, who has been the president of the festival for the last 15 years, was granted many awards including the Order of Merit of the Federal Republic of Germany due to her outstanding work for social responsibility projects.
RELATED TOPICS