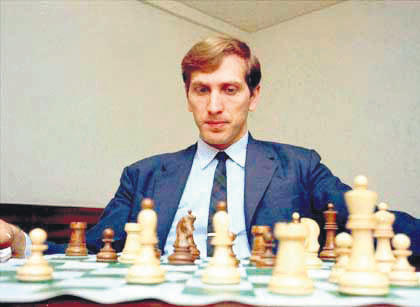 by Piya Sinha-Roy Sep 22, 2015 12:00 am
Bringing American chess champion Bobby Fischer's story to the big screen posed a challenge for the filmmakers of "Pawn Sacrifice." How would they make a film about chess visually compelling?

Their answer: the movie is not really about chess.

"(It's) the dominance of one man's will over another," director Edward Zwick told Reuters.

"Mental toughness defines a great athlete even more than one's skill and ability to do something like this day after day, hour after hour, with the same degree of commitment, and that, I think, can be dramatized."

"Pawn Sacrifice," out in theaters on Friday, traces Fischer's origins before he became a celebrity and played his historic match against Russian chess champion Boris Spassky in 1972. Soviet-born players had dominated chess for decades and both superpowers touted the confrontation as a Cold War showdown.

Fischer, who died in 2008 at 64, took the chess world by storm as a teenager. Tobey Maguire portrays the young Fischer as isolated yet brash, arrogant and tempestuous.

"He's very particular and he wants to control the circumstances," said Maguire, who researched Fischer extensively. "I think by and large, there's fear wrapped up in that, but he understood his worth and he was leveraging it. He just wasn't that elegant about it."

The film sketches Fischer's upbringing as a solitary child raised by his single mother in Brooklyn. He turned to chess for comfort, grew obsessed with the game and became a grandmaster at 15.

With the international spotlight on the match in Iceland, Fischer carried his country's hopes for Cold War bragging rights reluctantly, as did Spassky, played by Liev Schreiber.

"There's an identification that's taking place between these two men, that they were aware of each other's predicament and some odd fellow feeling developed in the midst of competition, a very interesting mutual respect," Zwick said.

Fischer's celebrity also exacerbated his paranoia. The movie barely touches on his later life, when he exiled himself from the United States and made vitriolic public anti-Semitic and anti-American tirades. He spent his final years in Iceland.

"Once I got past being horrified about some of the stuff I heard, then digging into it and trying to understand where it came from was fascinating," Maguire said.

"He's a tragedy," added Zwick. "It's a particularly American story to me, that ambition and dedication to a single thing would end up also containing within it the same seeds of one's own demise."
RELATED TOPICS