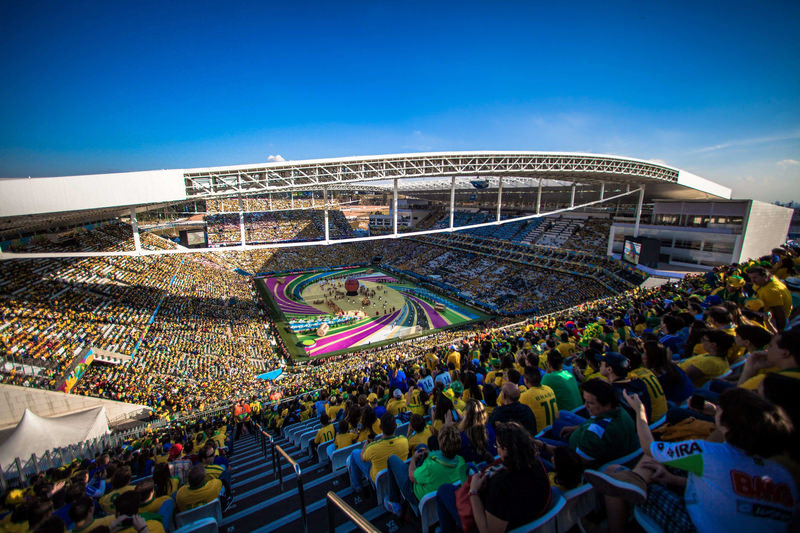 by Associated Press
Oct 15, 2015 12:00 am
Last year's World Cup in Brazil may have been the "cup of cups" for soccer fans, but for Brazilian taxpayers, who forked out some $11.5 billion for the month-long tournament, its legacy has proven negative, according to two new films.

"Brazil vs. Brazil" and "The March of the White Elephants" show the dark underbelly of the mega-event, which saw thousands of poor people removed from their homes and billions poured into state-of-the-art stadiums, some of which are now being used as parking lots or wedding venues. The critical documentaries, which screened at the Rio Film Festival that closes Wednesday, come as Brazil enters the final stretch before next year's Olympics in Rio de Janeiro and amid an unfurling corruption crisis at World Cup organizer FIFA.

"I think it was terrible for Brazilians," said Laura Colucci, a Sao Paulo native who co-produced "White Elephants" along with her South African husband, Neil Brandt.

"They felt betrayed, they felt embarrassed, they felt defeated," said Colucci, adding that the harm wrought by the tournament has gone well beyond Brazil's 7-1 pummeling by Germany in the semi-finals. In the year leading up to the 2014 tournament, many Brazilians were angered by the spiraling costs of preparations and the chronically woeful state of the country's public schools and hospitals. Thousands took to the streets in the biggest protests in a generation. Once the ball started rolling, however, most here left politics aside, embracing Brazil's five-time champion national team and the chance to host soccer's biggest event. The documentary directors come from very different backgrounds. "Brazil vs. Brazil" is by celebrated Brazilian director Marcos Prado, who produced the 2007 police drama "Elite Squad," while "White Elephants" is by Australian documentarian Craig Tanner. However, both reach similar conclusions about what hosting the World Cup meant for Brazil. Both films draw on interviews with similar sources, including anti-World Cup activists, academics, politicians and people who were forced out of their homes to make way for stadiums and other infrastructure.

Taxpayers, the films show, ended up stuck with the bill for stadiums that cost several times their initial estimates. Some were built in cities such as the remote agricultural capital of Cuiaba, which does not have a first-division soccer team. In some cities, including Rio, slum dwellers were pushed out of their homes, in principle to make room for parking lots or other facilities.

And with World Cup tickets out of the price range for most in this middle income nation, local spectators were overwhelmingly from the country's elite, exacerbating the divide between rich and poor in this most unequal of societies.

Today, without permanent tenants, those so-called "white elephant" stadiums are now playing host to the occasional wedding or are parking lots.

The only real winner from the 2014 World Cup, the films suggest, was FIFA. The Zurich, Switzerland-based not-for-profit posted revenues of nearly $5 billion off the Brazil World Cup. FIFA didn't respond to a request for comment on the films. Images of top Brazilian officials including President Dilma Rousseff and her predecessor and mentor, Luiz Inacio Luiz da Silva, embracing FIFA head Josep Blatter and other FIFA top brass drew groans from the crowds at the Rio Film Festival.

Both the FIFA officials and the Brazilian leaders have suffered major reversals of fortune since the World Cup. Criminal probes on two continents into allegations of large-scale corruption helped forced last week's suspension of Blatter, who had reigned over FIFA for 17 years.

In Brazil, Rousseff's political future appears uncertain amid a tanking economy and a spiraling investigation into corruption at the state-run oil giant at Petrobras that's ensnared lawmakers from her governing Workers' Party.

"There is nothing in the film that's new not one scrap of information in there that's not publically available with a Google search," said Brandt, co-producer of "White Elephants." "But when you join all the dots together, that's the eureka moment."