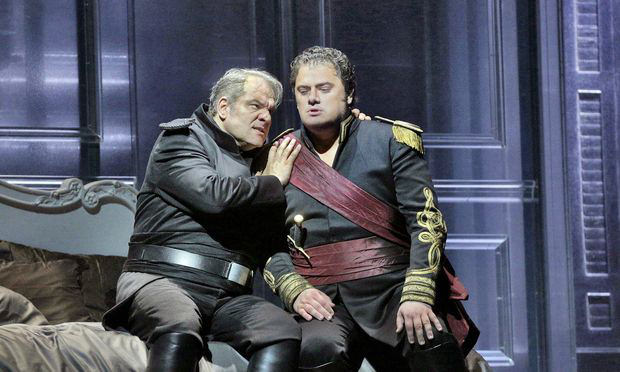 The Metropolitan Opera's newest performances will be screened through 4K high definition at Akmerkez Shopping Mall's Cinemapink Theater Halls. This Saturday will feature adaptation of Shakespeare's ‘Othello' by Guiseppe Verdi

Composed by Giuseppe Verdi during the last years of his life, "Othello," which is an operatic adaptation of William Shakespeare's namesake play, will be directed by Yannick Nezet-Seguin during a brand new production by Bartlett Sher. Latvian tenor Aleksandrs Antonenko will appear as Othello, who turns green with envy, while soprano Sonya Yoncheva will be Desdemona, Othello's innocent wife. Zelkjo Lucic will appear as Iago.

Set in Cyprus, toward the end of the 19th century, the Cypriots anxiously await the arrival of their governor, General Othello of the Venetian fleet, on a stormy day. The governor, which previously fought the Ottomans, anchors his glorious fleet. While the general and the governor are away from their home, a young Venetian Roderigo comes to Cyprus and falls in love with Othello's bride Desdemona. Iago secretly hates Othello as he promoted the officer Cassio instead of Iago; hence, he promises Roderigo to help him win the love of Desdemona. While the citizens celebrated the arrival of the new governor, Iago puts his evil plan into practice: Knowing Cassio can easily get drunk, Iago proposes a toast. Cassio immediately refuses this offer but as the toast is for the honor of the bride of the governor, he cannot refuse. After Cassio gets drunk, all Iago has to do is to provoke a fight between him and Roderigo. Although former governor Montano tries to break up the fight, he cannot get away from the rage of Cassio. Angry because of his soldiers' behaviors, Othello tries to maintain order. Upon seeing that Desdemona is uncomfortable due to the unrest, Othello revokes Cassio's promotion and dismisses everyone. Looking into each other's eyes, the love of Othello and Desdemona is recognized once again.

Iago makes a fool of Cassio and encourages him to open up to Desdemona in order to reclaim his former rank. When Iago is alone, he disrespectfully talks about Desdemona's love for Othello and shows the dangerous side of mankind. When Desdemona approaches Othello and asks a favor for Cassio, Othello, the most jealous man on earth, is suspicious. He makes excuses about having a headache and throws the handkerchief that Desdemona had given him earlier to the floor. Emilia, the wife of Iago as well as the first maid of Desdemona, hides the handkerchief and gives it to her husband. Catching Othello alone one day, Iago tells him that Cassio talks about Desdemona in his sleep and he previously saw Desdemona's handkerchief in the hands of Cassio. Burning with jealousy, Othello is convinced that his wife is unfaithful to him. Iago and Othello take an oath to punish both Cassio and Desdemona.

While everything is on track and Iago's plot operates like clockwork, he tells Othello that he will present more evince about his wife and Cassio's betrayal. A few minutes later, Desdemona comes to Othello and makes a request for Cassio. Othello makes an excuse and asks her to see the handkerchief that he gave her as present. Desdemona cannot show the handkerchief and Othello accuses her of being a prostitute by thinking that she gave it to Cassio. When he is alone, he feels sorry for himself and is regretful. Iago comes with Cassio and Othello hides himself in order to overhear what they are talking. Iago talks in a rather clever way to make Othello convinced that Cassio is having a secret affair with Desdemona. Cassio mentions a handkerchief that was given to him as a present from his secret admirer, even though the handkerchief was actually put in Cassio's room by Iago. Othello breaks down and vows to kill his wife. Meanwhile, a delegation from Venice, which calls Othello back, assigns Cassio as the governor of Cyprus. Upon the bad news, Othello loses his control and insults Desdemona in public. He orders everyone to disperse and has a seizure. While Cypriots praise Othello as the Lion of Venice, Iago insults Othello by saying, "Look at the Lion of Venice."

Emilia helps Desdemona before she goes to bed. When she completes her nightly prayers, Othello comes in and says he will wake her up with a kiss and then kill her. Desdemona objects and says that she is innocent. She is trembling in fear, and Othello strangles her. Emilia comes and informs that Cassio has killed Roderigo. The plot of Iago is then discovered and Othello realizes what he has done. He kills himself with a dagger, but he kisses his wife for the last time before he dies.
Last Update: Oct 16, 2015 2:30 am
RELATED TOPICS