Masters of world cinema to judge in Antalya Film Fest 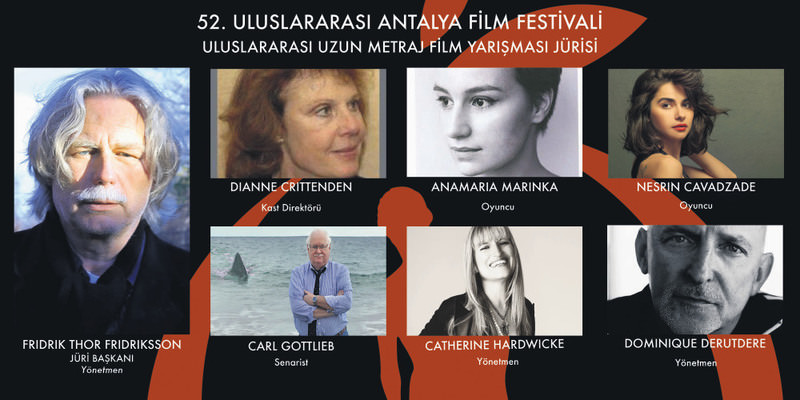 The competition films at the 52nd International Antalya Film Festival will be judged by a jury of veteran cinema figures, who will announce the winners at the closing ceremony that will be held on Dec. 6

Prominent figures of world cinema will come together for the 52nd International Antalya Film Festival, which will run from Nov. 29 to Dec. 6. The international jury will announce the winners at the closing ceremony at Cam Piramit on the night of Dec. 6 after watching the competition selection of 10 films including two Turkish productions. Apart from the Golden Orange Award for the best film, the festival will present the Golden Orange for the best director, best script, best music, best female actor and best male actor starting from this year. Moreover, the best film will receive 50,000 euros in prize money.

Under the presidency of veteran figure of Icelandic cinema Fridrik Thor Fridriksson, the international jury of the 52nd Antalya Film Festival will feature American director Catherine Hardwicke, who is known for her indie films, young and successful Romanian actress Anamaria Marinca, the scriptwriter of thriller masterpiece "Jaws" Carl Gottlieb, actress Nesrin Cavadzade who won her second Golden Orange with her role in "Kuzu" (Lamb) and veteran cast director Dianne Critenden, who is known for her cast work for "Star Wars."

Fridrik Thor Fridriksson is everything in Icelandic cinema. He founded the first cinema club in Iceland in 1974 and published the first cinema magazine in Iceland, Kvikmyndabladid. He initiated the Reykjavik Film Festival in 1978 and acted as the president for a very long time. In 1987, he founded the Icelandic Film Corporation, which later became the biggest production company in Iceland. He is internationally recognized after his collaborations with Lars Von Trier in his film "Zentropa" and Francis Ford Coppola in his film "American Zoetrope." Fridriksson, who directed his first feature length film Skytturna (While Whales) in 1987, was nominated for an Academy Award for Best Foreign Language Film for his second film, "Börn Natturunnar" (Children of Nature). A new generation of cinema lovers mostly know Fridriksson as the producer of von Trier's "Dancer in the Dark" and his acting in von Tier's "Direktoren for Det Hele" (The Boss of it All). Fridriksson's 2000 film "Englar Alheimsins" (Angels of the Universe) and 2010 film "Mamma Gogo" are his most popular films in Turkey.

Award-winner Catherine Hardwicke, the director of 2003 indie film "Thirteen," which brought an Academy Award nomination to actress Holly Hunter, is among the star-studded international jury at the Antalya Film Festival. Hardwicke, who made Evan Rachel Wood a Hollywood star with her role in "Thirteen," won various awards with her acclaimed 2003 film in the Locarno and Sundance film festivals. Although the director is known for her independent cinema, she directed the first film of the "Twilight Saga" series and proved herself in mainstream cinema as well. Throughout her career, the director has been happy to surprise her audience: "Lords of Dogtown" starring late actor Heath Ledger, "The Nativity Story" starring Oscar Isaac and "The Red Riding Hood" starring Amanda Seyfried became Hollywood hits. Her latest film, "Miss You Already," starring Drew Barrymore and Toni Collette, which made its world premiere at the Toronto Film Festival, will be screened at the Antalya Film Festival for the first time in Turkey.

Romanian actress Anamaria Marinca came under the spotlight with Cristian Mungiu's 2007 film "4 Luni, 3 Saptamâni si 2 Zile" (4 Months, 3 Weeks and 2 Days), which won the Palme d'Or at the Cannes Film Festival. After her role in Mungiu's striking film, Marinca became an actress who stars in the leading roles in international productions. Marinca, who was featured in veteran director Francis Ford Coppola's "Youth without Youth" in 2008, reinforced her resume with her roles in "Five Minutes of Heaven," "The Countess" and "Perfect Sense." She was last seen in "Fury" alongside Brad Pitt. Marinca will also act as a jury member at the Berlin Film Festival Shooting Stars jury in February 2016.

Carl Gottlieb, the scriptwriter for Steven Spielberg's "Jaws," one of the most famous thrillers of all time, will be on the jury. Nominated for a Golden Globe for Best Script with "Jaws," Gottlieb also wrote the scripts of the sequels of the film series. Apart from cinema films, he undertook the scriptwriting of various TV series and programs including Neil Simon's adaptation "The Odd Couple" and acted as the president of the Writers Guild of America (WGA) for a long time. Gottlieb, who also wrote the script for Steve Martin's classic comedy "The Jerk," continues his duty at WGA's board as general secretary. Gottlieb's novel "Caveman," which the scriptwriter adapted to the cinema, was adapted to the stage by Alper Kul in Turkey and sold out.

Azerbaijani actress Nesrin Cavadzade received her drama education at the Şahika Tekand Studio for Actors for two years following her graduation from the Marmara University Department of Cinema and Television. She began her TV career in "Yersiz Yurtsuz" (Homeless). With her role in "Dilber'in Sekiz Günü" (Dilber's Eight Days), which is the second film of Cemal Şan's love trilogy, Cavadzade won awards for best female actress at the Erzurum, Bursa and Ankara film festivals. The actress, who starred in Cemal Şan's film "Acı" (Pain), won the Golden Orange for Best Supporting Actress at the 48th Antalya Film Festival with her role in Hasan Tolga Pulat's 2011 film "Güzel Günler Göreceğiz" (To Better Days). The actress starred in Erol Mintaş's debut feature film, "Annemin Şarkısı," (Song of My Mother) and the production focusing on the Battle of Gallipoli "Son Mektup" (The Last Letter). Cavadzade won the Golden Orange for Best Female Actress at the 51st Antalya Film Festival for her role in Kutluğ Ataman's latest film "Kuzu" (Lamb). Apart from her achievements in Turkish cinema, Cavadzade has also been in international productions. She starred in the U.S. production "Legends" alongside with world-renowned British actor Sean Bean.

The most talented actors of the silver screen are at her finger tips. Internationally recognized casting director Dianne Critenden is among the jury members of the Antalya Film Festival International Jury. Cult films "Badlands," "Days of Heaven," "The Thin Red Line," the legendary "Star Wars," "3 Men and A Baby," "Green Card," "Black Rain" and "Pretty Woman," which made Julia Roberts a star, and "Little Boy" are among the films that Critenden cast.

Dominique Derrude has been interested in film-making since the day his brother got a camera and decided to make a film focusing on the life story of unorthodox poet and writer Charles Bukowski in 1986. The film "Crazy Love" became the shining star of film festivals and achieved incredible success. The film that helped him win Best Director at the San Sebastian Film Festival also allowed Francis Ford Coppola to bear a helping hand to Derrude. The young director worked with Coppola in "Zoetrope" and gained international fame. With his 2000 film "Everybody Famous!," the young director was nominated to Academy Award for best foreign language film.
RELATED TOPICS