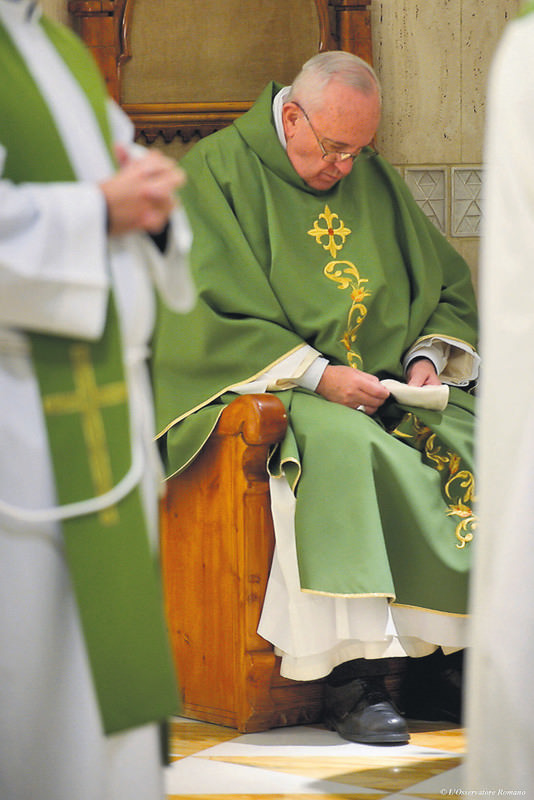 by Dec 02, 2015 12:00 am
The challenges faced by Pope Francis during the dark years of the Argentine military dictatorship (1976-1983) are portrayed in a new film, "Call Me Francesco," which will have its world premiere at the Vatican on Tuesday.

The film tells the story of the life of Jorge Mario Bergoglio, from his youth to his election as head of the Roman Catholic Church in March 2013. During the 98-minute biopic the audience gets a glimpse into Bergoglio's life as a young man in Buenos Aires, surrounded by Peronist friends and with a girlfriend he came close to proposing to before getting his calling to become a priest.

As the military dictatorship's grip tightens on the country, Bergoglio, now provincial superior of the Jesuits in Argentina, must walk the thin line between staying out of the generals' firing line and trying to protect those being persecuted, as friends, colleagues and acquaintances are "disappeared" and tortured around him.

Luchetti's film focuses on the character of Bergoglio, depicting him as an authoritarian but sensitive personality.

At the height of the dictatorship's repression, it shows the future pope hiding persecuted students in his seminary, helping people escape to exile and consoling the so-called "Mothers of the Plaza de Mayo" whose children were "disappeared" by the dictatorship.

Luchetti insists he has produced a realistic and balanced portrayal of the characters and events covered by the film. Those who still believe Bergoglio could have done more to speak out against the regime may not agree as the film largely steers clear of the issue of Church silence in the face of the dictatorship's use of torture and extrajudicial killings to silence dissent.

Pope Francis, 78, is played by two Latin American actors: the Argentine Rodrigo de la Serna in his period as a priest and bishop, and the Chilean Sergio Hernandez as the pontiff in his more recent years.

"It was a huge responsibility because of the historical and spiritual dimension of the character," said Serna, adding that while playing the role he got in touch with his own spiritual side and "learnt how to pray."

The Italian production cost $15 million and was filmed over 15 weeks in Argentina and Italy.

"Call me Francesco" is the second film to be made about Francis. "Francisco, el padre Jorge," by Spanish director Beda Docampo Feijoo and starring Argentine actor Dario Grandinetti was released in Argentina in September.
RELATED TOPICS