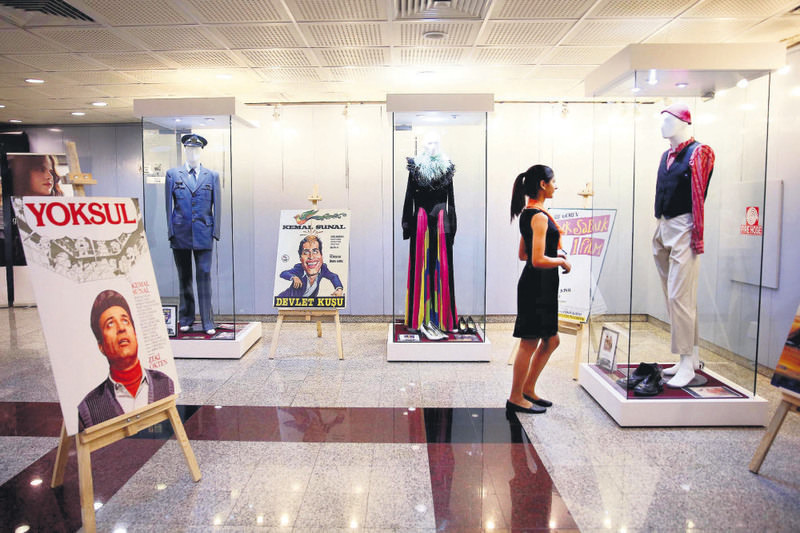 by Anadolu Agency Dec 02, 2015 12:00 am
An exhibition to commemorate the 15th anniversary of Turkish actor Kemal Sunal's death was opened at Antalya Cultural Center as part of the 52nd International Antalya Film Festival. The opening of the exhibition took place on Monday and was overseen by Sunal's wife Gül Sunal, his children Ali and Ezo Sunal and Antalya Metropolitan Municipality Mayor Menderes Türel and his wife Ebru Türel.

Gül Sunal was very emotional while cutting the opening ribbon. Taking a tour around the exhibition, Sunal talked to Mayor Türel about Kemal Sunal's clothes and personal effects. Speaking to the press following the opening ceremony, Gül Sunal said the exhibition held in the honor of her late husband made her "very emotional." She said she can never watch Kemal Sunal's film as they make her cry and said she kept all of his clothes and belongings in a closet at their home. "When we move to a new house, we first find a place for Kemal's belongings, then we move in. His belongings are the most precious objects in our house. Each piece is important and very special," Sunal said.

Describing opening the exhibition in memory of Kemal Sunal in Antalya as "very emotional," she said, "Kemal also won a Golden Orange Award at the Antalya Film Festival. It was the first Golden Orange to be given to a comedy actor. It was a very important award and Kemal was very happy when he first received it. The Antalya Film Festival always had a special place in Kemal's heart," Gül Sunal said.

Also speaking to the press, Antalya Metropolitan Municipality Mayor Menderes Türel said they were honored to hold an exhibition in memory of the legendary Sunal. He said Sunal left an "immortal legacy" behind and added people from every generation enjoy his films. The exhibition features clothes and belongings that the actor used in his films and personal life. Moreover, the exhibition also displays the red t-shirt he wore in the gym class scene of "Hababam Sınıfı" (Chaos Class) and the uniform he wore in "Süt Kardeşler" (The Foster Brothers).

Kemal Sunal won the Golden Orange for Best Actor at the Antalya Film Festival for his role in "Kapıcılar Kralı" (King of the Doormen) in 1977. He is one of the most unforgettable artists in Turkish cinema with his films and characters making an indelible mark on the local artistic landscape. He passed away in 2000 at the age of 55 leaving an incredible filmography behind him.
RELATED TOPICS