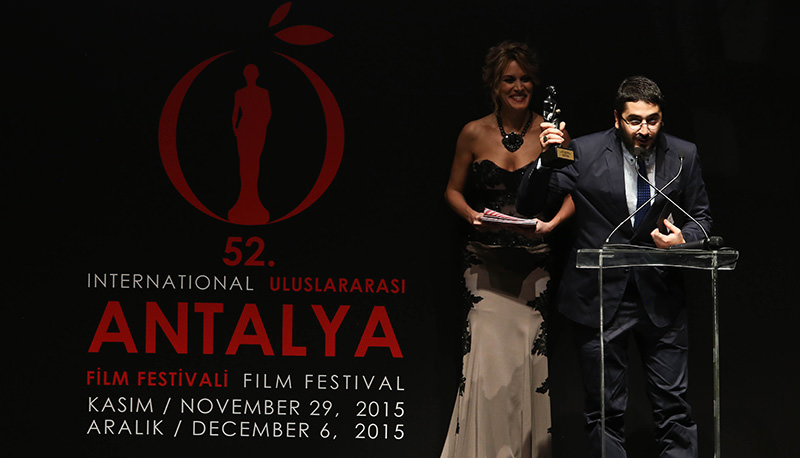 Before entering the ceremony hall, artists and filmmakers walked the red carpet, which has become a tradition for the festival.

Presented this year by actress Ebru Cündübeyoğlu, the ceremony will take place in two parts, starting this year, to avoid a jam and to provide the care each prize deserves in each category.

Awards in technical fields were given under the titles of Behlül Dal Jury Special Award, Avni Tolunay Special Jury Award, Film-Yön The Best Director Award in addition to The Audience Awards in both the short film and documentary categories.

Antalya Mayor Türel made the opening speech and talked about how big an accomplishment the film festival had been and how it has contributed to the development of a collective art like cinema.

Türel further explained that the aim of the festival is to grow each year and to promote the international visibility.

A total of 14 awards were given on Saturday night at the ceremony which will continue with part two on Sunday night as a total of 34 awards will be given.

The Work in Progress Award went to "İyilik" (Kindness) directed by Özgür Sevimli.

Besides the Antalya Forum Awards, films competing in the National genre were also awarded.

The Best First Film Award was given to "Çırak" (The Apprentice) directed by Emre Konuk.

Çiğdem Selışık was chosen the Best Supporting Actress for her performance in "Çırak."

The Best Supporting Actor Award was given to Kaan Çakır for his acting in "Muna."

The film "Team: For the Neighborhood" received the Best Art Director Award.

Emre Şahin received the Best Editing Award for the film.

Cinematographer Andreas Sinanos was awarded the Best Director of Photography in "Rüzgarın Hatıraları" (Memories of the Wind).

The Behlül Dal Jury Special Award went to actor Yağız Can Konyalı for his performance in "Team: For the Neighborhood."

The film "Kalandar Soğuğu" (The Cold of Kalandar) received the Avni Tolunay Jury Special Award. Director Selim Avcı was given the Film-Yön Best Director Award for the film "Saklı" (Hidden).