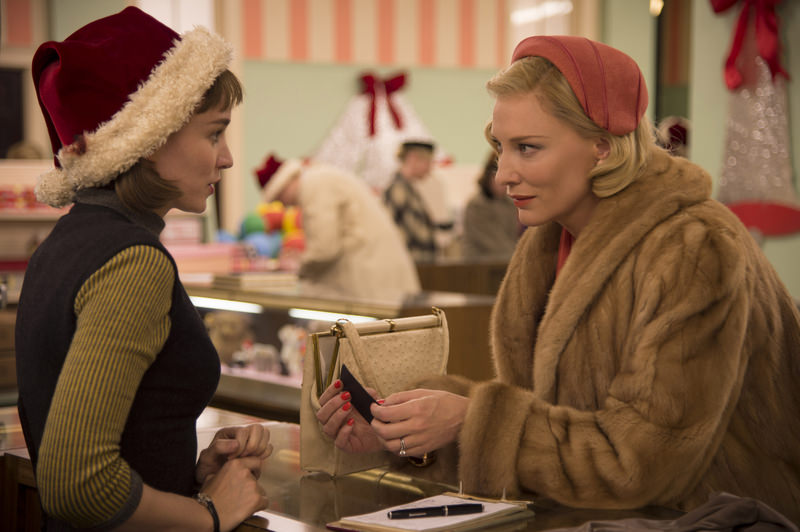 This photo provided by The Weinstein Company shows, Rooney Mara, left, as Therese Belivet, and Cate Blanchett, as Carol Aird, in a scene from the film, ,Carol., (AP Photo)
by Daily Sabah with AP Dec 10, 2015 12:00 am
This year's nominations for the 73rd Golden Globes are no less impressive than last year's and as always there are many surprises and snubs. Best motion Picture drama 'Carol' garnered the most nominations this year with five, while and Netflix had the network high of eight nominations.

Following is a list of key film nominees for the awards.

Ten actors received Golden Globe nominations for their roles in some of this year's funniest films.

Nominees for best animated feature are:
"Anomalisa," ''Inside Out," ''The Good Dinosaur," ''The Peanuts Movie" and "Shaun the Sheep Movie."

Nominees for best foreign language film are: "The Brand New Testament," ''The Club," ''The Fencer," Mustang," and "Son of Saul."

This year, streaming services seem to have edged out traditional television and cable networks for the most nominations.
Netflix leads all television creators with eight nominations, aided by its series "Orange Is the New Black" ''House of Cards" and "Narcos."

Cable networks HBO and Starz earned seven and six nominations during Thursday's announcement of the Globe nominations.
ABC received the most nominations of the traditional networks, with its show "American Crime" earning three of the network's four nominations.

The Golden Globe Awards will air Jan. 10 on NBC.

A Globes nomination can give a show, film or actor not only a bump in audience, but an edge in Hollywood's crowded awards season.

Ricky Gervais will return as host for the Globes when it airs on NBC on Jan. 10.