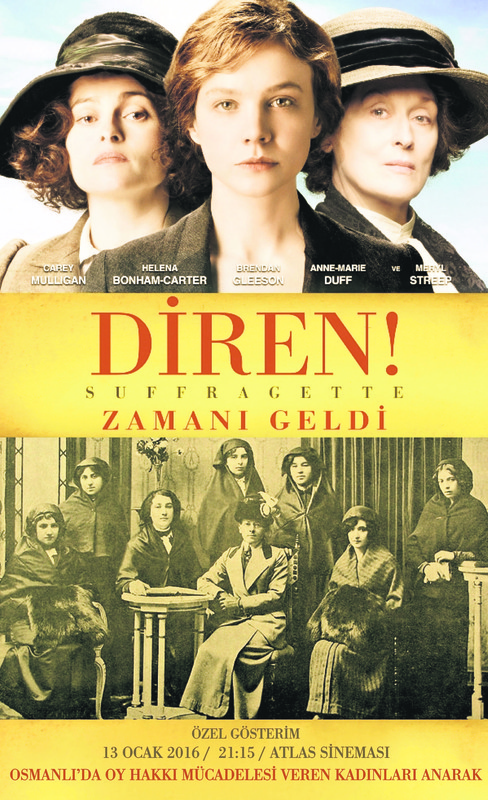 Dealing with the struggle of women's suffrage in England, the film "Resist! Suffragette" will be shown with co-operation with Bir Film, Filmmor and KA.DER, will have a special screening and premiere. The film will be screened on Wednesday, at the Beyoğlu Atlas Cinema and suffragettes in Turkey will be commemorated. The author of the book, "Ottoman Women's Movement," Istanbul University Faculty of Political Sciences faculty Professor Serpil Çakır will explain the struggle of women's rights that have not been transferred to the cinema and are outside official history. Prof. Çakır will present her presentation entitled "The Struggle for Women's Suffrage in Turkey."

During the special screening, the female deputies who were elected to parliament thanks to the 100 year long struggle will be present.

Undoubtedly, watching the struggle and resistance of all woman in "Resist! Suffragette," directed by Sarah Gavron, and starring Carey Mulligan, Helena Bonham-Carter, Anne Marie Duff, Romala Garai and Brendan Gleeson, will open horizons for both women and men. Tickets will be available at the Atlas Theater box office.

During the beginning of the 1890s, Ottoman suffragettes were mobilized with the motto "We are targeted and mocked by men for our gender. We will try to prove otherwise." They closely followed the suffragette rights movement in England in terms of educational rights, political rights and the fight for the right to live.

Miss İsmet Hakkı said to Demet magazine in 1908: "The intensity and constancy of the suffragettes in Britain is so great. Doesn't this show us directly that woman are, just like men, progressive and able to rise higher?"

In 1911, Miss Fatma Nesibe talked in the White Conferences, which were participated only by women, saying, "Ladies, be sure that we will not stay like this. One day, one great day, we will see that everything we saw higher and were afraid of will crawl beneath the ground we step on; all of this is a delusion of smoke; it will break and end. Pay attention that all around the world, we are the start of a revolution. Be sure that this reform will not be bloody and savage like a man's revolution. On the contrary, it will be decent and relatively quiet, yet it will surely be efficient. Believe in this, ladies!"
RELATED TOPICS