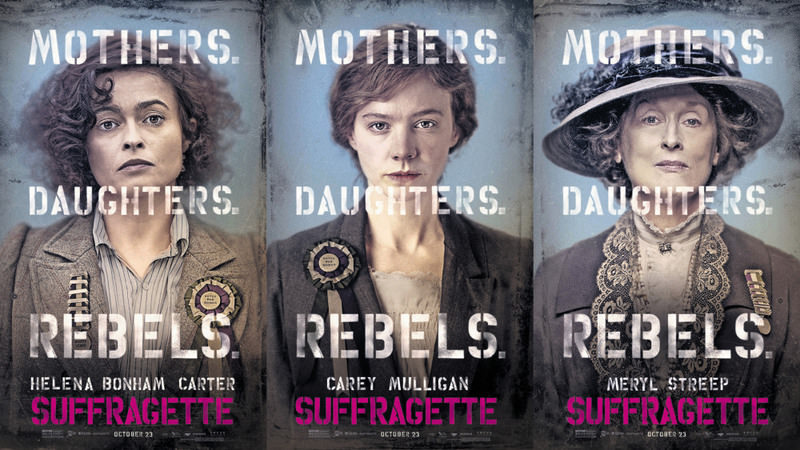 Depicting the struggle of British women before earned the right to vote, the film ‘Suffragette' premiered in Istanbul on Wednesday, and promises to open new horizon for both male and female audiences about women's rights

Women in long sleeves and long skirts gather in front of a parliament waiting for a decision taken by men, which, they hope, will make their lives more fulfilled and easier. A serious man in a suit appears and tells the gathered crowd that the bill to ensure their rights has not passed. The hopeful women who have campaigned long and hard are crushed. They start shouting, calling the politicians liars. Then the police move in and violently disperse them.

This is a scene that will strike a chord with most of us who have been involved with demonstrations that are particularly connected to legislation that will ensure equality among citizens. It will strike a chord with anyone who has been involved with women's movements anywhere in the world. It also strikes a chord with someone who has been involved with the movement to lift the headscarf ban in Turkey."Suffragette" (2015) follows the story of the fictional character Maud Watts (Carey Mulligan) who is portrayed as a woman who becomes a suffragette - from the word suffrage, which refers to the right to vote - almost despite her. She has a low paying but more or less secure job at a laundry service and a husband (Ben Wishaw) who loves her. She seems to have high hopes for her son, who seems to suffer from a respiratory disease, as many children exposed to the air of industrialized London did. When the philanthropist wife of a minister of parliament, Alice Haughton, tries to get some of the women who work at the laundry service to testify about the conditions under which women work in an effort to support their claim for voting rights, Maud gets to testify in the House of Commons.Director Sarah Gavron is very effective at recreating the atmosphere of the all-male, all suits environment of the British parliament in the scene where Maud walks into a small room full of men who will hear her testimony.

The only female "official" in the room is the typist, and you think - a hundred years later - the scene would now be different; however, it is just barely that. Now, out of the 20 people huddled in that room, three or four may be women. The film constantly reminds us that this is happening in another era, but just as we are about to congratulate ourselves on our progress, it makes us realize that things have gotten only marginally better given the amount of time that has passed since.The cast of the film itself reflects a certain kind of history of suffrage - that of the film industry - of female actresses who have been lucky enough to get central roles for women, which often means actresses who have been able to play something other than a "love interest" for leading men. Mulligan's character is introduced to the world of the suffragettes by the well-known real life suffragette and chemist Edith Ellyn, played by Helena Bonham-Carter, who, in turn, is inspired by the legendary Emmeline Pankhurst, played by Meryl Streep - who is quite a legend in her own profession. As part of a fictional lineage of suffragettes and a real-life lineage of screen-commanding actresses, Bonham-Carter has always been able to turn the madness written into many of the characters she has played into a source of power to dominate the scenes she has been in. In "Suffragette," she is on good form playing the ringleader - who uses her skills as a chemist to make bombs to be thrown into mailboxes in London to make enough noise and damage so that the women's cause does not escape the notice of ordinary Londoners. In her husband, we also have the prototypical yet noble male ally. He is pitched against Maud's husband who finds it difficult to understand his wife's involvement with the movement, as well as Alice's husband who is a minister of parliament and can tolerate his wife's "eccentricities" only to a certain point.

The film is not apologetic about the violence the suffragettes used to get their message across. Gavron spends the first quarter of the film showing us how the women are exploited, in all senses of the word, at Maud's laundry service. So, by the time we are introduced to the violent methods of the suffragettes, we know where they are coming from. When the owner of the laundromat abuses Maud after she has just spent her first night in prison for being an agitator - making implicit references to how he had sexually abused her when she was working as a child- she presses the iron steamer press hard on his hand - to much inner cheer for this viewer at least - and leaves the workhouse for good. This costs Maud her marriage and custody of her child, but once she experiences the joy of acting against injustice, it is impossible to look back.

Every time a woman does time in prison for engaging in protests, she gets another pin on her rosette, a female and urban counterpart to the decorations that men get on the battlefield for their contribution to the expansion of the British Empire - rank insignia that Virginia Woolf makes good fun of in "Three Guineas." The panic and terror caused by the suffragettes was no joke and is signaled by the detective that is assigned to the case to conduct the investigation against the suffragettes. The detective is played by Brendan Gleeson; he has a thick Irish accent and talks at one point about the Fenians. He gives long speeches to any suffragette he can get hold of about how the movement is using them and that they have a friend in the police force - the sort of speech that would not be out of place in a film about "the troubles."The film closes with a reference to a historical event that brought the suffragettes to international attention - an action that the group hopes to engage in from the beginning of the film. Our fictitious heroine Maud accompanies the historical figure Emily Davison in her fatal mission to the horse racecourse, where Davison hurls herself onto the course having opened the banner for the suffragettes. The film then fades into black and white footage of her funeral. As the women march, the viewer knows that it will be a long march toward equality indeed, and it is understandable that a viewer will want to reach for the fast-forward button to speed up things a bit.

A sense of slow progress is driven home at the end by the information provided on the screen about the dates of when women gained the right to vote in several countries around the world. Saudi Arabia naturally emerges as the last country where women are still expected to get the vote - which incidentally they partially did a few weeks after I saw the film. As usual, the Turkish audience takes a bit of pride in the fact that they were ahead in this contest, compared to some other European countries. But then, history in general and Turkey's history in particular reminds us of the incompleteness of this sense of triumph, as we question what kind of exclusions have been in place while certain women were allowed to enter the hallowed halls of democracy. We are reminded that universal suffrage for all citizens in any country remains mostly a work in progress, something to be continually worked at in order to include people of all genders, religious beliefs and ethnicities.
RELATED TOPICS