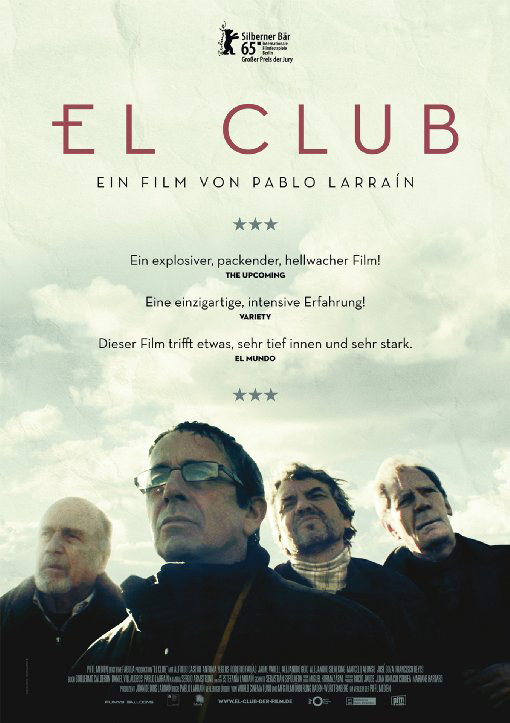 by daily sabah Jan 16, 2016 12:00 am
This week movie theaters will be premiering five new films, two of them domestic productions.

Directed by the director of Oscar-nominated "No," Pablo Larrain's latest film, "The Club," depicts the story of four priests who have been put into a small coastal town house by the church because of the crimes they had committed in the past. The Chilean dramatic film starts Roberto Farias, Alfredo Castro, Antonia Zegers and Marcelo Alonso.

Starring Tolgahan Sayışman, Murat Dalkılıç, Gonca Vuslateri, Gürkan Uygun, Ünal Yeter and Tuvana Türkay, "Byzantine Games" will opens this weekend. The comedy was both written and directed by Gani Müjde. Müjde said about the film: "The Mayans migrated from South America's heat and settled in the neighborhood of Bağcılar in Anatolia. The outstanding success of the Mayans was slowly recognized by the Byzantines and led to their hate for the Mayans. Although Byzantine king, King Klitor III, was a true friend of the Mayans, his wife and brother plan to stop the rise and development of the Mayans. According to the plan, Klitorya and Muhteris would first get rid of Klitor and after would kidnap all the Mayan women and put them into dungeons in Byzantium."

"My Brother" was directed by Mert Baykal and stars Burak Özçivit, Murat Boz, Aslı Enver and Ferdi Sancar. The dramatic comedy tells the emotional and funny journey of two brothers who have not talked to each other for a long time and have now come together to fulfill their father's last will and testament.

The animated film "The Good Dinosaur" was directed by Peter Sohn and the soundtrack was composed by Raymond Ochoa, Jeffrey Wright, Steve Zahn and Anne Paquin. This film from Disney's highly anticipated Pixar Animation Studios tries to answer "what would have happened to the world if the world changing asteroid had not hit the planet and dinosaurs had not been extinct?"
RELATED TOPICS