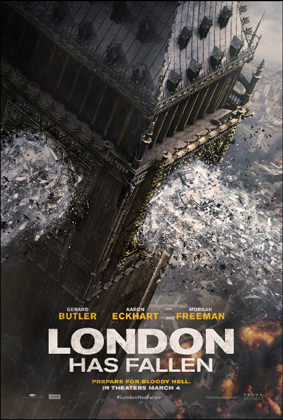 After the British Prime Minister has passed away under mysterious circumstances, all leaders of the Western world must attend his funeral. But what starts out as the most protected event on earth turns into a deadly plot to kill the world's most powerful leaders and unleash a terrifying vision of the future. The president of the United States, his formidable secret service head and an English MI-6 agent who trusts no one, are the only people that have any hope of stopping it. Starring Gerard Butler, Aaron Eckhart and Morgan Freeman, the sequel to the 2013 film "Olympus Has Fallen" is directed by Babak Najafi.

Directed by J. Blakeson, this science fiction film is about humans facing waves of attacks by hostile aliens. Four waves of increasingly deadly attacks have left most of the Earth in ruins. Against a backdrop of fear and distrust, Cassie is on the run, desperately trying to save her younger brother. As she prepares for the inevitable and lethal fifth wave, Cassie teams up with a young man who may become her final hope, if only she can trust him. Starring Chloe Grace Moretz, Nick Robinson, Ron Livingston and Maggie Siff, the film is adapted from Rick Yancey's young adult novel.

The Corpse of Anna Fritz

Starring Albert Carbo, Alba Ribas, Bernat Saumell and Cristian Valencia, the Spanish production is written and directed by Hector Hernendez Vicens. The film recounts the life and after life of Anna Fritz, who is a beautiful and famous actress. Her sudden death shocks her fans. When her dead body is taken to the morgue, Rau, one of the nurses in the hospital, takes a photo of the dead woman and sends it to his friends. However Pau's drunken friends find a way to break in to the hospital to see the dead actress with their own eyes.

Starring Mark Wahlberg, Will Ferrell and Thomas Haden Church, the comedy film "Daddy's Home" is the latest film of Sean Anders, the scriptwriter and director of "Horrible Bosses 2." Stepdad Brad Whitaker is a very easy going person with a warm heart, and a radio host trying to get his stepchildren to love him and call him Dad. However his plans turn upside down when the biological father, the macho Dusty, returns.

Directed by Özgür Yelence, this Turkish horror film stars Tolga Demircan, Merve Akaydın, Özgür Yelence and Ayşegül Kaygusuz. Inspired by true events, the film follows a group of young people who broke in to a house to film and the horrible faith that awaits them.

Written by Emrah and Murat Kaman brothers who made a name for themselves with cult Turkish TV series "Kardeş Payı" (Brother Share), this comedy film is directed by Murat Kaman and Defne Deliormanlı. Starring Zafer Algöz, Melek Baykal, Algı Eke, Cihan Ercan and Emrah Kaman, the comedy film is about a family who comes to Istanbul from Yozgat in order to find their son, who ran away for the sake of the girl he loves.
Last Update: Mar 04, 2016 9:34 pm
RELATED TOPICS