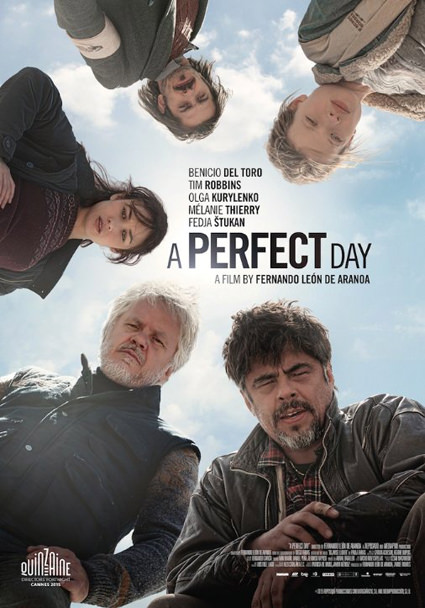 "A Perfect Day," which premiered at the Cannes Film Festival, is set in the Balkans in 1995 during the war, and follows the story of a group of aid workers trying to resolve a crisis in an armed conflict zone. Directed by Fernando Leon de Aranoa, the film stars Benicio Del, Tim Robbins, Olga Kurylenko and Melanie Thierry.

Set in the Black Sea region, the film is about a producer who moves back home after his project is canceled in Istanbul. The producer becomes the manager of a local TV channel, owned by the leader of a criminal organization. Starring Sadi Celil Cengiz, Enes Atış, Fırat Tanış, Tuğçe Kurşunoğlu, Zeynep Kankonde, Burak Satibol, Ceren Moray and Turkish pop star Burak Kut, "Olaylar Olaylar" is directed by Osman Taşçı.

A corrupt police officer and a team of thieves plan to carry out an impossible heist. They plan to manufacture a 999-code, which is police code for "officer down." When this code is announced, the other police team leaves its post to provide backup, enabling the gang of thieves to complete their heist. Starring Kate Winslet, Casey Affleck and Chiwetel Ejiofor, this Hollywood production was directed by John Hillcoat.

The Corpse of Anna Fritz

Starring Albert Carbo, Alba Ribas, Bernat Saumell and Cristian Valencia, this Spanish production is written and directed by Hector Hernendez Vicens. The film recounts the life and afterlife of Anna Fritz, a beautiful and famous actress. However, her sudden death shocks her fans. When her dead body is taken to the morgue, Pau, one of the nurses in the hospital, takes a photo of the dead woman and sends it to his friends. However, Pau's drunken friends find a way to break in to the hospital to see the dead actress with their own eyes.

Milly and Jess have been best friends forever, sharing everything since they were kids - secrets, clothes, laughs, substances, boyfriends, until one of them gets breast cancer. Starring Drew Barrymore, Toni Collette, Dominic Cooper and Paddy Considine, the film is directed by Catherine Hardwicke.