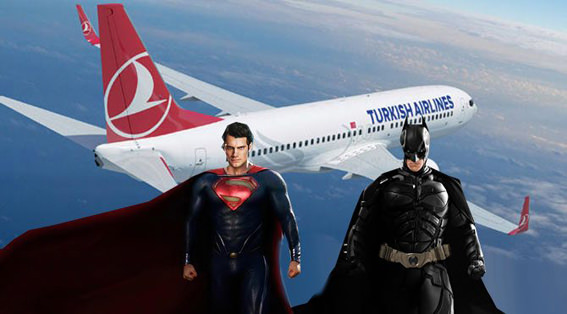 The highly anticipated "Batman V Superman: Dawn of Justice" movie, officially sponsored by Turkish Airlines, finally hits theaters on March 25. A series of colorful and exciting events related to the blockbuster movie can be visited at Zorlu Shopping Center from March 24 to April 25.

Zorlu Shopping Center has organized a series of activities for its guests to experience the excitement of "Batman V Superman: Dawn of Justice," which has reached millions of fans worldwide.

The special section organized for the event includes areas for children and adults as well as an exhibition area. Within the framework of the event, visitors can participate in an activity called "Which one is your mask," which enables them to choose accessories for Superman, Batman and Wonder Woman and share them online by printing the image immediately. Via an "eye tracker" device, participants will clean the city of criminals. They can also drive through Gotham City's streets in Batman's famous car, the "Batmobile," or Superman's "Drone" via a special censor installed on their arms. They will also have fun playing the Air Gun game.

In addition to the activities, a special Batman and Superman exhibition can be visited. In the 360-degree exhibition area, superhero costumes, sneak peaks and images from the movie, design art, action figures and accessories will be featured. With the "time to change" game, visitors can turn into their favorite characters - Superman, Batman and Wonder Woman - from the movie and share the transition video online. In addition, several entertaining activities await children as well as adults. After changing into costumes, the small participants can create their own designs for Batman's mask, Wonder Woman's tiara and Superman's chest symbol. They can keep their designs as souvenirs, discover their own powers via super power control and shoot at targets in Gotham City via an "air gun." If they want, they can get temporary tattoos of their favorite characters from specially prepared templates. While the activities take place from March 25 to April 12, the exhibition can be visited until April 24.