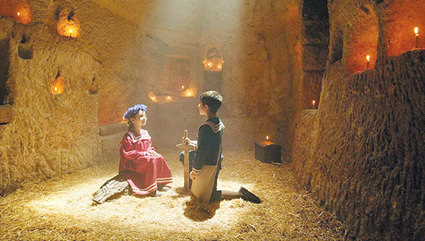 Starring Dila Uluca, Hegos Agopyan, Takuhi Bahar, Ahmet Uz, Arto Arsenyan, Sarkis Acemoğlu and Kirkor Dinçkayıkçı, the film was co-written and co-directed by Aren Perdeci and Ela Alyamaç. Set in an Armenian village in Anatolia, "Yitik Kuşlasr" depicts the Armenian deportation in 1915 and it is the first film about the 1915 incidents that has been filmed in Turkey. The film puts two siblings in the center of the events and follows their quest to search for their parents.

Somuncu Baba: The Secret of Love

The historical drama follows a young dervish who is looking for divine love. Through his epic and tough journey from Hijaz to Damascus, Bursa and Aksaray, the film focuses on concepts such as love, breakups, patience and modesty. Starring Furkan Palalı, Ali Sürmeli, Gürkan Uygun, Saruhan Hünel, Tuvana Türkay, Emin Olcay and Fırat Tanış, the film was directed by Kürşat Kızbaz.

Set in eighth century China, the film opens with the abduction of the general's daughter by a nun who initiates teaching her martial arts, transforming her into an exceptional assassin charged with eliminating cruel and corrupt local governors. Directed by Palme d'Or winner Hou Hsiao Hsien, the film stars Chen Chang, Qi Shu, Yun Zhou and Satoshi Tsumabuki.

Inspired by a true story, "Eddie the Eagle" depicts the tale of Michael Eddie Edwards who was a British ski jumper. Despite his unsuccessful results, Edwards was the symbol of tenacity and courage. Directed by Dexter Fletcher, the film features stars Taron Egerton and Hugh Jackman.

After getting in a car accident, a woman is held in a shelter with two men who claim the outside world is affected by a widespread chemical attack. Starring Mary Elizabeth Winstead, John Goodman and John Gallagher Jr., the film was directed by Dan Trachtenberg.

My Bakery in Brooklyn

The film follows two cousins who try to hold onto life, earn money and become adults after losing their parents in a car accident and being raised by their aunt. The cousins work hard to keep the bakery that they inherited open to honor the memory of their parents.

Directed by Max Fadeev, this Russian animated film is dubbed by Milla Jovovich, Sharon Stone, Joe Pesci and Whoopi Goldberg. The film tells the story of a 10-year-old boy who is living in a small village.