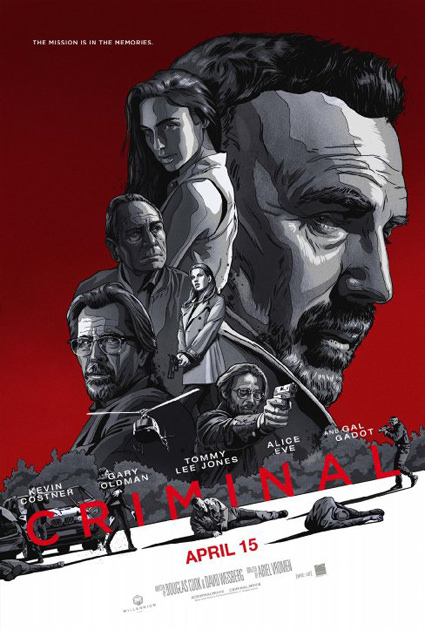 Directed by Ariel Vromen, "Criminal," stars Kevin Costner, Gary Oldman, Tommy Lee Jones, Gal Gadot, Alice Eve, Natalie Burn and Ryan Reynolds. The film recounts the events that occur after a dead CIA operative's memories, secrets and skills are implanted into a death-row inmate in hopes that he will complete the operative's mission.

Psychologist Peter Bower tragically loses his daughter in a traffic accident. While he copes with the guilt and sorrow, Peter discovers a strange secret about his patients. After piecing together their recounts, he discovers they are the ghosts of people who died on the same day 20 years ago. Starring Academy Award-winning actor Adrien Brody along with George Shevtsov, Robin McLeavy and Sam Neill, the thriller was directed by Michael Petroni.

The Other Side of the Door

Starring Sarah Wayne Callies, Jeremy Sisto, Javier Botet and Sofia Rosinsky, this film is about a woman who learns about a ritual that will bring her dead son back to life. But when she disobeys a sacred warning, she upsets the balance between life and death. The British horror film was directed by Johannes Roberts.

How to be Single

Set in New York, the city full of heart-broken people, the comedy "How to be Single" teaches the audience how to adapt to loneliness and introduces the life of single men and women. Starring Dakota Johnson, Rebel Wilson, Alison Brie, Nicholas Braun, Jason Mantzoukas and Leslie Mann, the film was directed by Christian Ditter.

Starring Anuk Steffen, Bruno Ganz and Isabelle Ottmann, the newest adaptation of Johanna Spyri's namesake novel was directed by Alain Gsponer. The film follows a young girl who lives in the Swiss Alps with her goat-herding grandfather.

Based on the stories of Rudyard Kipling and animated films of Walt Disney, "The Jungle Book" is directed by Jon Favreau. Dubbed by Scarlett Johansson, Christopher Walken, Ben Kingsley, Bill Murray and Idris Elba, the film recounts the adventures of a boy named Mowgli who was raised by wolves in the jungle.

Set in Istanbul's historical district of Tophane, the Turkish film "Fire" is about the struggle of two close friends to survive in the modern world. Starring Haluk Piyes, Büşra Ayaydın, Eren Hacısalihoğlu and Sacide Taşaner, the film was also directed by Piyes.

Yemekteydik ve Karar Verdim (We Were Dining and I Decided)

This film follows a Turkish man named Rıza Gürsoy and his family during Eid al-Adha (the Festival of Sacrifice). Starring Arzu Okay, Mehmet Güreli, Sema Poyraz and Gökçer Genç, the film competed at the 35th Istanbul Film Festival and was directed by Görkem Yeltan.

Mete Gümürhan's documentary "Young Wrestlers" follows the lives of 26 children who study at Amasya Wrestling Boarding School. It also candidly observes children during their trainings and encounters with their friends.