When Elvis met Nixon, he inspired a US comedy movie 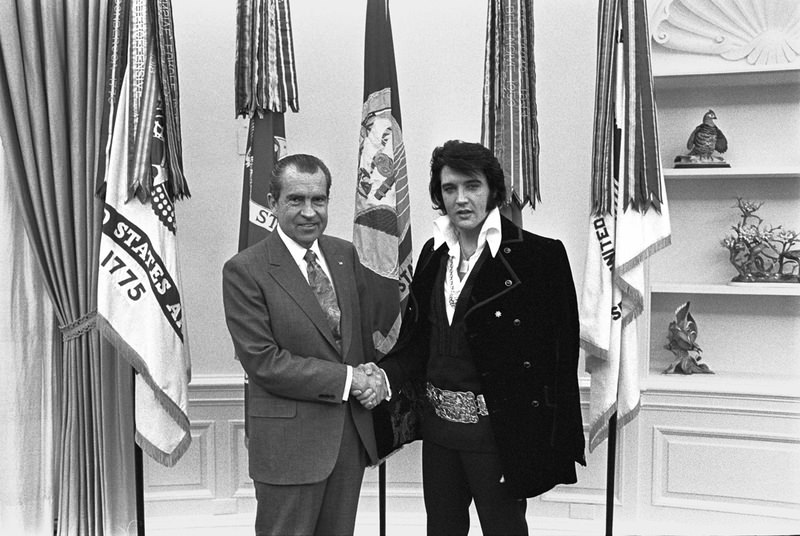 It is actually a picture of President Richard Nixon shaking hands with Elvis Presley in the Oval Office in December 1970 after the meeting between two pivotal figures in 20th century America.

"Elvis & Nixon," a comedy movie that reimagines their unlikely White House encounter, opens in U.S. theaters on Friday after premiering at New York's Tribeca film festival. It is distributed by Amazon Studios.

Kevin Spacey (Nixon) knows a thing or two about playing a president after years as the scheming Frank Underwood on the TV series "House of Cards." But Michael Shannon, who plays Presley, was just 3 years old when the singer died in 1977.

"We weren't, either of us, trying to do caricatures," Spacey, who spent hours listening to tapes of Nixon and watching video of the president, told Reuters in an interview.

There are no records of what exactly happened on the day when Presley requested a meeting with Nixon in a bid to become an undercover federal agent-at-large, and found a bond with the president over a shared dislike of the counterculture.

Nixon had not begun his secret Oval Office recordings, so the screenwriters relied largely on first-hand accounts from Presley confidant Jerry Schilling and Nixon aide Bud Krogh. Shannon, whose Presley is quiet, lonely and reflective, never imagined himself playing the "King of Rock 'n' Roll."

"I didn't go into it being a huge Elvis fan. I didn't have his records or anything," the Kentucky-born actor said. "But I am really happy I had a reason to investigate Elvis because there is nobody else like him, not just in terms of the scope of his fame but in the unique construct of his life. I think he was always trying to figure out 'why me?'"

Shannon listened to interviews and visited the tiny apartment in Memphis where Presley spent his teenage years. He also learned karate for a scene in which Presley demonstrated his black belt moves for an astonished Nixon. Spacey relished the chance to play a very different kind of president, and to present a rarely seen side of Nixon. "I just hoped that if I was able to create a Nixon who had enough of the qualities about who he particularly was, that people wouldn't think about Frank Underwood, even though I am on an Oval Office set."