9 films debut this week in theaters 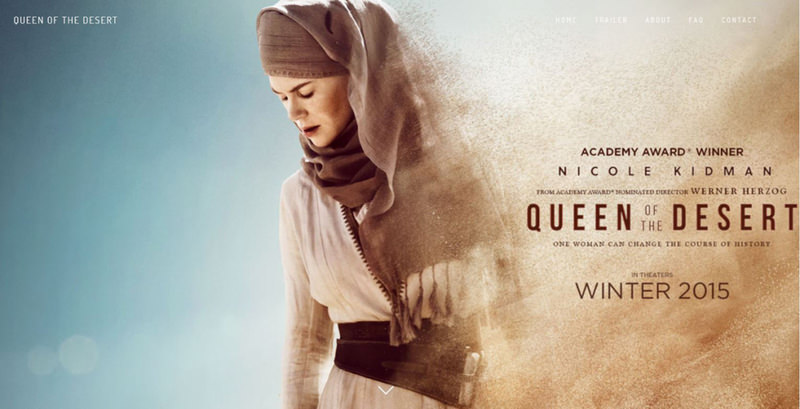 Directed by Werner Herzog, "Queen of the Desert," starring Nicole Kidman, Robert Pattinson, James Franco, Damian Lewis and Mark Lewis Jones, recounts the story of traveler, writer and archaeologist Gertrude Bell who worked as a political attache for the British Empire in the early 20th century.

Directed by Kemal Uzun, "Summer in Ankara: Farewell Letter," stars Gürkan Uygun, İpek Tuzcuoğlu, Münir Can Cindoruk and Burçin Abdullah and focuses on the aftermath of the Balgat Massacre in 1978.

Starring veteran actor Haldun Dormen alongside Asuman Dabak and Yüksel İnan, "Step-by-Step" follows disabled individuals and how they hold on to life with dance and music. The film was directed by Sinan Uzun.

The drama "Half" tells the story of a young girl who follows her new husband from rural, eastern Turkey to urban, western Turkey. The film stars Eca Tatay, Serhat Yiğit, Recep Yener and Hülya Böceklioğlu and was directed by Çağıl Nurhak Aydoğdu.

This horror film follows three friends and depicts what happens to them after deciding to shoot a horror film based on evil spirits. The film stars Özgür Özberk, Gülşah Çomoğlu, Fahri Öztezcan and Kirkor Dinçkayıkçı and was was co-directed by Özberk and Şahin Yiğit.

Written and directed by Orhan Eskiköy, the documentary film "President" follows a man who tries to find a solution to the Cyprus dispute.

The American horror film "Martyrs" is a remake of the namesake French horror film, which hit theaters in 2009. The American version of the film was co-directed by Kevin Goetz and Michael Goetz. It follows a young girl who was abducted by a cult when she was 10 years old.

The Man Who Knew Infinity

Inspired by a true story, "The Man Who Knew Infinity" recounts the story of an Indian mathematician named Srinivasa Ramanujan Iyengar who made extraordinary contributions to mathematical analysis, number theory, infinite series and continued fractions. It stars Dev Patel, Jeremy Irons and Toby Jones and was directed by Matt Brown.
RELATED TOPICS