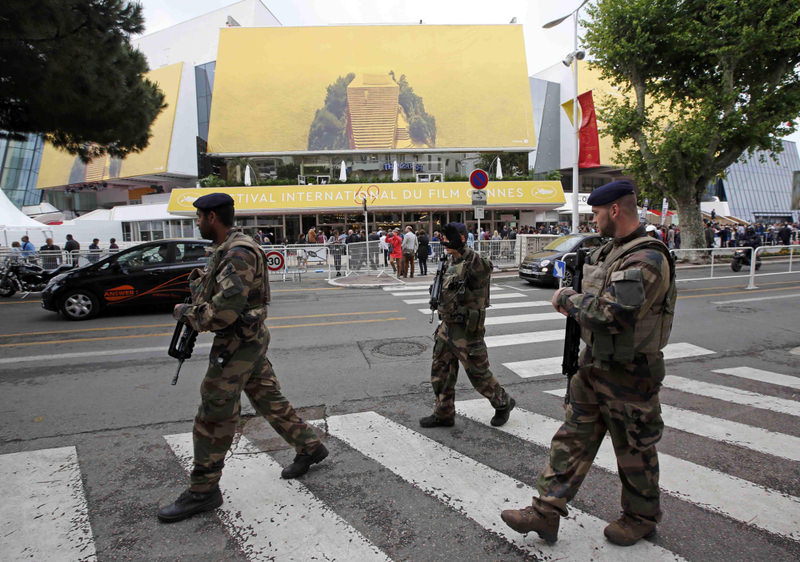 But with the state of emergency in France following the November attacks in Paris and the March bombings in Brussels, French Interior Minister Bernard Cazeneuve said "exceptional measures" had been introduced to ensure security at what is one of the world's most prestigious events.

Organizers have drafted 500 extra personnel to take charge of security at the Palais des Festivals, which lies at the heart of the festival and where the gala red-carpet premieres are held. A series of security drills were held in the run-up to the opening, with the Palais' ear-piercing alarm system ringing regularly and security personnel barring people from entering the building amid the final preparations.

Regular bomb sweeps will be conducted during the festival, overshadowing the glamor that normally pervades the Croisette - the palm-lined beachfront boulevard that cuts through the centre of the small Mediterranean resort town. Back to the Hollywood A-listers, the 80-year-old Allen will be launching the festival for the third time.

His new star-studded movie "Cafe Society" features Jesse Eisenberg as a young man who heads to Hollywood to try his luck, and meets and falls in love with a woman played by Kristen Stewart.

A total of 21 films have been selected for the festival's top award, the Palme d'Or, which is one of the most coveted prizes in the world of cinema. They include several new movies from directors who are just starting to make their mark on global filmmaking, such as Brazil's Kleber Mendonca Filho, France's Alain Guiraudie and Maren Ade, who is the first German director to be included in Cannes' main competition for eight years.

The nine-member jury, headed by Mad Max director George Miller, will also consider new movies from some directors who have been regular fixtures in Cannes' main competition when awarding the festival's top prizes on May 22. Among the old hands returning to Cannes this year are Spain's Pedro Almodovar, Belgium's Jean-Pierre Dardenne and Luc Dardenne, who are making a bid for their third Palme d'Or. Cannes' love affair with Britain's Ken Loach continues, with the screening of his new film I, Daniel Blake, while the Philippines' Brillante Mendoza is to make his fourth festival appearance. A large U.S. contingent is expected and Arkansas-born director Jeff Nichols will be back in Cannes for the third time to present a new hard-hitting film about inter-marriage in 1950s America. Former Cannes jury president Sean Penn is returning to the festival with his fifth movie as director, "The Last Face."