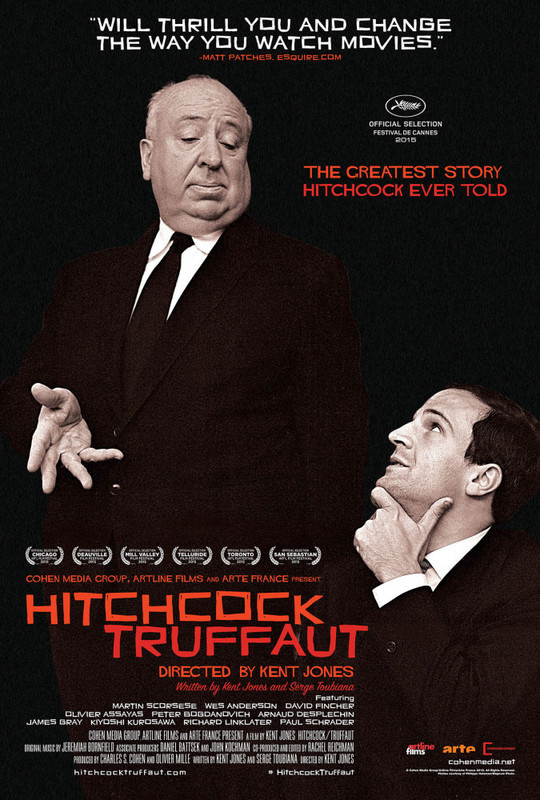 Starring Alfred Hitchcock, François Truffaut, Martin Scorsese and Wes Anderson, this documentary was directed by Kent Jones.The film focuses on the meeting of the directors Truffaut and Hitchcock. During the meeting, the two directors discuss features of Hitchcock's cinema and discover that their films have much in common.

Starring Ed Speleers, Shauna MacDonald, Elliot Cowan and Holly Weston, the horror film "Howl" follows the mysterious events that occur after passengers on a train are attacked by a creature. The passengers have to stay together and fight against this unknown creature to stay alive until the morning. The film is directed by Paul Hyett.

Directed by Nicholas Stoller, the sequel to the 2014 film "Neighbors" stars Seth Rogen, Zac Efron, Rose Byrne, Chloe Grace Moretz, Selena Gomez, Lisa Kudrow and David Franco. Mac (Rogen) and Kelly (Byrne) are ready to make the final move into adulthood, but just as they thought they have reclaimed the neighborhood, they learn that their new neighbors are even more out of control than the last. To evict them, they need help from their ex-neighbor (Efron).

Adapted to the screen from the acclaimed video game "Angry Birds," "The Angry Birds Movie" was directed by Fergal Reilly and Clay Kaytis. The film, which was dubbed by Peter Dinklage, Jason Sudeikis and Kate McKinnon, tries to make the audience understand why the birds are so angry. The film takes place on an island that is full of flightless birds.

Directed by Adem Kılıç, "Oflu Hoca'nın Şifresi" is the sequel of the 2014 comedy. Starring Çetin Altay, Ahmet Varlı, Köksal Engür and Başak Daşman, the film recounts the story of a man who tries to run for the mayor's office after a dispute he had with Hodja of Of.

This action film stars Murat Yıldırım, Ümit Acar, Yılmaz Şerif and Halit Karaata and follows a man known as Dadaş who lost his family during an attack. Dadaş decides to hunt down the organization that took the lives of his family. The film was directed by Selim Kemal Dağlı.

Having premiered at the International Venice Film Festival and receiving five awards at the Adana Altın Koza Film Festival, "Ana Yurdu", Senem Tüzen's first feature-length film, comes to theaters once again. Featuring Esra Bezen Bilgin and Nihal Koldaş, the film follows the story of Nesrin, who returns to her mother's cottage to finish her novel, and what happens when her mother decides to pay a visit to her daughter.