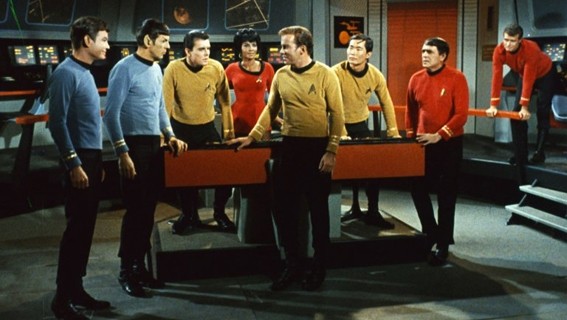 by French Press Agency - AFP May 26, 2016 12:00 am
It launched with a mission of just five years "to boldly go where no man has gone before," but half a century later "Star Trek" is a multi-billion-dollar cultural phenomenon adored by fans the world over. When the show debuted in 1966, the concept was a three-season TV show following the crew of the starship Enterprise as they ventured into the galaxy to seek out new civilizations. Little did NBC know that it would snowball into a touchstone in entertainment spawning six shows with a combined 725 episodes and 13 movies, and turning its stars into household names. "To be talking about the 50th anniversary is insane. I was born the same year that 'Star Trek' was," veteran filmmaker J. J. Abrams, the creative force behind the new "rebooted" trilogy, told a convention in Hollywood last week. "I know how old I feel, so the idea that this thing endures is incredible." The original series starred William Shatner, now 85, as the suave Captain James T. Kirk and Leonard Nimoy, who died last year at the age of 83, as his stilted sidekick - a half-human, half-Vulcan science officer named Mr. Spock.

Gene Roddenberry wrote the pilot in 1965, the same year as the first United States spacewalk, and pitched the show as "a wagon train to the stars," figuring that westerns were popular in Hollywood at the time. Fans say Roddenberry examined earthly social issues with an unparalleled sensitivity, presenting television's first truly multiracial cast and the first televised interracial kiss.

Korean-American actor John Cho, who plays Starfleet Officer Hikaru Sulu in the rebooted trilogy - including the upcoming 50th anniversary film "Star Trek Beyond" - describes multiculturalism as one of its "defining features." "I really believe theoretically in 'Star Trek' movies. It's a good cultural product, in my opinion. I wanted to be a part of something I felt was an important, positive cultural contribution," the 43-year-old told Agence France-Presse (AFP).

The franchise has attracted a devoted global cult unified by their affection for the Roddenberry vision, and today "Trekkies" are the only fan group listed by name in the Oxford English Dictionary.

Karl Urban, who plays the ship's doctor, Leonard "Bones" McCoy - the role originally made famous by the late DeForest Kelley - said "Beyond" was more complex and yet more fun than previous episodes.

medy hits including 2004's "Shaun of the Dead" and took on scriptwriting duties for "Beyond." "We wanted to make sure we got the balance right between paying respect and homage to what had been before - little inside jokes and references for long-term fans - and making it fresh and delivering new material that new audiences can appreciate," Urban, 43, told AFP.

Part of the enduring appeal of "Star Trek," said Urban, is its commitment to a hopeful depiction of a humanity united in the future despite differences in race and creed. "That, and getting it on with green girls," he immediately added.

The latest film hits U.S. theaters on July 22 but, whatever its fortunes, the "Star Trek" phenomenon will boldly go on, with a new television series due out from January 2017 on CBS. "It's been around for 50 years and hopefully we can build something that can continue it for another 50 years," said "Beyond" director Justin Lin, an action aficionado who made four of the "Fast and Furious" films. "What's so fun about being a part of this is that, with these characters and themes, we can go anywhere, we can evolve and they are going to run into new challenges. And there should be no boundaries."
RELATED TOPICS