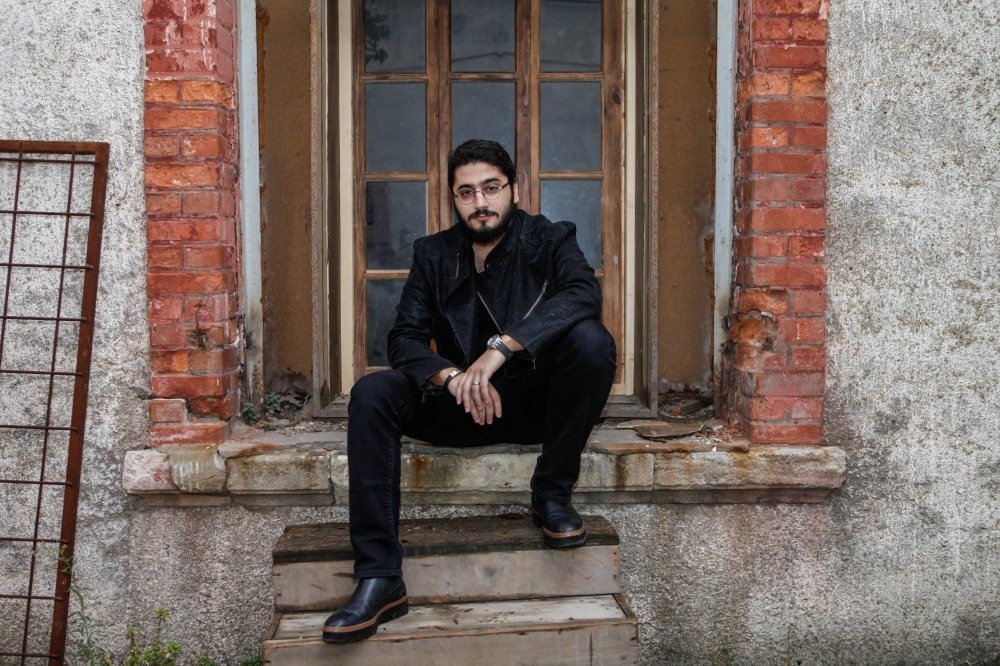 Director Emre Konuk has attended many festivals and received an award for his debut feature film. Konuk won the German Independence Award, the festival's top honor, in the 23rd International Oldenburg Film Festival a few weeks ago. Advancing quickly in his career, the director's life story is as impressive as his movie

Director Emre Konuk has attended many festivals and recently received an award for his first full-length movie "Çırak" (The Apprentice) as scriptwriter and director. He further advanced in the field after he won the "Best First Film Award" at the 52nd International Antalya Film Festival. Konuk, who said, "It was the Antalya Film Festival that discovered me," always returns with awards from festivals. Konuk won the German Independent Award in the 23rd International Oldenburg Film Festival a few weeks ago. The director of cinematography for movies such as "İz" (Trace), "Halam Geldi" (My Aunt Is Here) and "Siyah Karga" (Black Crow) and successfully advancing in directing, Konuk presents the staggering story of Alim, the obsessive and anxious protagonist of "The Apprentice." He also directed the TV series "Yunus Emre Aşkın Yolculuğu" (Yunus Emre: The Journey of Love) and identifies himself as a modern conservative director. His own life story is as impressive as his movie. I met Konuk in Beykoz Kundura Fabrikası where "The Apprentice" was set.

DAILY SABAH: How did your life story start? Can you tell us about your family?

EMRE KONUK: My life started strangely. My uncle set off for Ankara on the day I was born and died in a traffic accident. While a new life began, another life ended. That's why I don't have any childhood pictures. Our household was mourning my uncle, and no one thought about taking pictures of a baby. I grew up in a conservative family from Erzurum. All of my grandfathers and uncles are imams. Some of them had plans for me as well.

DS: Did they want you to be an imam?

EK: Yes, (laughing). My dad is a dental technician, probably the only person who doesn't work as an imam in my family. There was no pressure put on me by my family though. Once, when my grandpa died, one of the elders in the family came to the funeral home. He asked me what I was studying, and he had hearing problems. I said, "Cinema and TV." But because of his hearing problem, he didn't get it, and he said, "Ah, Imam Hatip School." What I mean by this example: You unavoidably feel that dominance in the family.

DS: So, were you trying to hide your field of study?

Yes, there is a strange perception of people working in the cinema industry in Turkey. If you are a director, then it means you are a perky, dilly-dallier or you do not have a plan for your future. It is how people here perceive those who work in this field. However, cinema is a branch of art, and I am in love with it.

DS: Being a director in a family whose members are dominantly imams, how did this story develop?

I used to analyze the character of my friends and write stories when I was in primary school. Then, I used to sell them for two or three liras. When my friends read them, they said they were learning their unknown characteristics. That's when I realized the power of the pen. I had enthusiasm for writing. In high school, our literature teacher gave us a story by Chekhov. There was an empty place at the end of the story for us to fill. I wrote the final part, and he told me it was exactly the same as what Chekhov originally wrote, which impressed me a lot. I wanted to learn more about Chekhov and read his stories.

DS: Was this the milestone in your path towards the cinema industry?

Maybe. Chekhov put certain parts of small lives together in one story. He took you into someone's life and then suddenly took you out of it. That's what most readers feel when they read his stories. After I learned more about Chekhov, I discovered some movies inspired by his stories. I gained familiarity with Russian literature -- Gogol, Tolstoy, Dostoyevsky. They have a rich literary history. So, it was actually Chekhov who paved my way to directing.

DS: I guess you watched many movies when you were in high school?

Yes, I even remember that I met with my friends and said, "Let's shoot a movie," but we didn't have a camera back then! We started to collect money in our class. There was a big, old camera in a bag in my mom's wardrobe, which was kept there as if it was a holy object. When I developed an interest in cinema, I thought I would use it to shoot a movie, but I didn't know how to use it, and I thought it didn't work. I asked my family to buy a camera for me, and even though most people in my family didn't believe my enthusiasm for it, my mom supported me. They finally bought me a camera. They always say, "The best camera is the one you have," which means it is not about the camera, it is about the story you are telling. We started to shoot a movie. I watched lots of educational videos for fiction, and in the end, a narrative was already shaped. They used to call me director in high school.

DS: Almost all members of your family are imams. Didn't they want to enroll you in the Faculty of Theology?

Some members of my family did. My mom always struggled to make my dreams come true, which was to be a director. We used to live in my grandma's home as a big family. My dad's business went well, and we moved to a luxurious place in Şişli. I went to Sait Çiftçi Primary School in Nişantaşı and Kurtuluş Lisesi. I had a great life back then, and I lived in opulence.

DS: What happened then?

My dad went bankrupt when I was preparing for university. I was confused; everything turned into a mess. We lost our home and other properties. We rented a house. I took the university entrance exam, and there were only cinema-television departments on my preference list. I got into the Department of Cinema of Beykent University. Registration was getting closer, but we didn't have money! My mom borrowed some money from family and her friends. I managed to register in the university. This was probably one of the cornerstones that made me who I am today. I was in a financially bad situation. I remember I went to the university with my dad's pants and jacket on. While everyone else was living in luxury, I was wearing my dad's clothes, which caused a lot of confusion and contradiction for me. On our first day, our teacher asked us what we want to do. The answer was directing in general. I said, "I want to be a scriptwriter first, then develop myself in technical issues in this field and then be a director." I did it. I am in love with cinema. I devoted my life to it and put pretty much all of my effort into it.

DS: How much did you add from yourself to "The Apprentice?"

I am a really anxious person. One day, I had heartache, and my friend told me it is because I slept on the left side. You can see the exact dialogue in the movie, as well. I realized I am easily affected by words and by what people say; then I started to test it. For example, when I told one of my friends that I didn't like his hairstyle, he immediately changed it. Look at the power of words! This was my inspiration. My mom was deeply traumatized when she lost her baby during pregnancy, and that was when panic attacks got into our family. She got over it thanks to her treatment. Alim, the character in "The Apprentice" also has panic attacks. His story actually comes from what I have been keeping inside for years. The movie was shaped after two painful years. "The Apprentice" tells the story of a tailor's apprentice who is trying to repair tears in his own life. In fact, everybody is striving to repair his or her own tears. "The Apprentice" will have two sequels, "Uşak" and "Hafız."

DS: There are many people who think a conservative background doesn't allow one to be an artist. What do you think about it?

It is not only non-conservative people who question and speak against the world order. Conservatives have had serious problems in this country, and cinema is an important means to express oneself. Here is my claim: If cinema existed in the period when Prophet Muhammad did, they might have used it as a communication tool. Cinema has such big power! There was a period when conservative artists directly delivered their messages through cinema. If you have a spiritual concern, your movie shouldn't blatantly focus on a Muslim or how he prays. One should use them as a metaphor or a detail. I identify myself as a conservative modern director. I mix my spirituality with Western cinema and express it with modern cinema.

DS: How did the International Antalya Film Festival change your life?

This festival discovered me as a director and helped me to gain self-confidence. A series of festivals followed the Antalya International Film Festival, and I received more awards in Istanbul, Ankara, Sydney, and Oldenburg. One of the most advantageous sides of working in cinema is that you shoot a movie and travel around the world. I applied to 10 more festivals.