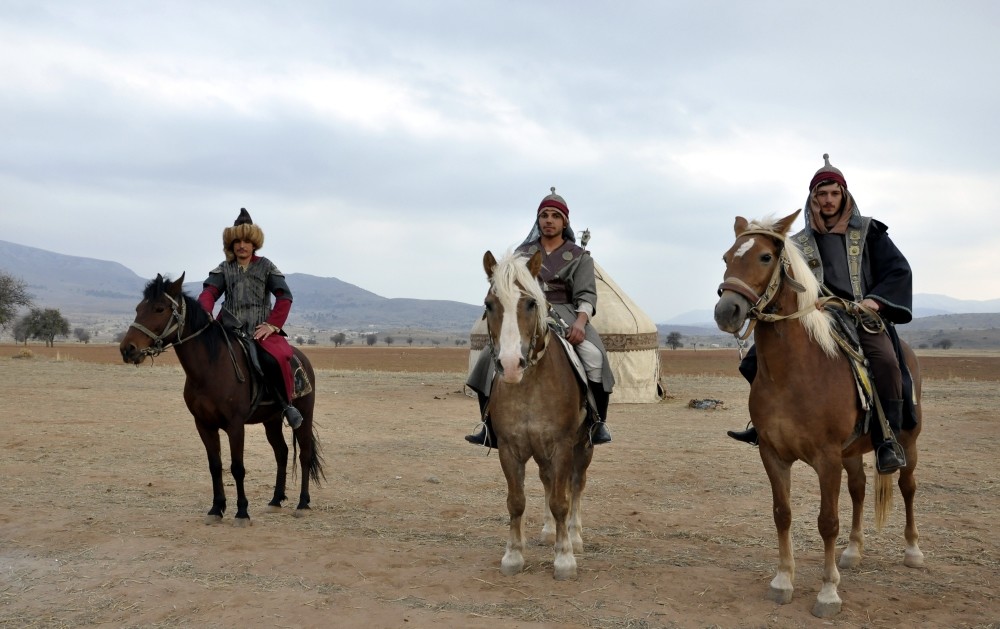 by Anadolu Agency
Nov 30, 2016 12:00 am
The historic journey of the Turks from small tribes to sweeping empires is coming to the silver screen in a 60-minute documentary. The traditions, wars, the prominent historic figures and the states that were established by the Turks will be narrated in a TV documentary. Filmed by the Türkmeneli Channel with contributions from Turkey's Culture and Tourism Ministry, the documentary titled, "Men Türkmenem, Men Begem," will narrate the journey of Turks from Central Asia to Anatolia and how they traveled in nomadic tribes, spreading through Asia and Asia Minor. The filming of the documentary, which will be broadcasted in Turkish, Arabic and English, kicked off last month in Mongolia.

Anadolu Agency (AA) visited the city of Konya, former capital of the Seljuks, where the director of the documentary spoke with an AA correspondent about the film. Film Director Didem Şahin said that the filming of the documentary is still ongoing and expected to continue for a long time in order to fully portray the journey of the Turks over several centuries.

Şahin said that the film will follow Turkish history all the way from the ancient Göktürks, to Seljuks and the Ottomans.

"The documentary starts with a wedding ceremony in Kirkuk. The story focuses on the traditions, excitement, and the colorful aspects of Turkmen culture. The journey through history begins with the wedding and we flashback to the beginning. We traveled to Orkhon in Mongolia and began shooting the documentary film in the former capital city of the Göktürks. There, we also filmed the scenes which narrate the lives of the nomadic Oğuz tribe. We erected an 'Oğuz Obası' where the Oğuz tribe erected their tents and lived. We created a living 'oba' with sheep, horses, warriors and local people," director Şahin said.

The film crew is currently filming how Seljuk, the founder of the Seljuks, left his "oba," the stories of Tuğrul and Çağrı beys as well as the Battle of Dandanaqan and the Battle of Manzikert after which the Turks were settled in the lands of Anatolia.

Şahin claimed that the most important feature of the documentary is that it builds a bridge between the past and present, saying, "This aspect of the film is what makes its narration stronger. Regarding the film's budget and the stories it covers, we can say that "Men Türkmenem, Men Begem" is the first documentary to narrate the history of the Turks. It is a documentary that unveils the colorful life of the birth of the Turkic states and ancient empires. A part of our cast is composed of professional actors while 20 Turkmen students from Selçuk University also participated in the filming. People put so much effort into bringing this documentary to life. Usually, these types of documentaries employ a didactic narration but we stick to the story telling. We put great importance to the preservation of the dramatic structure. Our biggest weapon is our narrative style. We continue filming and we have a long way to go. We have finished shooting in Mongolia and Konya and we are headed to Iraq. Once the filming is over, we will focus on the technical editing of the documentary. It is hard to set an exact date for the premiere but we will try to make the documentary ready by next summer."