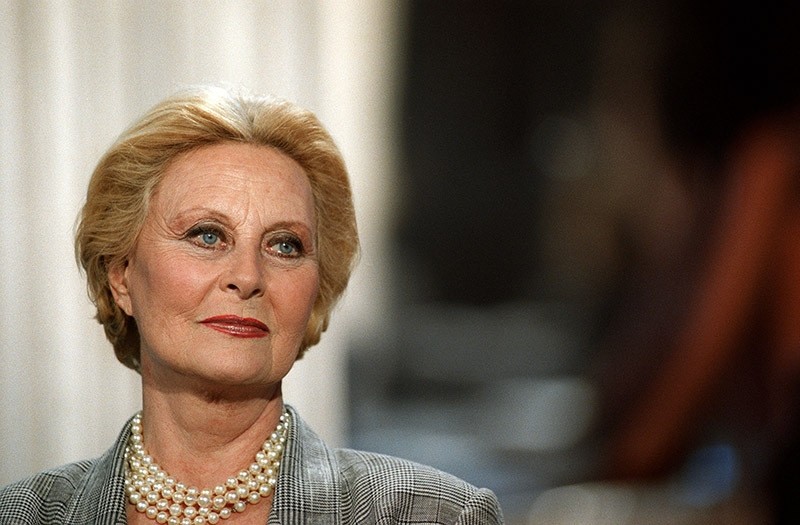 French screen legend Michèle Morgan, who starred in some 70 movies and took home the best actress prize at the first-ever Cannes film festival, died on Tuesday, aged 96, her family said.

An icon of glamour, Morgan was remembered for a regal azure gaze which she first turned on Jean Gabin as an 18-year-old ingenue in "Port of Shadows" ("Quai des Brumes"), a 1938 gangster movie.

"You've got lovely eyes, you know," he told her, forever sealing Morgan's fate in French filmography as the "most beautiful pair of eyes in cinema".

"It bothers me to hear that repeated so often", she was known to say much later -- though she still gave her 1977 memoirs the title "With eyes like that..."

"Michèle Morgan was more than just a gaze. She personified elegance and grace, and her legend left its mark on many generations," French President François Hollande said in a statement.

Claude Lelouch, who directed her in the 1975 "Cat and Mouse," paid tribute to her as "the one we all wanted to hold in our arms".

Morgan starred alongside Gabin, Jean Marais and Michel Simon, as well as Humphrey Bogart, and won her Cannes award in 1946 for her role as a blind woman in "La Symphonie Pastorale", Jean Delannoy's adaptation of an Andre Gide novel.

Her career flourished in the 1940s to 1960s, and faded with the arrival of New Wave cinema.

Nevertheless, as late as 1975 a poll of French cinema-goers crowned her for the 10th time the "most popular French actress".

Born Simone Roussel in the Parisian suburb of Neuilly on February 29, 1920 -- a leap-year date which allowed her to joke that the could "age four times more slowly than everyone else" -- she spent most of her childhood in the Normandy port of Dieppe.

She left home at 15 in the hopes of reaching fame like American-Swedish actress Greta Garbo, entered drama school in Paris, and soon won a bit part in her first film, "Mademoiselle Mozart".

Her first starring role under her adopted name of Michèle Morgan was in Marc Allegret's "Gribouille" (1937).

That was soon followed by her momentous encounter with Gabin, with whom she was to appear again in Jean Gremillon's "Remorque", released in 1942 during the German occupation of France.

Later that year Morgan left for the United States after marrying the American actor Bill Marshall.

There she made four films, playing opposite Frank Sinatra in "Higher and Higher" (1943) and Bogart in "Passage to Marseilles" (1944), director Michael Curtiz's unsuccessful attempt to repeat the Bogart-Bergman magic of "Casablanca".

The war over, and having failed to make a breakthrough in Hollywood, she returned to France in 1946.

She also starred in an English movie, Carol Reed's "The Fallen Idol" (1948), based on a Graham Greene novel.

One of the highlights of Morgan's late career as a stage actress was her role in Jean Cocteau's "Les Monstres Sacres" in 1992-93, in which she appeared once again alongside that other great veteran of French cinema, Jean Marais, then aged 79.

Despite decades of work, Morgan never equalled her role as the slant-eyed waif in beret and trenchcoat in the doomed, fatalist world of "Port of Shadows".

She married twice, first to Marshall, who died in 1959, then to Henri Vidal, whom she divorced. Her only child, Mike Marshall, from her first marriage, died of cancer in 2005, aged 60.

Morgan was made a commander of the Legion of Honour in 1994 and given the highest rank of the Ordre National du Merite in 2004.

In latter years, Morgan was a talented painter, saying, "It calms me. At the heart of it, I have always liked being alone. I've never been happier than when I am with my painting."