Film on Erdoğan's life premieres on his birthday 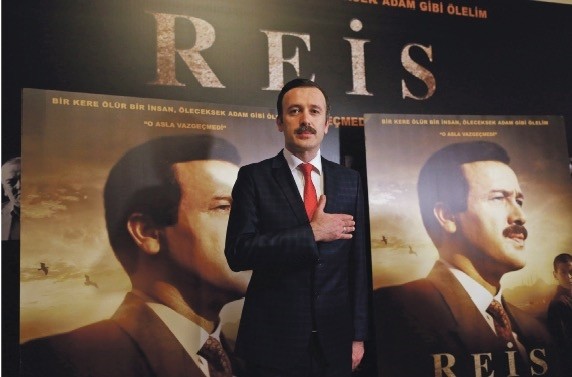 Turkish actor Reha Beyou011flu portrayed Turkeyu2019s President, Recep Tayyip Erdou011fan, in the film titled u201cReis.u201d
by Anadolu Agency Feb 28, 2017 12:00 am
The premiere of "Reis," one of the much anticipated films of the year that recounts the life story of Recep Tayyip Erdoğan, took place on the president's 62nd birthday on Sunday, Feb. 26 at the TİM Maslak Show Center.

The gala night of the film, which was written by Murat Özdil and directed by Hüdaverdi Yavuz, was overseen by the actors and the filming crew as well as recognized figures in Turkish cinema.

Actor Reha Beyoğlu, who plays Erdoğan in "Reis," said that they set the date for the premier as Feb. 26 as it is also President Erdoğan's birthday.

Stating that "Reis" marks the first film in Turkish cinema that refers to the president by his full name instead of portraying him through a representative character, Beyoğlu said, "I want to celebrate our president's birthday. I hope God will bless him with old age and he will be with us for many years to come. We became a part of this project willingly and did our job with love. We did the best we can for the film."

Beyoğlu offered insights into the film's plot and said "Reis" recounts President Erdoğan's life starting from his childhood and covers the milestones of his life such as the time he served as the mayor of the Istanbul Metropolitan Municipality as well as his time in prison.

"The filming took three months. I am happy and proud to be in this film. I believe that our hard work will be appreciated at the box office as well. I hope a sequel will follow. Unlike common belief, President Erdoğan did not interfere with the film," Beyoğlu said.

Stressing that "Reis" focuses on Erdoğan's communication skills with the people, Beyoğlu continued, "This is not a film that is shot for political propaganda. The film is very important to us. In fact, we want the film to hit the theaters today; however, since films are introduced to the theaters on Fridays, we decided to wait for March 3."

Actress Özlem Balcı, who plays Emine Erdoğan, President Erdoğan's wife, in the film, said "Reis" is a film that was extensively researched.

Balcı expressed her happiness to play Emine Erdoğan in the film and said, "This was the best offer that I have ever received in my life. I accepted the role without even thinking. I guess there is no other actress that can play this role more enthusiastically than I did. I do not believe that I look like Mrs. Erdoğan physically but I guess we are similar in spirit. During the pre-production phase of 'Reis,' I conducted detailed observations about Mrs. Erdoğan's life. She is a strong woman who can stand against hardships and she is one of the best mothers that I have ever seen. Our view of life is almost the same. Mrs. Erdoğan is a woman that I feel close to."

Starring Ercan Demirel, İsmail Hakkı, Işık Yıldız, Volkan Başaran and Ayhan Eroğlu, "Reis" was filmed in the Turkish Republic of Northern Cyprus, Istanbul, Kırklareli and Bursa. The 90-minute film was produce by Temel Kankıran. Also, the music of the film was written by Yücel Arzen.