America in black and white

u201cManchester by the Seau201d is a very white film: It takes place in Massachusetts in winter, and the snow itself becomes a character.
by Nagihan Haliloğlu Mar 18, 2017 12:00 am

Two Oscar winning films, ‘Moonlight' for best picture, best supporting actor and best adapted screenplay, and ‘Manchester by Sea,' which won best actor and best original screenplay, represent two disparate worlds that exist in the U.S., and provide a look at the state of the union

My local cinema's double bill at the moment is "Manchester by the Sea" and "Moonlight." One could hardly find two films that complement one another better in giving a sense of the different communities that exist in the vast country of the U.S. "La La Land," the other much-talked- about American film currently, with its Technicolor glare doing justice to its title and emphasizing its artificiality, is totally of another register. Compared to "La La Land," both "Manchester by the Sea" and "Moonlight" are naturalistic, measured and in a sense monochrome, and want to focus our attention on particular locations in the U.S.

"Manchester by the Sea," directed by Kenneth Lonergan, is a very white film: it takes place in Massachusetts in winter, and the snow itself becomes a character. It becomes the white camouflage material that descends on a white world, muffling the miseries that the white characters may be feeling in their whitewashed wooden houses. It becomes the object of the Sisyphus-like efforts of the protagonist Lee as he shovels it off every day from the entryways of the flats where he works as janitor, like a repeating, misleading metaphor that promises he may come out of his shell if he has shoveled enough of this white material away. The predicament of whiteness is compounded when Lee's brother dies, and they cannot bury him because of the whiteness covering the earth, because the white stuff has made the ground too stiff, this bit of newfoundland, the first bit of the land of Massachusetts, refuses to take the white body in itself.

The strong bond that the good white people of Manchester-by-the Sea have with the sea is redolent of those first Pilgrim Fathers who set foot on these very shores and carried even the name of the town they would build with them from across the ocean. The only black person in the sea of whiteness we see in the film is one of the tenants that Lee visits on a job in Quincy, where he now lives. And when the scene shifts to Manchester by the Sea where Lee is from and where the defining tragedy of his life happened, there is not a black soul to be seen. 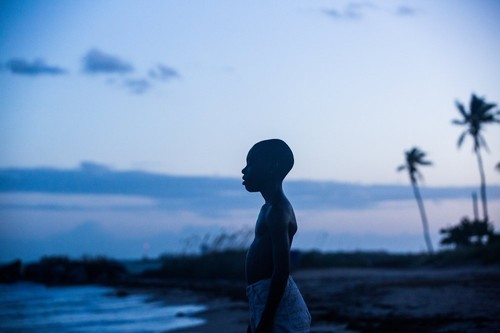 "Moonlight" is set in Miami, home of the one shoreline where America experiences the plight of people who get on boats to try to seek a safer place to live. The color blue seems organically attached to the blackness we see in the film. There is not a single white person in the film.

When we see the black bodies of "Moonlight" in the sea, however, our associations are different. We follow the story of Chiron in chapters from a schoolchild in Miami to a drug dealer in Georgia. The father figure Juan is played by Mahershala Ali, who won the Best Supporting Actor Oscar (and yes he is a Muslim). Juan, originally from Cuba, teaches Chiron to swim. An older man of African descent teaching a boy of African descent how to survive in the water is a moment dense with historical and contemporary meanings. The film is set in Miami, home of the one shoreline where America experiences the plight of people who get on boats to try to seek a safer place to live.

This scene, as with many others in the film, takes place at night, and Juan tells a story of how a Cuban grandmother told him how black boys look blue in moonlight. The color blue seems organically attached to the blackness we see in the film. In contrast to the winter in Massachusetts where everything seems to close in on itself, Miami is forever summer, with family dramas and personal revelations happening out of doors. There is not a single white person in "Moonlight". I guess that while black skin turns blue in the moonlight, white skin becomes completely invisible.

Both films have a lot to say about male bonding. Lee in "Manchester by the Sea" becomes the legal guardian of his 16-year-old nephew Patrick- a job that seems to consist of organizing his sexual escapades. When Patrick asks him to keep quiet about how he's seeing two girls at the same time, Lee does not think to tell his nephew that the girls in question may want to know and decide on their relationship accordingly. Contrast this to the scene where Juan, the surrogate father figure in "Moonlight", tells a much younger Chiron, when Chiron asks what "Faggot" means, that it's a name people use when they want to hurt gay people.

Juan's parenting abilities seem more promising than Lee's- and yet, when Chiron asks him if he sells drugs, Juan feels he cannot lie, and in the same moral vein tells the truth, after which he breaks down and cries. Although this may look like a moment of failure, it is this very truth and support that Chiron receives that makes him come back to Juan's house when things get difficult with his negligent mother.

The support in Juan's home is equally, if not more, provided by his girlfriend Teresa, played by Janelle Monae. Monae has incredible command of the screen when she is on it, beautiful, graceful, and demanding to be looked at and listened to (watch out for her in "Hidden Figures"). Like Chiron we hang on to her words. When compared with the emotional chemistry that is palpable between Teresa and Chiron, the scenes with his mother fall short, particularly when she's trying to apologize for years of neglect, although the director Berry Jenkins tries to inject life into them with music and lighting that look like an homage to his favorite filmmaker Wong Kar-wai ( See "In the Mood for Love").

The apology scene in "Manchester by the Sea", however, is of another kind. It is when all the emotion repressed by Lee almost washes over the screen- but here, too, the emotional labor is carried out by the woman, his ex-wife, played byMichelle Williams as she cries and begs forgiveness for the way she treated him after a tragedy that was actually, intentional or not, Lee's fault. The casting of Williams is a stroke of genius as she played in the long running (1998-2003) popular TV show "Dawson's Creek," set in a similar East Coast town and a very similar white community. Those familiar with the show will feel they already know her and her background, and find it easier to identify with her grief.

The passiveness of Lee's face - which won Casey Affleck his Oscar - is a front for the pent up emotion inside, which, in his "manliness" he shows only through the random fights he picks up in bars. When we see Lee earlier in the film, healthy, handsome, articulate, doing such a meanly and menial job, as audience we are implicitly invited to imagine that "something must have gone wrong" for him to end up like that. With Chiron, however, the trajectory seems almost inevitable when he follows in the footstep of the one man who has shown him any fatherly guidance. Both films depict men and to a certain degree women fighting their demons. Neither the black nor the white protagonist find "closure" in the end but both directors, Jenkins and Lonergan, are generous enough to offer their heroes moments of consolation.
RELATED TOPICS