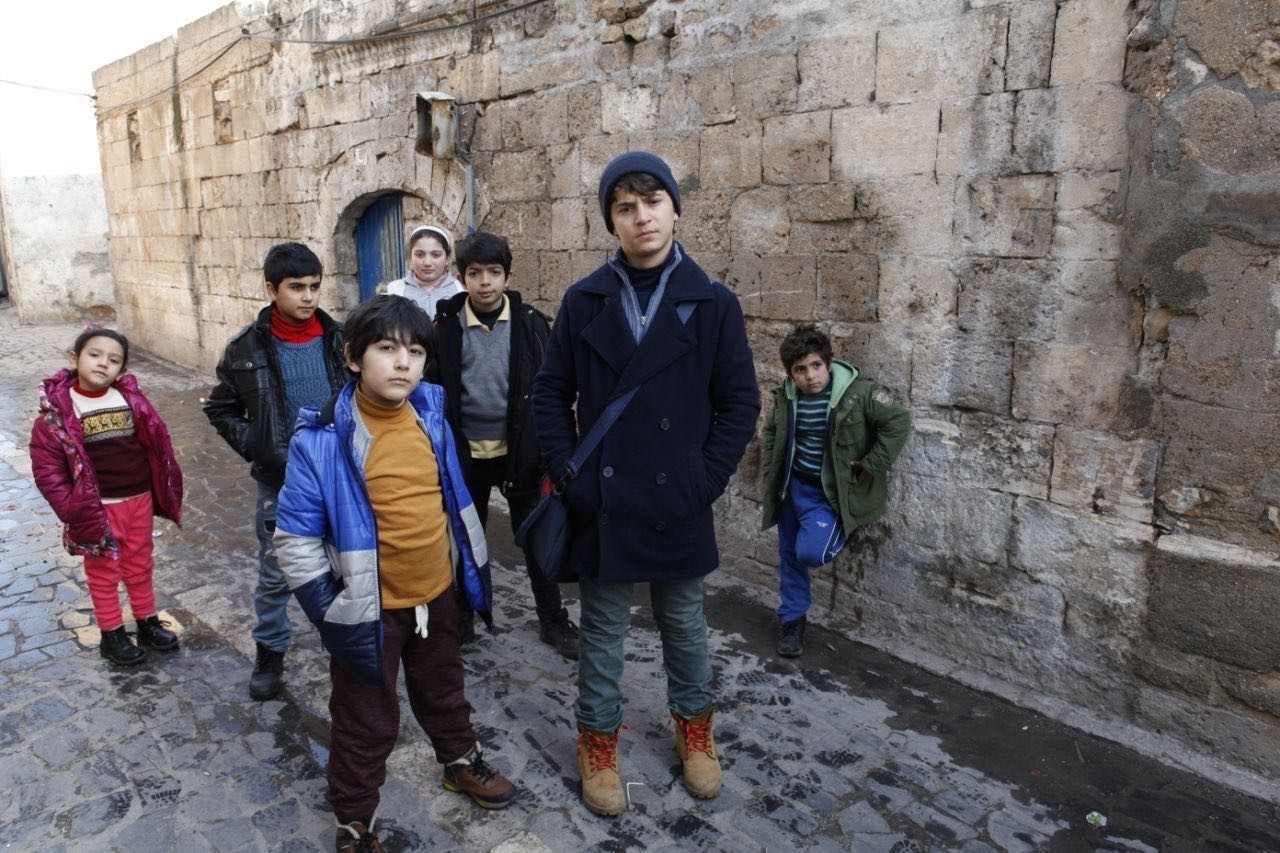 Focusing on orphans in war, Bosnian director Aida Begic tells the true story of Syrian orphans living in Turkey in her new movie called 'Bırakma Beni' (Never Leave Me,) offering an opportunity for everyone to understand that the pain suffered in war belongs to us as much as it does to others

Bosnian director Aida Begic has made a new movie about Syrian orphans. What makes the movie so realistic is that Begic gives real Syrian orphans living in Turkish refugee camps a voice. Before shooting the film in southeastern Şanlıurfa province, many workshops were organized with Syrian orphans to prepare them for acting experiences. Preparation for the movie lasted one-and-a-half years.

Begic has directed eight movies and portrays lonely women, orphans, social transformation and problems that emerged after the Bosnian War in her movies including "Snijec" (Snow) and "Djeca" (Children of Sarajevo). She has won numerous awards including the Grand Prix in The Critics' Week and Special Distinction Award in Cannes. She has also worked as a professor in the directing department at the Sarajevo University Academy of Performing Arts for the last 17 years and now she is the head of directing department there. After living through the Bosnian War, she conducted numerous workshops with Bosnian children and as a result of these experiences, Begic will release a movie about orphans and war in autumn in Turkey and then in other countries. She chose the title "Bırakma Beni" which means "Never Leave Me" in Turkish. Being a female director, Begic proposes a different perspective and a deeper sensitiveness about the inner world of people suffering the blow of misfortune because of war. Before the release of her film in autumn, Begic spoke about her movie to Daily Sabah. 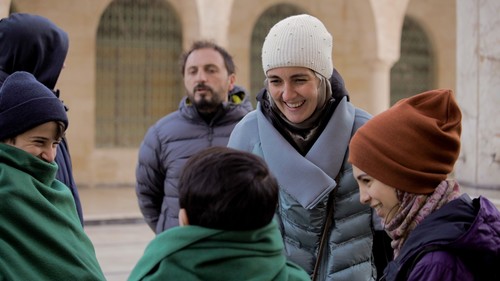 She said that her movie is a part of the "Yetim Project" that is dedicated to raising awareness about the issue of orphans around the world. "The project's aim is to reveal to the audience what orphaned children are going through. The children appearing in this movie are also refugees and that makes their tragedy even more complex and tough, "she said.

Begic remarks that as a woman and a mother she is very sensitive to these subjects, which is what makes her movies so special. Her previous works in Bosnia also focused on those whose voices you cannot easily hear - mostly women and children who survived the last Bosnian war. "I was a teenage girl when I experienced the siege of Sarajevo, so I recognized myself, my friends and my family in the faces of those Syrian kids," Begic said.

She says all of humanity lives through the same pains: "When you remove political, historical and linguistic layers from one tragedy, what remains is the pain of the innocent. Thus, the aim of this project is also to show how boundaries between people are always artificial. We all love, suffer and hope in the same way, no matter if we are Bosnians, Turks, Arabs or Chinese."

'Orphans are a trust from the creator'

Orphans are one of the most fragile sections of society in the world. Begic points out that orphans are our responsibility. "Their perception of the world, justice and love will come from how we treat them. They are also the legacy left to us from our Creator. We cannot stay blind or too busy to deal with children who need us. When I were conducting research for my film "Children of Sarajevo," I found out that 90 percent of juvenile delinquents are children who lost one or both parents during the war," she said.

Begic emphasized the result of ignoring those children would be so bad for humanity: "In Bosnia, no one paid enough attention to these kids and they became so lonely, which led them to drugs, destruction and crime. Money is not the one that can solve the problems of the orphaned children, it is the love and care are that we need to provide for them." 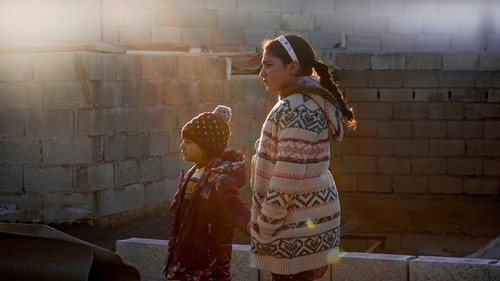 The story of each child from the movie is striking. You will discover so many painful stories about orphans in the film. Begic says that the humanitarian Beşir Foundation organized a program of workshops throughout the whole year for hundreds of Syrian orphans. According to Begic, "This experience changed the lives of the children but also my life and the life of my crew." Begic says that watching those kids' smiling faces was priceless. After the experience in Turkey, she says that she would like to do it more frequently as a humanitarian job.

Begic gave information about some of the children who played in the movie, including a two-month old baby whose parents were killed and was eventually brought to Turkey with other relatives. Ten-year-old Ahmed still hopes for his father to come back. "They are all living in the limbo of the hope of going back to a Syria they hardly remember," she said.

Begic said that one of the characters, İsa, was wounded by the same bomb that killed his father in Aleppo. He barely survived. His life was saved in Turkey where he still lives with his four brothers and one sister. "In this process, I met many children wounded in the war and later saved thanks to Turkish doctors. I would like to use this opportunity to thank them," she said.

In Begic's new movie, love and hope are the dominant feelings expressed. Begic discussed a very sensitive subject in her movie and the main characters are Syrian kids who lost their parents as well as Turkish parents who lost their children, as well as those whose children left them alone searching for a better life somewhere far away from home. She tells that sadness and loss connects them all but that there is always hope. "Even if someone's situation seems sad and hopeless, there is always a way out. In those times of depression, I believe that the way out is in simple human relations, heart to heart communication. This is where the movie becomes optimistic and full of hope. I believe in good in people. I believe that it's possible to reach happiness," she says.

Ahmed Hasrum, Mutez Tuka Carole Abboud, Firas Taybeh, Nisreen Faour, Darina Al Joundi, Siham Haddad, Mehmet Usta, Yıldız Feyyaz Duman, Beyazıt Gulercan and Ferda Isıl also took part in the movie. The crew coming from thirteen different countries made the movie more borderless: "Even though it's about orphans, this movie is about beauty of human beings settled in Şanlıurfa - one of the most beautiful and sacred places on earth. I was directing a film where people speak two languages and we all functioned as one organism. This process brought me back hope in humanity and the belief that we are able to break the walls between us, just if we want to."

Begic reveals that she had a feeling that she wasn't doing enough to help other people: "I was thinking that if every person would take care of one orphan in his or her neighborhood, this world would be a much better place. I believe art is there to help us remember. I've learned that the language of cinema transcends human language and art can change the world by changing its microcosms. "

The director attracts attention to Western world who don't take concrete steps about migrant crises and war but deliver speeches about peace all the time: "Unfortunately, I must say that pain of "others" was never touching the hearts of Western politics. This I've learned the hard way with our war in Bosnia. The "international community" silently watched the killing of thousands of innocent people and children in my country. Justice did not come to us until this day. We learned that the death of one person with a "proper identity" can be valued as more important than the death of thousands of 'others,' which is the unfortunate and racist legacy of colonialism," she said.

Racism against Muslims under the name Islamophobia or anti-Muslim movements increase in Western world. Begic says that in the last decades, there is a serious and very evil campaign against Muslims and Middle East events. She says that movement affects our lives and her life as a Muslim woman: "Probably, it will affect the lives of our children. But in the western world, as much as in other places there are people who are fighting against stereotype and injustice and that brings back hope."

Aida Begic says even if some problems seem hopeless, we cannot wait for some organizations or someone above us to change things. "We have to start making changes in our own house, our own neighborhood. I hope love and understanding will save us, otherwise we will destroy our future while chasing material things and achieving our own interests alone. We as Muslims know that our only possession is what we give to someone," she said.

'Turkey must be appreciated'

Begic appreciates Turkey's efforts in facing the refugee crisis. She accentuates that this process is not easy for Turkey and Syrian migrants: "Turkey did an amazing thing by accepting about 3 million Syrian people and saving their lives that way. Of course, it's not easy to handle all those people and provide them everything they need in such a short time. It's not easy for those who escaped their homes, also for those who are supposed to welcome them in their home. It is a complex situation that cannot be solved just in a few years. But what's priceless is the fact that those people who came to Turkey survived thanks to the aid provided. Compared to other neighboring countries, Syrians receive far better treatment in Turkey."

New movie on the way

Aida Begic has one very interesting poetic movie in development. It's called "A Ballad" and is based on one famous Bosnian oral poem. It is about love and the position of women in present Bosnia and Herzegovina.