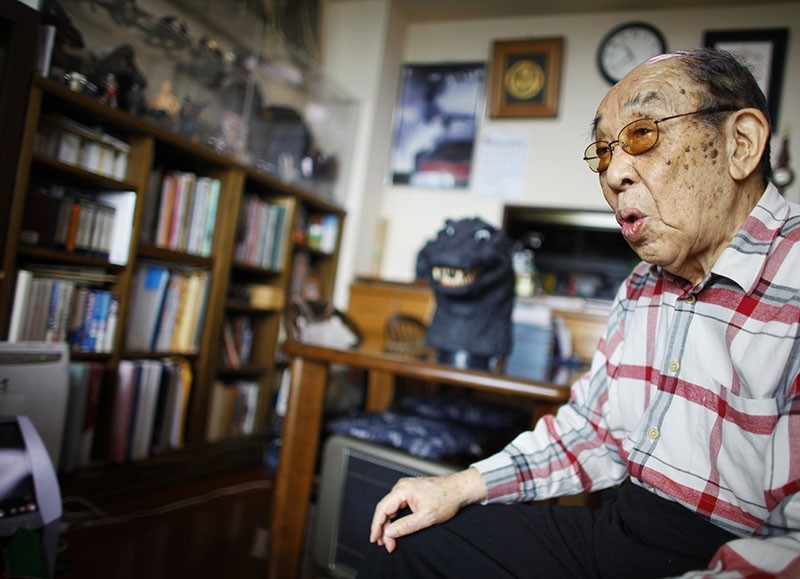 In this April 28, 2014 photo, original Godzilla suit actor Haruo Nakajima, who has played his role as the monster, speaks during an interview at his home in Sagamihara, near Tokyo. (AP Photo)
by Associated Press Aug 08, 2017 12:00 am

Haruo Nakajima, the actor who stomped in a rubber suit to portray the original 1954 Godzilla, helping to make the Japanese monster an iconic symbol of the nuclear era, has died. He was 88.

Nakajima's daughter Sonoe Nakajima told The Associated Press on Tuesday that he had been hospitalized last month and died of pneumonia Monday.

Haruo Nakajima was a stunt actor in samurai films when he was approached to take the role of Godzilla, which may be Japan's most successful cultural export. Some fans prefer Nakajima's version over some Hollywood depictions which they say make the fire-breathing lizard an evil-looking animal.

The first suit weighed 100 kg (220 lb) and was so hard to breathe in that an oxygen tube was attached, Nakajima reminisced in later years. He played the monster in a dozen films in total, running through to 1972.

Vivacious and energetic in a 2014 interview with The Associated Press, Nakajima said he invented the character from scratch, and developed it by going to a zoo to study how elephants and bears moved. He said it was important to show the pathos of the creature, which could only smash everything in its way.

"If Godzilla can't walk properly, it's nothing but a freak show," he said at his suburban Tokyo apartment, proudly sitting among sepia-toned photos of him as a young man and Godzilla figures.

He recalled that the rubber suit he wore was so hot, especially under the glaring lights of the movie set, that the sweat he wrung from his shirt would fill half a bucket.

In the original movie, directed by Ishiro Honda with an unforgettable score by Akira Ifukube, Godzilla surfaces from the Pacific Ocean suddenly, a mutation as a result of nuclear testing in the area.

The Toho classic, which went on to become a mega-series and inspired Hollywood spinoffs, struck a chord with postwar Japan, the only nation in the world to suffer atomic bombing, in Hiroshima and Nagasaki in the closing days of World War II.

Nakajima said the theme of his Godzilla was grand and complex, addressing universal human problems, as it spoke to a Japan that still remembered wartime suffering.

"It's not some cowboy movie," he said.

Although recent Godzilla films use computer graphics, the latest Japanese Godzilla remake, released last year, went back to using a human actor, Mansai Nomura, a specialist in the traditional theater of Kyogen. His movements were duplicated on the screen through "motion capture" technology.

Until recently, Nakajima had continued to be a star guest at festivals and events. He had been scheduled to be featured at the Tokyo International Film Festival in October.

A funeral is to be held for family and close friends.