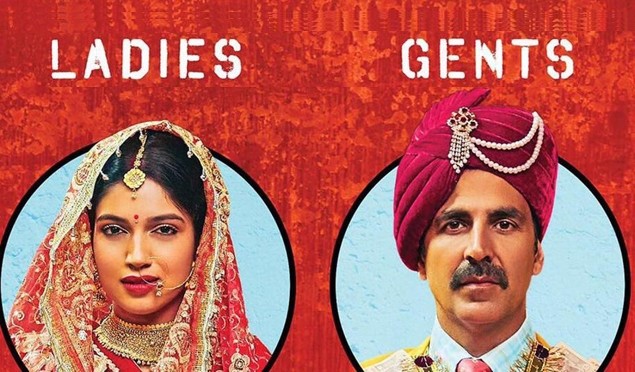 Bollywood may be famous for its blingy song and dance numbers, but a new movie released Friday deals with a distinctly less glamorous subject - India's chronic lack of toilets.

Prime Minister Narendra Modi has made building more toilets a key priority in the country of 1.25 billion people, around half of whom still have to go into the fields to answer the call of nature.

Campaigners estimate that nearly 200,000 infants die every year due to infections spread through open defecation, which they say also puts women at risk of sexual assault.

"Toilet: Ek Prem Katha" ("Toilet: A love story") is inspired by the true-life tale of one man's battle to build toilets in his village in rural India.

He wanted to win back his new wife, whose refusal to live in a house without a toilet won her plaudits in India.

Script writers Siddharth Singh and Garima Wahal told AFP they hoped the movie, featuring one of Bollywood's biggest stars Akshay Kumar, would have a "tangible impact" on Indian society.

"This happened in a village in Madhya Pradesh, and we thought that was a strong statement," said Singh, referring to one of India's most rural states.

The writers said they came across numerous stories of women being assaulted when they went into the fields late at night in the process of researching the movie.

"But defecating in the open is not only unhealthy it is also dangerous," said Garima.

"While we were doing our research we heard of three incidents of molestation. Crimes against women have increased owing to their vulnerability when they are out in the fields, alone in the dark, with their 'pants down' as it were."

Garima said it was hypocritical for Indian society to insist that women cover up on the one hand, while on the other forcing them to "expose themselves owing to a lack of sanitary and bathroom facilities."

Kumar, one of the world's highest paid actors with an income of $31.5 million according to a Forbes ranking published last year, recently released a "Toilet Anthem" to promote the cause.

"While mankind has progressed far enough to journey to Mars and scale Mount Everest, 54 percent of India defecates in the open," says the song.

Modi has called for every household in India to have a toilet.

Last year, he announced that his government had already built more than 20 million toilets since coming to power in 2014.

Around two-thirds of homes in the village that the movie is based on now have toilets, according to media reports.

"Our script was ready in 2014 and we felt we should get it going while it is still a hot topic. It's especially important to get people in rural areas to watch this film," said Garima.