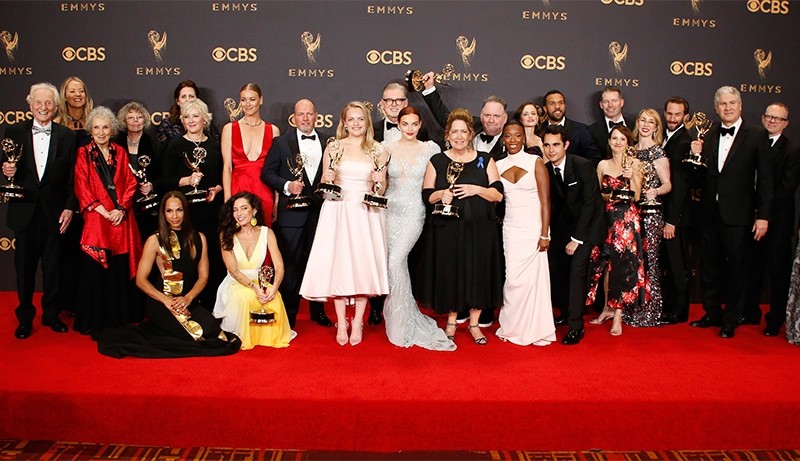 "Go home, get to work, we have a lot of things to fight for," producer Bruce Miller said in accepting the best drama trophy for "A Handmaid's Tale," which also won best drama writing and directing awards and a best actress trophy for Elisabeth Moss. A beaming Margaret Atwood, the Canadian author whose 1985 novel is the show's source, was onstage.

Sterling K. Brown, whose role in "This Is Us" earned him the top drama series actor trophy, paid tribute to the last African-American man to win in the category, Andre Braugher in 1998 for his role as a police detective in "Homicide: Life on the Street."

"Nineteen years ago, Detective Frank Pemberton held this joint," Brown, hoisting his Emmy and calling it his "supreme honor" to follow Braugher. He was good-natured as the orchestra cut into his speech, but it seemed a glaring misstep on a night in which the TV academy reveled in signs of the industry's increasing diversity.

Earlier, Nicole Kidman spoke uninterrupted for 2 minutes and 45 seconds, while Brown got 1 minute, 58 seconds, before he was played off, a significant difference given the short time winners get to say their piece.

Moss captured her first Emmy and thanked her mother in a speech that was peppered with expletives, while Ann Dowd won supporting actress honors for "A Handmaid's Tale."

Donald Glover won the best comedy actor for "Atlanta," which he created and which carries his distinctive voice, while Julia Louis-Dreyfus was honored for a sixth time for her role as a self-absorbed politician in "Veep," named best comedy for the third time.

"I want to thank Trump for making black people No. 1 on the most oppressed list. He's the reason I'm probably up here," Glover said, acknowledging the entertainment industry's and the Emmys' increased tilt toward the nonstop political under Trump. He also won a directing trophy for his FX Networks show.

Combined with Emmys that Louis-Dreyfus has won for "Seinfeld" and "New Adventures of Old Christine," her latest trophy tied her with Cloris Leachman as the most-winning Emmy performer ever. She called "Veep" an "adventure of utter joy," but first made a sharp-edged joke about the show's direction next season, its last.

"We did have a whole story line about an impeachment, but we abandoned that because we worried that someone else might get to it first," Louis-Dreyfus said.

Host Stephen Colbert's song-and-dance opening — with help from Chance the Rapper — included the song "Everything Is Better on TV," which, among other Trump digs, mentioned his alleged ties to Russia and included the lyric "even treason is better on TV."

The ceremony was also smartly free-wheeling under Colbert's sure hand, including a taped bit in which the nude comedian — carefully shown seated and from the back — was being "reprogrammed" by "Westworld" star and nominee Jeffrey Wright to correct a glitch in the host mechanism.

"Saturday Night Live" triumphed for a season of skewering Trump.

"I remember the first time we won this award," creator Lorne Michaels said in accepting the show's trophy for best variety sketch series. "It was after our first season in 1976. And I remember thinking ... there would never be another season as crazy, as unpredictable, as frightening, as exhausting, or as exhilarating. Turns out I was wrong."

The trophies for best supporting comedy acting went to Kate McKinnon, who played Hillary Clinton on "SNL," and Alec Baldwin for his Trump portrayal on the NBC show.

McKinnon thanked Clinton for her "grace and grit." Baldwin spoke directly to Trump, who has complained in the past that he was cheated out of a trophy for hosting "Celebrity Apprentice": "I suppose I should say, 'At long last, Mr. President, here is your Emmy.'"

Melissa McCarthy was honored at last weekend's creative arts Emmys as best guest actress for her "SNL" work, including portraying Sean Spicer. The former White House press secretary made a surprise Emmys appearance, wheeling in his own podium.

"This will be the largest audience to witness an Emmys, period. Both in person and around the world," Spicer shouted with authority, echoing his claim that Trump's inauguration crowd was the biggest ever and evoking McCarthy's manic portrayal of him.

John Lithgow, who received the best supporting drama actor for his role as British leader Winston Churchill in "The Crown," took a more diplomatic approach to political commentary.

"Most of all I have to thank Winston Churchill. In these crazy times, his life, even as an old man, reminds us what courage and leadership in government really looks like," Lithgow said.

Many celebrities wore blue ribbons to support the American Civil Liberties Union, which is seeking to shed light on the plight of young immigrants facing the potential of being deported.

HBO claimed a leading 29 awards based on the combined totals from Sunday and last week's creative arts awards, followed by Netflix with 20, NBC with 15, Hulu with 10, ABC with seven and FX Networks with six.

NBC's uplifting family drama "This Is Us" missed its shot at being the first network drama to win since Fox's "24" in 2006, but the network's "SNL" won a leading nine awards among programs.

"More great roles for women, please," said Kidman as she and her fellow executive producer and co-star Reese Witherspoon accepted the miniseries' award.

Riz Ahmed was honored as best limited series actor for "The Night Of."

Lena Waithe became the first African-American woman to win an Emmy for comedy series writing, for "Master of None," sharing the award with series co-creator Aziz Ansari, who is of Indian heritage.

"The things that make us different, those are superpowers," Waithe said. "Thank you for embracing a little Indian boy from South Carolina and a little queer black girl from the south side of Chicago," she said, basking in a standing ovation from the theater audience.

TV academy President and CEO Hayma Washington paid tribute to TV's increasing diversity. That was reflected in the record number of African-American continuing series acting nominees, but Latinos were overlooked and Ansari was the only Asian-American contender.

"The Voice" won the reality competition category. "Last Week Tonight with John Oliver" won the award for best variety talk series writing and then the variety show prize itself, prompting also-rans Colbert and Jimmy Kimmel to jokingly raise a glass to each other and speculate whether the wrong name was announced.

The "In Memorian" segment had several notable exclusions, including Dick Gregory and Harry Dean Stanton.