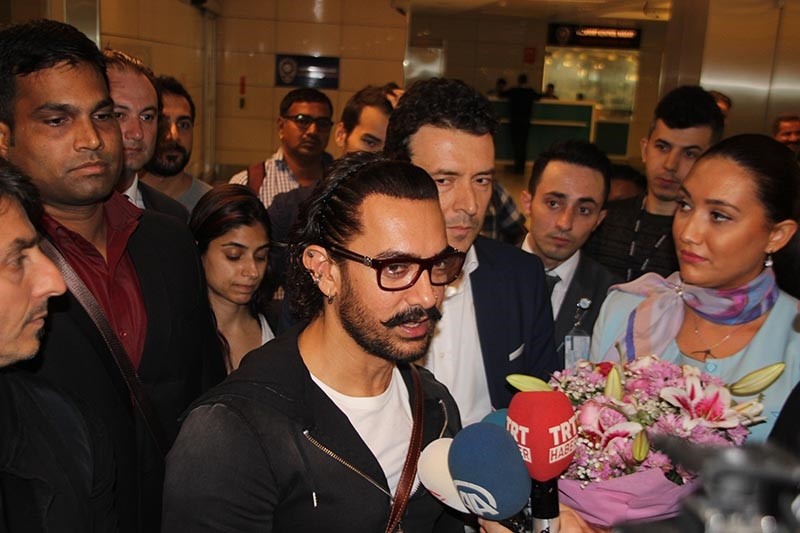 Popular Bollywood actor Aamir Khan arrived in Istanbul Wednesday based on an invitation from Turkey's Culture and Tourism Ministry and to promote his latest film Secret Superstar, which will be released in screens across the world Oct. 20.

"I am so happy to be over here. For many years I have wanted to come to your beautiful country and finally I am coming here so I am very happy," the Bollywood star told reporters at Istanbul's Atatürk Airport.

"For many years my fans have been inviting me and I have been trying to come, finally the time has come and I am very thrilled, really, looking forward to my trip here in Turkey," the 52-year-old actor said.

"I want to tell my fans I am very happy to be here," he added.

Khan's fans flocked to Atatürk Airport to see the popular actor. Some fans were seen screaming and crying.

"It really touched me to see such an emotional welcome here" Khan told reporters and added that he will do his best to spend more time with his fans.

Khan said that he was looking forward to feedback on his latest film from the Turkish audience.

Turkey's Culture Ministry said that Khan had been invited to the country. He will be in Istanbul and the capital Ankara between Oct. 4 and 7, the ministry said in a statement Wednesday.

Secret Superstar, which tells the story of a young girl who wants to be a singer, was directed by Advait Chandan, and casts Khan, Zaira Wasim, Raj Arjun and Manuj Sharma, the statement said.

The actor's 2016 hit Dangal, a biographical sports drama, was released Aug. 18 in Turkey.