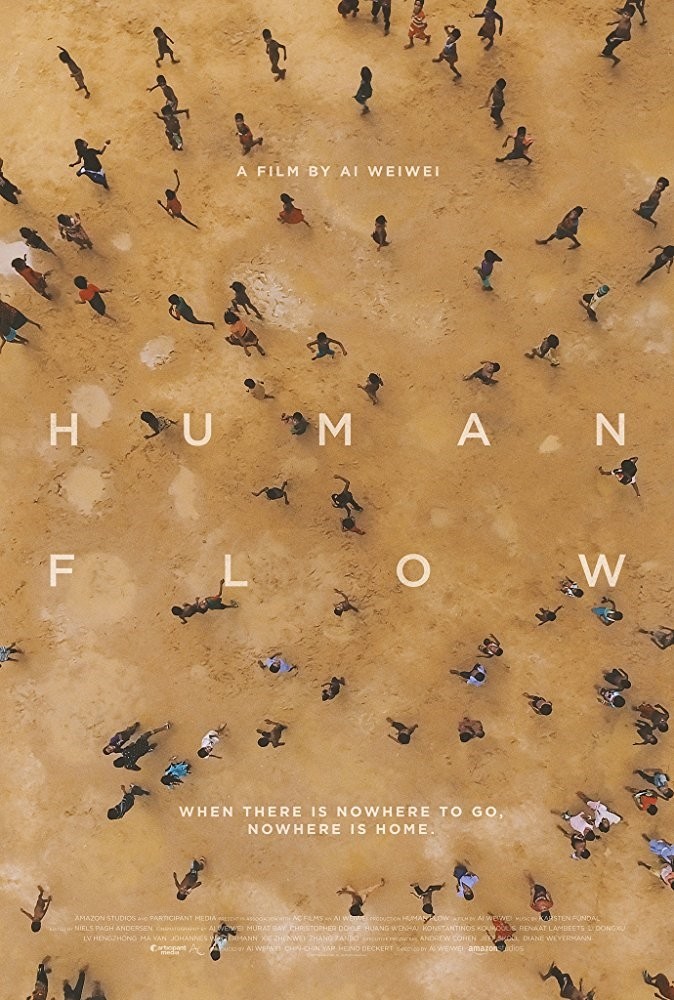 In the tender moments of "Human Flow," Ai Weiwei's epic documentary on the worldwide migrant crisis, he hugs, cooks with and cuts the hair of refugees.

An ordinary filmmaker might be accused of getting too close to his subject but, as far as the Chinese dissident and internationally renowned artist is concerned, he is the subject.

"When I look at people being pushed away from their homes because of war, because of all kinds of problems, because of environmental problems, famine, I don't just have sympathy for them," he told Agence France-Presse (AFP).

"I do feel that they are part of me and I am part of them, even with very different social statuses."

Ai, 60, opened up about his own displacement as a child in a recent interview with AFP, donning his trademark beard cut short, and his blue and white sneakers color-coordinated to match his casual shirt and loose-fitting slacks.

The venue, a plush office in Beverly Hills, could have been a million miles away from the labor camps where he grew up, a refugee in his own country as the son of dissident poet Ai Qing.

Shortly after Ai's birth, the People's Republic of China was founded, and Ai senior found himself at odds with the authorities, accused of being a "rightist" during Mao's anti-intellectual cultural revolution.

The family was exiled for 20 years, first near the Russian border and then in the northwestern province of Xinjiang, where his father was forced into hard labor, including cleaning communal toilets.

"He was doing that for years, and our family was beaten and insulted, seen as the most dangerous species threatening the revolution," Ai remembers.

The family was allowed to return to Beijing after Mao's death in 1976, and Ai moved to the United States for 12 years.

After coming of age as an artist in early 1990s New York, he returned to Beijing. As his global reputation grew, he was watched relentlessly by the authorities, beaten by police and put under house arrest.

After being thrown in jail without credible charges for 81 days in 2011, he had his passport confiscated for four years.

Now a refugee in his own right in his new home in Berlin, the father of one young son only feels comfortable returning to China alone.

"Human Flow," his powerful expression of solidarity with refugees around the world, demonstrates the staggering scale of the refugee crisis and its profoundly personal human impact.

Captured over the course of a year in 23 countries, it follows a chain of human stories that stretches from Bangladesh and Afghanistan to Europe, Kenya and the U.S.-Mexico border.

Ai traveled from teeming refugee camps to barbed-wire borders, witnessing refugees' desperation and disillusionment, as well as hope and courage.

"I'm so far away from their culture, religion or whatever their background may be. But with a human being, you look at him, you know what kind of person he is," says Ai.

"I have this natural understanding about human beings. So I try to grab them with this kind of approach, a very intimate approach. They can touch me, cut my hair. I can cut their hair. I can cook in their camp."

"Human Flow" is far from Ai's first work on the refugee crisis. Just last week, he scattered over 300 outdoor works across New York as part of a new illustration of his empathy for refugees worldwide.

Ai dismissed criticism that his work has little artistic merit and that he is more of a campaigner, telling AFP, "A good artist should be an activist, and a good activist should have the quality of an artist."

"Human Flow," which premiered at Venice Film Festival last month and opens in Los Angeles on Oct. 20. "I believe anybody sitting in the theater would come out with their own judgment," he said.