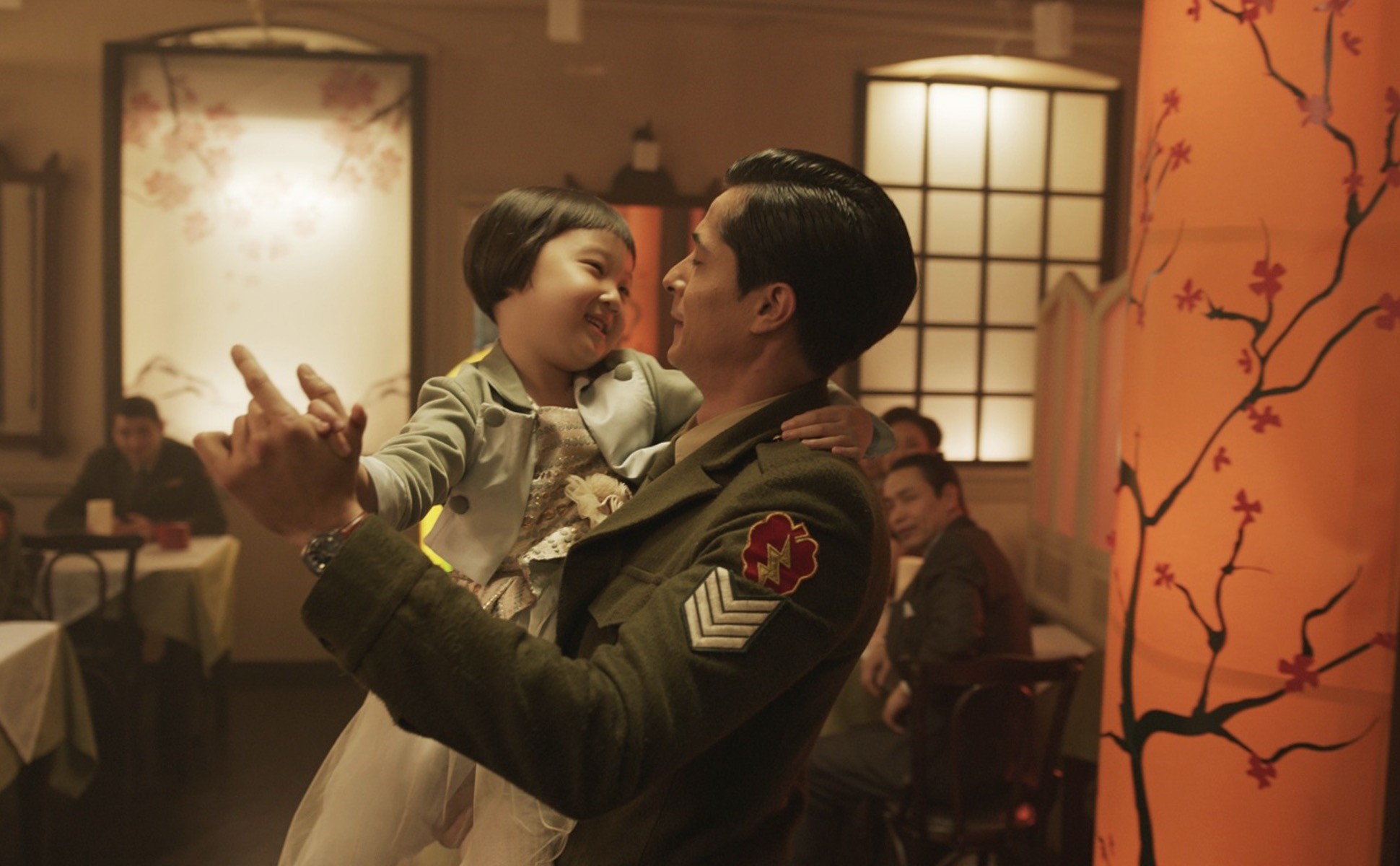 The U.S. premiere of Turkey's Oscar hopeful ‘Ayla' becomes a victim of the diplomatic quibbles of U.S. authorities after visa suspension causes one of the two people whose story during the Korean War is portrayed on film to be rejected admission and reunion with his ‘Ayla'

The U.S. premier of Turkey's entrée to this year's Academy Awards for Best Foreign Language Film was ruined by U.S. authorities' failure to take appropriate actions to allow the star of the show to enter the country. The movie's screening at the opening night of the Hollywood Turkish Film Festival at Paramount Studios in Los Angeles on Saturday, "Ayla," that depicts the unlikely but real-life friendship between a Turkish sergeant and a Korean girl during the Korean War in the early 1950s, was supposed to feature a reunion of the actual Ayla (Kim un Cu), who is in her early 70s, and the Turkish soldier, Süleyman Dilbirliği (93). While Kim was there, Dilbirliği was nowhere to be seen, the latest casualty of former U.S. Ambassador to Turkey John Bass's diplomatic whim to suspend the visa process in Turkey. 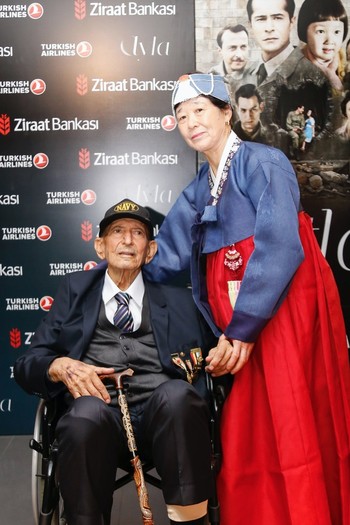 In response, Turkey has also suspended its visa process for U.S. citizens as part of the country's diplomatic right of reciprocity. However, Foreign Minister Mevlüt Çavuşoğlu this weekend implemented measures to ensure the several U.S. stars invited to the prestigious Antalya Film Festival currently taking place will be allowed entry to the country, demonstrating Turkey's desire not to sacrifice cultural and social interaction between the two countries to diplomatic differences.

The reunion was supposed to be the highlight of the three-day festival in Los Angeles and a perfect introduction for the movie to American audiences. The film focuses on a heart-wrenching true story that took place during the Korean War, inspired by Turkish Sgt. Süleyman Dilbirliği, who fought in Korea in the 1950s, and the 6-year-old Korean girl whose parents were killed in the war.

Still, the real-life Ayla attended the screening of the movie. Upon being told that the duo would not be meeting this time around due to the recent controversial visa restrictions, the audience was obviously moved. Kim was devastated by the absence of Dilbirliği, who she refers to as "father" and is the true hero of the story. When Ayla entered the movie theater, most of the audience shared her sorrow and could not hide their tears. While many were there to watch a film, as soon as Ayla appeared, everyone knew they were witnesses to more than just a cinematic experience and grieved for the missed opportunity of a father to unite with his much loved daughter and vice-versa.

Daily Sabah Editor-in-Chief Serdar Karagöz, who attended the premier, said it was disappointing to see how Turkish-American cooperation that began in Korea and resulted in the freeing of South Korea could deteriorate so far. "The U.S. is constantly harming its standing in the eyes of the Turkish public. Its refusal to cooperate on FETÖ [Gülenist Terror Group ] and the PKK, followed by the latest scandal of suspending the visa process, are poisoning ties. I hope members of the U.S. administration watch this movie and realize how important cooperation between the two countries is for world peace."

He also said the main prerequisite for mending bilateral ties was for the U.S. administration to finally understand how serious Turkey is on PKK terrorism and FETÖ, which is responsible for last year's deadly coup attempt. "Unless the U.S. understands these red lines, we will keep facing such unfortunate instances that will further fray ties."

The producer of the film, Mustafa Uslu, expressed his feelings after the screening, saying: "People applauded Ayla at the screening and Ayla arrived at the festival in tears. Unfortunately, veteran Sgt. Dilbirliği could not come to the U.S. and we are very sad about this. I hope that the suffering of the two countries' peoples, caused by the visa crisis, will end very soon. People should not bear the burden of this enforcement."

"Ayla," the story of a young, newly orphaned child who is alone in a very remote place, is able to unite Turks, South Koreans and Americans. The film depicts how love has the potential to bring people together despite differences in language, religion, race and the destructive ravages of war.

When Sgt. Dilbirliği finds the little girl in the woods, he brings her to the camp where he looks after her for 14 months. Sixty years later, he tracked her down and they were finally reunited in Istanbul in 2010. However, on the momentous occasion of the film's screening, the two could not meet.

When the first Turkish troops landed in Korea in 1950, Sgt. Dilbirliği was glad to hear from the American commander that the war was about to come to an end right after a few hundred Korean soldiers were removed from the region, and he could return home.

However, on the night of Nov. 26, they were ambushed as 350,000 Chinese soldiers crossed the border in the region of Kunuri, where Dilbirliği's troops fought back. The U.N. forces retreated, followed by Turkish forces.The troops passed through villages and came across a half-naked girl in a forest, who was about to freeze to death after her parents were killed in the war. Dilbirliği took the 5-year-old girl back to their camp and took care of her, feeding and clothing her. The sergeant thought that her face shone like the moon, so he named her "Ayla," which in Turkish means "Nimbus."

Ayla soon became the mascot of the troops and Dilbirliği cared for Ayla for the remainder of his time in Korea (14 months), taking photos of her and teaching her Turkish. When the troops were allowed to return home at the end of the war, she was entrusted to other troops there. Sgt. Dilbirliği, who left a piece of his heart in Korea, never forgot little Ayla.

As part of events to commemorate the 60th anniversary of the Korean War, Dilbirliği attended a reception at the Korean Consulate in Istanbul. There, he could not resist sharing a photo of himself taken with Ayla, and told his story. He wondered if Ayla, the Kim un Cu he had rescued, was still alive. South Korean consular authorities immediately began a search and learned that she had been sent to the Ankara School where children saved by Turkish troops were relocated after the war. She had gotten married, but lost her husband at an early age. Later, when her daughter-in-law left the house, she began working as a cleaner in a nursery at the age of 65 to look after her two grandchildren from her only son.

The Korean authorities united Ayla and Sgt. Dilbirliği in Korea in August 2010, and everyone who witnessed the reunion burst into tears. Ayla and Dilbirliği hugged each other and cried, having finally been reunited after 60 years. All the retired sergeant could say was: "It is over girl. I'm here."

They frequently wrote to each other over the years and Ayla referred to Dilbirliği as her father, and his wife as her mother, in her letters.

Foreign Minister Mevlüt Çavuşoğlu has stepped in to resolve the visa problem of Hollywood stars, who are expected to attend the 54th Antalya International Film Festival.

The Foreign Ministry announced that Çavuşoğlu negotiated with American officials for actor Christopher Walken and actress Juliette Lewis, who are invited to the opening ceremony of the event, in addition to Matt Dillon and Lindsay Lohan, who will attend the closing gala ceremony.

In the aftermath of the negotiations, the Hollywood artists were informed that precautions were already taken on the issue and they would not face any problems entering Turkey.