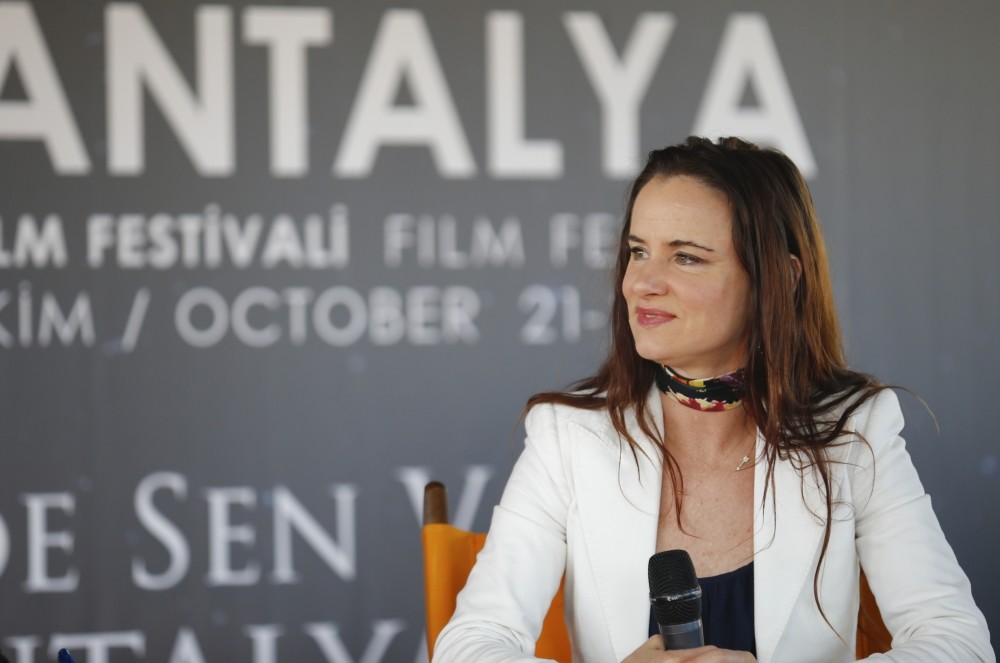 Famous actress Juliette Lewis gave an interview on the second day of the 54th International Antalya Film Festival, the first and now most rooted film festival in Turkey.

The 54th International Antalya Film Festival continues to bring Turkish and international films together through its mission of presenting a communicational and cultural platform. The festival features many events that unite gastronomy and cinema with film screenings and workshops.

An interview with Juliette Lewis was one of Sunday's events. Bestowed with the Key to the Cinema City during the opening ceremony of the festival, the iconic actress took time to answer an array of questions about her interesting career.

Through its mission to bring together cinematic writers and famous figures in interviews, the 54th International Antalya Film Festival had screenwriter Daniel Wise as the interview's moderator.

Wise started off by focusing on the actress's early years. He initially asked about Martin Scorsese's "Cape Fear," the film that made Lewis famous, and also about her iconic scene with Robert De Niro in the film. Lewis was 18 when she took the role, explaining: "I played a girl of 14 in the film. Everybody thought that Martin Scorsese discovered me. However, it was actually me who applied for the role. After four interviews, I managed to persuade him. I like to get inspiration from my environment, and I was inspired by a girl that I saw at a park for this role. She was stroking a cat and she seemed like she was keeping a secret. I was also really natural during the shooting. My nature and my role were really coherent." After she spoke generally about "Cape Fear," she also mentioned her interactions with Robert De Niro. Expressing her appreciation for the opportunity to work with the famous actor, she said the scene was like an emotional dance. Explaining that it was a rather long scene for a film, she said: "Robert De Niro was very present in the film, and he also made me present with him."

Wise also asked about her acting aspirations after talking about her other films, including "Natural Born Killers" and "August: Osage County." She said she has no limitations and has dealt with dancing, singing, acting and storytelling throughout her career. She said: "My father is also an actor. Therefore, being an actress was always a choice for me. I was dealing with many things, and my father encouraged me. Even if he wasn't a man of advice, he always directed us to what we love. I was really sensitive to the pain of other people and also curious about their experiences. Acting became a way for me to express this curiosity and sensitivity."

Explaining her early roles were mostly comedic, the actress added that she likes variety, and her roles were always a surprise for her and everyone else. "I could take a role in a comedy, then go on to participate in a drama, too. I like both humor and deep dark feelings. When I look back, I can see that my roles were different every time. I have never seen myself as a perfect actress. I have always tried to do better," she said.

She said her role in "The Other Sister" in which she played a mentally challenged girl was very special for her. The actress also said she is now giving herself time to decide what she wants to do in the future. Refusing to be controlled by the system, she said her real passion is music, a passion that led her to start a band at the age of 30.

Lewis, who has continued her career as a singer and actress, also answered open questions from the audience during the 45-minute interview. After receiving almost as many compliments as questions, Lewis expressed her thanks to the people who came to share the moment with her.