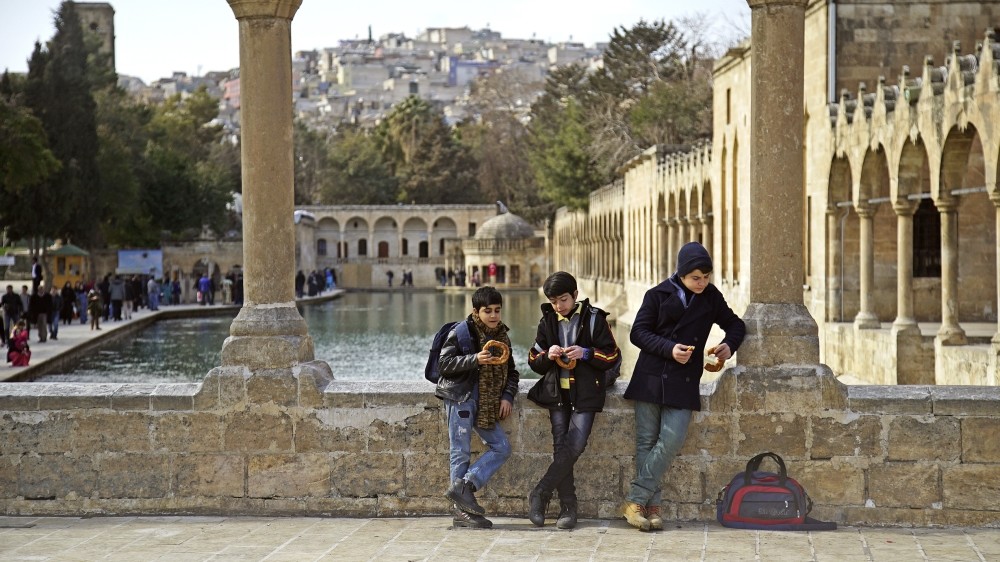 The 54th Antalya International Film Festival opened with the screening of Bosnian director Aida Begic's film ‘Never Leave Me,' which focuses on the lives, memories and daily experiences of Syrian women and children who live in the southeastern Turkish province of Şanlıurfa

The 54th Antalya International Film Festival opened on Saturday with an honorary award ceremony and the screening of Bosnian director Aida Begic's "Never Leave Me" film, which focuses on the lives of Syrian women and children as refugees.

The film, shot in Turkey, was so touching that many audience members burst into tears. The authenticity of the film was augmented by the fact that the cast consisted of real refugees, giving the film a truly authentic and realistic feel.

The director chose to portray the daily lives and struggles of Syrian refugees in a narrative voice unmarred by propaganda or agitation, truthfully depicting authentic moments of pain and joy. It is also, however, quite far away from the traditional style of documentary filmmaking because she fictionalized stories in order to protect the children's privacy. 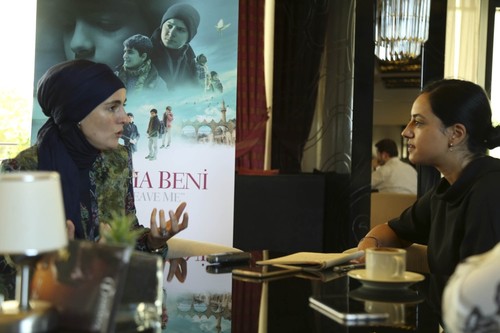 The film serves good faith in terms of bringing forth the humanitarian dimension of the Syrian crisis in this modern era where everyone is too busy, pessimistic or shy to touch this reality that lives among us. Daily Sabah conducted an interview with Aida Begic to learn more about the film, the Syrian humanitarian crisis and Bosnia.

DAILY SABAH: How did you come up with the idea to shoot a film about refugee children in Turkey's Şanlıurfa province?

AIDA BEGIC: Basically the whole thing was initiated by the Beşir Association, which wanted to do something with the issue of orphans. The idea first came up at the workshops for refugees in order to bring some joy and fun into the Syrian kids' lives. It was one where we had acting workshops, playing with them. Parallel with that, the organization was providing them with humanitarian facilities and needs in Şanlıurfa.

In my experience, people can be attached with human stories through different forms, and fiction cinema is something I do best. I think that sometimes, people can relate to fictionalized stories rather than pure documents. So, we thought it would be nice to present this issue which affects children, telling their story from a child's perspective in a fictional manner. We hoped that this would be the beginning of raising awareness about these issues.

More importantly, we wanted to present children as true human beings. Their dreams, their likes, their dislikes, and who they are. There are people in need on streets everywhere in the world, but we are rarely given the chance to truly understand who these people are in our time-limited, busy lives.

However, I really believe that people would like to help. For instance, in Turkey people are very emotional and they have empathy. But we feel that we do not have the opportunity or time. Through this kind of project, I think that we can bridge the gap between people. In comparing the Bosnian and Syrian tragedies, what I have learned is that every tragedy is the same, and every pain is the same. People feel the same way when they experience pain, regardless of their nationality, their language, religion or race. And, we can change a lot of things however it looks pessimistic in this time around the world. We can think about microcosmic areas as changing a small environment can change a much wider one. 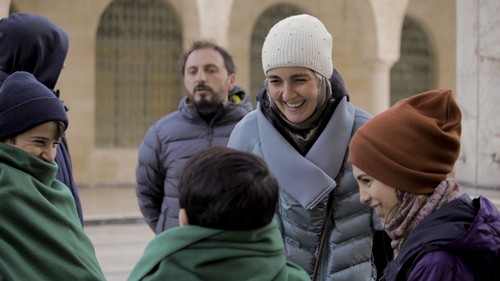 D.S.: Was it your aim to shake people up about the reality of Syrian refugees or did you just want to present a picture of their lives?

A.B: I just wanted to portray a picture of it. I did not want to influence any with my own agenda. I did not want to tell the truth about the history of the political circumstances in Syria and refugees. I just wanted to present a depiction of my personal experience. I have slept in these orphanages. I have spent a lot of time with the orphans and I find a lot of joy, sadness and beauty in their stories. I thought if I were to present this thing that I fell in love with, people would automatically respond to that.

D.S.: Do the children play their own authentic stories in the film?

A.B.: They play their own characters but the story is just inspired by their stories. It is fictionalized because I needed to protect their privacy. So I built the story on their general experiences and fictionalized the story. I had to create some distance between their real lives and what they are acting.

D.S: How did you handle the responsibility of communicating with the kids who speak a foreign language?

A.B: I always believed that words are just a small part of the communication between people. There is always something unspeakable between us in how we like or do not like each other, for instance. There is more than we say. As a director, I know the subtext, the micro mimics; the subtext is something we remember more from films than what the actors say. Since the children speak Arabic and I speak Bosnian and English, we had a translator, for sure. At first, I thought that the translations were going to be complicated but by the end of the day, we had begun to communicate through emotions. After less than two weeks, the children were able to directly understand my clues about acting and this understanding went beyond language. I do not recall there being any barriers between me and the kids. The heart-to-heart connection between people is always more important than the words we say.

A.B: These kids went through so much. They have survived something that regular people in most countries will never face. So, they are like old people in the bodies of children. They are so smart and strong that they understand life better than adults do. To work with them is very amazing as, unlike adults, they are not motivated by greed or selfishness; they also give. This is a two-way process. If you give them love, they love you back.

One of the successes of this project was that during the process of filming, some shy and depressed children changed in the process. They found hope. They started to have self-confidence. One of my youngest actors even started to refuse some costumes. It means that she has an attitude. Unfortunately, when we give somebody something, we expect them to be pleased and content with what we provide. "You cannot complain, you are in need," we tend to think. However, these children all have their own tastes, their own character and personal will. Some of the children became very picky and that is their right. It is normal and healthy that they have become picky.

We should not humiliate people through helping. It is enough that they are left without choices; they had to leave their homes in Syria, they had to flee from danger. This experience is humiliating enough for them. Especially when speaking about children, we have to be very careful as they are the future of this country, their own country and the entire world.

D.S.: So, you think that a small difference can make a much bigger change?

Exactly. We generally think "What can I do?" in the face of humanitarian crises. This paralyzes us as it is clear that a 10 year-old cannot change the world. That would be too idealistic. However, there is an important point to be made here: The orphans do not need us; rather, we need them. They give our lives purpose. In our project, the small things you do are rewarded, and this much bigger than any other reward I have ever received in my entire life.

D.S.: How would you describe the experience of conducting a film project of such emotional intensity?

It was very difficult. There were times that I burst into tears. I never laughed so much while being so devastated inside when I slept at that orphanage. Formally it was great. We had fun times, we played games and we drank coffee with Syrian women and, at the same time, I felt so sad inside. That is this kind of paradox you feel while watching the movie. This is life, though. Seeing a child with such sad eyes can cut your heart to pieces. I think that was the hardest part of making this film.

D.S: Do you think your own experience with the Bosnian War back in the 1990s has enabled you to more easily understand and sympathize with Syrian refugees?

Of course. When the war in Bosnia broke out, I was only 16 years old. I was a kid. We used to consider the people of the international community, for example the helpers, as terrible people. I questioned myself like am I like those terrible people? But, no, because it was very personal motivation. I was not trying to make a carrier out of their misery as I really know how they feel. There were children who just came from Deir ez-Zor. You could smell war on them. When I told them my hometown was also under siege for four years, they were surprised and they sympathized with me.

When you are in trouble, you think nobody else in the world is suffering. However, then you find someone who has experienced something similar, and share your pain. This makes you feel better and teaches us that we are not alone. So the mechanism happens during every war. However much we try to change the concept of the world, whether we live in post-gender society, whatever you call it, it is basic human mechanisms. That is how we will hopefully be able to understand each other.

D.S.: Will you share a summary of your upcoming projects with us?

A.B.: My crew is begging to make something fun. After "Snow," which is a drama about war, I decided to make a teenage movie with the "Children of Sarajevo." I really wanted to make a fun film. However, when I delved into the problems of teenagers, it appeared to be horror. After this film, I thought I could make a love story. I want to make a project based on an oral poem written in Bosnia during the Ottoman times. It is a beautiful poem about male-female relationships. This ballad has always been told from the male perspective. However, I want to tell it from the female perspective now, to explore love and romance in post-war Bosnia. We do not talk about love anymore. I will try to explore where the romance that was written in oral tradition has gone.