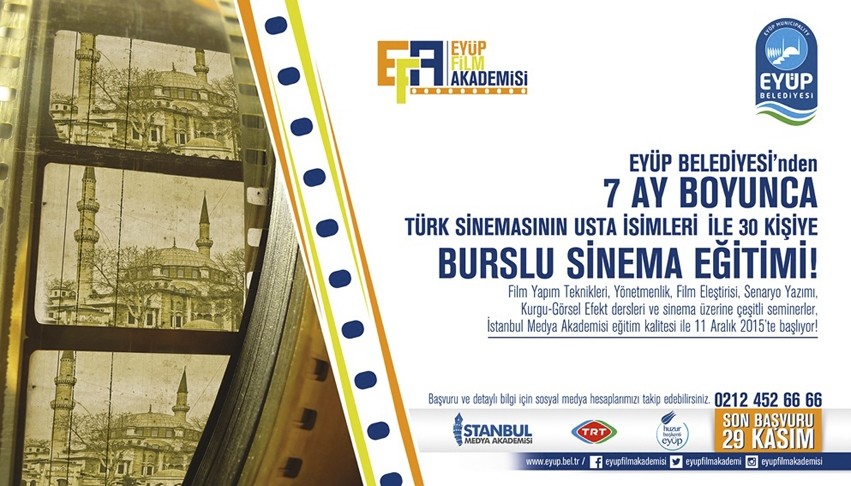 Eyu00fcp Film Academy will teach students how to use a camera, lighting and visual effects, scriptwriting and its criticism and montage techniques for seven months.
by Anadolu Agency
Nov 07, 2017 12:00 am

Students will learn how to use the camera, lighting and visual effects, scriptwriting and its criticism and montage techniques for seven months in the third season of Eyüp Film Academy, an initiative of the Eyüp Municipality, held in collaboration with Istanbul Media Academy and with sponsorship from TRT media.

At the inauguration ceremony of the new season, which was organized at the Eyüp Cultural Center, a short introductory film on the project as well as short films shot by the students were screened.

Explaining that students are excited because they will participate in the international film festival, Şanlıer said: "Our young students might get awards at the International Bosporus Film Festival. We have many important international guests this year and we will host world-famous directors. They will have the chance to meet these directors. We are really happy to provide this opportunity for them."

Search for requirements of our age

Director Derviş Zaim said Eyüp Sultan has a cultural and historical locus. "It is one of the places that houses the highest number of works of Mimar Sinan. Therefore, we can have many things on our minds when a film is made, and we can express our aim in various ways. If we live in this land and want to develop or say something about it, we have to be careful what our region has prepared for us," the director said.

Asserting that what Mimar Sinan can tell today's filmmakers is important, Zaim said: "I think this is one of the issues that should be discussed. Mimar Sinan never did the same work twice, he always tried something new. He made different things depending on time, place and context. Therefore, his attempt is a simple example of what he can bestow us. I think, Eyüp Sultan includes all the hints that a filmmaker can find when theylook around. We have to look around in order to find today's requirements, forms and content and also be researchers. How Mimar Sinan didn't do same thing twice and continued with valuable research should be an example for us. We should appropriate a similar perspective in order to develop this art."

Director Hüsamettin Ünlüoğlu, actor Ferdi Altuner and Eyüp Film Academy instructor Ege Ellidokuzoğlu gave information about the academy to students at the event, as well. After the speeches, Eyüp Mayor Remzi Aydın gave certificates to the 21 graduates from the Eyüp Film Academy's 2016-17 term.