The film provides a portrait of the Bedouins during World War I and offers an interesting depiction of a weary Ottoman official in the Hejaz as something other than a cartoon villain we are used to seeing on the big screen.
by Nagihan Haliloğlu Dec 16, 2017 12:00 am

British-Jordanian filmmaker Naji Abu Nowar's 2014 film is set in the Hejaz in 1916, following the story of a boy named Theeb who goes on a journey into the desert with his brother, an Englishman and his Arab companion. The viewer gradually gets to know the intentions of this Englishman in officer's clothes, and the journey soon takes on a sinister turn

Naji Abu Nowar's film "Theeb" (Wolf) opens with lines of Arabic poetry that sound very much of the Jahiliyya kind: "Never refuse a guest. Be the right hand of the right men when men make their stand. And if the wolves offer friendship, do not count on success; they will not stand beside you when you are facing death." These wise words from centuries ago make us anticipate an epic story, and director Nowar delivers on his promise. I have heard this film described as a western set in the Hejaz several times, but it is much more than that. It provides a portrait of the Bedouins during World War I and offers an interesting depiction of a weary Ottoman official in the Hejaz as something other than the cartoon villain we are used to seeing on the big screen.

The genius of Nowar's storytelling is that he takes characters we know from other films set in World War I in the Arabian dessert - and there are not that many, so the mind very often draws parallels with "Lawrence of Arabia" - and does something very different with them. It is only natural that a film set in the desert should open with poetry. I watched the film at an open air screening in Doha, the Ajyal Film Festival, and under the sky - although stars were not visible in my urban setting - I became one of the people sitting around the fire and trying to listen with equal care when Hassan, Theeb's elder brother, tries to make out what it is that is approaching the Bedouin camp. From the darkness, in due time, another Arab appears and then a man dressed in European officer's clothes. Nowar beautifully delays our and Theeb's first glimpse of the English officer; when we do, the English officer takes of his cap revealing his yellow hair, and our peace is broken. The yellow head is as uncanny or foreboding as the bird in the cage that Tippi Hedren's character introduces to the town in Hitchcock's "The Birds," that then upsets and transforms the behavior of birds of the local variety. 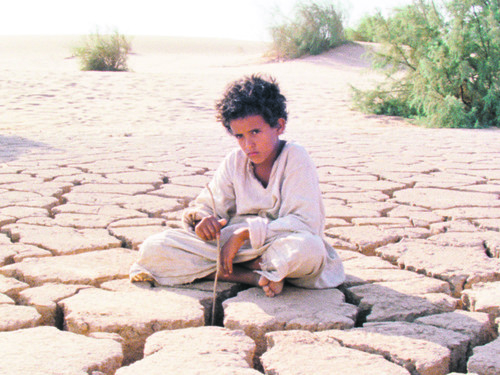 Nowar tells the story through Theeb's eyes, and we watch him watch the Englishman. The Bedouin duly slaughter an animal for him as is their tradition and there is a feast. As the English officer tries to tear himself away from the tray where the food is laid out he says, "I'm stuffed, no honestly." He sounds very much like a gap year student enjoying the hospitality of his Arab hosts. Although his wording sounds anachronistic, it also points to a genealogy of young English men sent to the East to "find their feet in the world," mostly at the expense of the welfare of the places they are sent to.

Looking for someone to guide them to some Roman wells is the reason the Englishman and his Arab speaking companion have come to the Bedouins, knowing full well that a Bedouin will never refuse a request to guide a stranger in the desert. Intrigued and not altogether convinced of the good intentions of the Englishman, Theeb, both with his wolf's sense of danger and thirst for adventure, wants to join his older brother to take this Englishman to his Roman wells. Theeb watches the Englishman do his morning routine and goes through his things as he is shaving. When Theeb touches a big wooden box, Edward, for that is the Englishman's name, becomes alarmed, flies at him with real anger, and we see his behavior transform towards Theeb, whom he has treated more or less like a pet during the feast. Viewers who have watched World War I films might recognize what this box is, and no doubt remains as to what it is when we overhear Edward and his companion talk about railroad tracks in whispers. Theeb himself is further alarmed when he asks Edward to sing when they camp en route to the Roman well, as he has managed to join the expedition after all, and Edward flatly refuses. What kind of a man would refuse their camp companion's request to sing?

One of the crucial scenes happens as they cross rock formations that look very much like Petra - again, scenery we recognize from other films set in the area. In previous, similar tales for the screen, Arab characters have always been dispensable, necessary background for the white protagonist in such scenery, but in this film Arabs prove recalcitrant. Theeb plays with the box, and Edward flies at him again. But this time Hussein is close by and prevents Edward from touching the boy. He threatens Edward with such real anger that it is impossible not to appreciate Hussein Salameh el-Sweilhiyeen's acting. He is the image of the Arab brother who will not allow a stranger's hand to touch his little brother, and in the epic narrative of the film, it is that moment when Theeb's body comes to stand in for Arabia as a whole. Not long after, we hear Edward speak to his companion callously about how he doesn't care whether the two boys make it out alive or not.

However, it is the Englishman who the story leaves behind - under what circumstances I'd be happy to describe but that would be too great a spoiler - when their party gets into a skirmish with bandits. The clash with the bandits is the part that has made people compare "Theeb" to a western, and yet, the bandits are also three-dimensional characters, rather than just chess pieces that help move the story forward. The one bandit we get to know, 'the Stranger', has his own vendetta against the railway. He tells Theeb that he used to be a pilgrim guide who has been put out of a business because now pilgrims take the train. He, unlike Edward, is willing to sing, and tells the boy about the places he has visited, the several seas he has seen, including one he calls "the sea of Palestine," which seems to be his, or Bedouin, word for the Mediterranean.

The last confrontation happens at a forlorn Ottoman desert station where Theeb observes the Ottoman officer, whose face seems very familiar from one of those Turkish series that are very popular with the Arabs, shave, mirroring the earlier scene when Edward was shaving. We see Theeb make a connection between the two embodiments of authority, but this one speaks proper Arabic and looks Theeb in the eye. We go back to the tale at the beginning of the film and try to figure out who are the right men and who is the wolf. The film ends with Theeb rejecting Ottoman help and deciding to find his way to his people on his own. The audience knows that he has grown up through the adventures he's experienced, but remains unsure about the perils on the way back. If that is not a metaphor for Middle Eastern politics and history, I do not know what is.