'Shape of Water' triumphs at an Oscars full of change 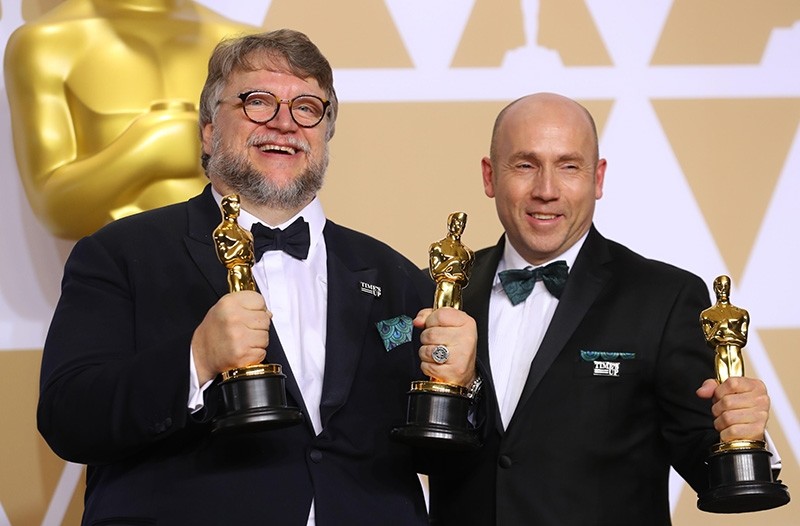 Guillermo del Toro and J. Miles Dale after winning Best Picture and Best Director awards for ,The Shape of Water., (Reuters Photo)
by Compiled from Wire Services Mar 05, 2018 12:00 am

Against all odds, love won out at the 90th Academy Awards.

Guillermo del Toro's lavish, romantic monster fable "The Shape of Water" swam away with best picture at an Oscar ceremony flooded by a sense of a change for a movie business confronting the post-Harvey Weinstein era.

The ceremony, held Sunday at the Dolby Theatre in Los Angeles, exorcised some demons — like last year's envelope fiasco — and wrestled with other, deeper problems in Hollywood, like gender equality and diversity.

"The Shape of Water," which came in with 13 nods, took a leading four awards, including best production design, best score and best director for del Toro. He became the third Mexican-born filmmaker to win the award, joining his friends and countrymen Alejandro Inarritu and Alfonso Cuaron — who once were dubbed "the Three Amigos."

"The greatest thing that art does, and that our industry does, is erase the lines in the sand," said del Toro.

Jordan Peele won for his script to his horror sensation "Get Out," becoming the first African-American to win for best original screenplay. Peele said he stopped writing it "20 times," skeptical that it would ever get made.

In a year lacking a clear front-runner the awards were spread around. Christopher Nolan's World War II epic "Dunkirk" landed three awards, all for its technical craft: editing, sound editing and sound design.

Things went expected in the acting categories, where Frances McDormand won her second Oscar for her performance in "Three Billboards Outside Ebbing, Missouri." McDormand asked all the attending female nominees stand up in the theater.

But many of the show's most powerful moments came in between the awards. Ashley Judd, Anabella Sciorra and Salma Hayek — who all made allegations of sexual misconduct against Weinstein — together assembled for a mid-show segment dedicated to the #MeToo movement that has followed the downfall of Weinstein, long an Oscar heavyweight. They were met by a standing ovation.

"We work together to make sure the next 90 years empower these limitless possibilities of equality, diversity, inclusion and intersectionality," said Judd. "That's what this year has promised us."

Host Jimmy Kimmel opened with a monologue that mixed Weinstein punchlines with earnest comments about reforming gender equality in Hollywood. And of course, Kimmel — returning to the scene of the flub — dove straight into material about last year's infamous best-picture mix-up.

"I do want to mention, this year, when you hear your name called, don't get up right away," said Kimmel. "Give us a minute."

But while Kimmel spent a few moments on the fiasco known as Envelopegate, he expended far more minutes frankly and soberly discussing the parade of sexual harassment allegations in the wake of the revelations regarding Weinstein. Kimmel cited the industry's poor record for female directors and equal pay.

Gesturing to a giant statue on the stage, he praised Oscar, himself for keeping "his hands where you can see them" and for having "no penis at all." But Kimmel introduced the broadcast as "a night for positivity," and cited, among other things, the box-office success of "Black Panther" and "Wonder Woman."

"I remember a time when the major studios didn't believe a woman or a minority could open a superhero movie — and the reason I remember that time is because it was March of last year," said Kimmel.

Several cinema legends won their first Oscar. James Ivory, 89, won best adapted screenplay for his script to the coming-of-age drama "Call Me By Your Name," becoming the oldest winner ever. After 14 nominations, revered cinematographer Roger Deakins finally won for his photography on "Blade Runner 2049." In the category, Rachel Morrison ("Mudbound") became the first woman nominated for best cinematography.

Pakistan-born comedian Kumail Nanjiani joined Kenyan-born Lupita Nyong'o to salute the so-called Dreamers — immigrants brought to the U.S. illegally as children and here without permanent protection from deportation. "Dreams are the foundation of Hollywood and dreams are the foundation of America. And, so, to all the Dreamers out there, we stand with you," Nanjiani said.

"The biggest thank you of all to the people of Mexico," said director Lee Unkrich to loud applause. "Marginalized people deserve to feel like they belong. Representation matters."

Netflix scored its first feature-film Oscar, with best documentary going to "Icarus," Bryan Fogel's investigation into doping in sports, aided by the assistance of Grigory Rodchenkov, the head of the Russian anti-doping laboratory who candidly discussed the doping scheme under Vladimir Putin. Fogel dedicated the award to Rodchenkov, "our fearless whistleblower who now lives in grave danger."

The ceremony was the crescendo of one of Hollywood's most turbulent awards seasons ever — one that saw cascading allegations of sexual harassment topple movie moguls, upended Oscar campaigns and new movements launched to improve gender equality throughout the industry.

No Golden Globes-style fashion protest was held by organizers of Time's Up, the initiative begun by several hundred prominent women in entertainment to combat sexual harassment. Their goals go beyond red carpets, organizers said in the lead-up to the Oscars. "We did the dress code thing and now we're doing the work," said #MeToo founder Tarana Burke on the red carpet.

Twenty years ago, a "Titanic" sweep won record ratings for the Oscar broadcast. But ratings have recently been declining. Last year's show drew 32.9 million viewers for ABC, a 4 percent drop from the prior year. Even more worrisome was a slide in the key demographic of adults aged 18-49, whose viewership was down 14 percent from 2016.

Movie attendance also hit a 24-year low in 2017. But this year is already off to a strong start, thanks largely to Ryan Coogler's "Black Panther," which many analysts believe will play a prominent role at next year's Oscars. In three weeks, it has already grossed about $500 million domestically. The film's star, Chadwick Boseman, was placed front-and-center, at the Dolby Theatre.

This year, the academy prohibited the PwC accountants who handle the envelopes from using cellphones or social media during the show.

With just a few minutes before the show started, Kimmel and his team emerged from his dressing room chanting, "Let's get it right this time!"

Best Picture: The Shape of Water