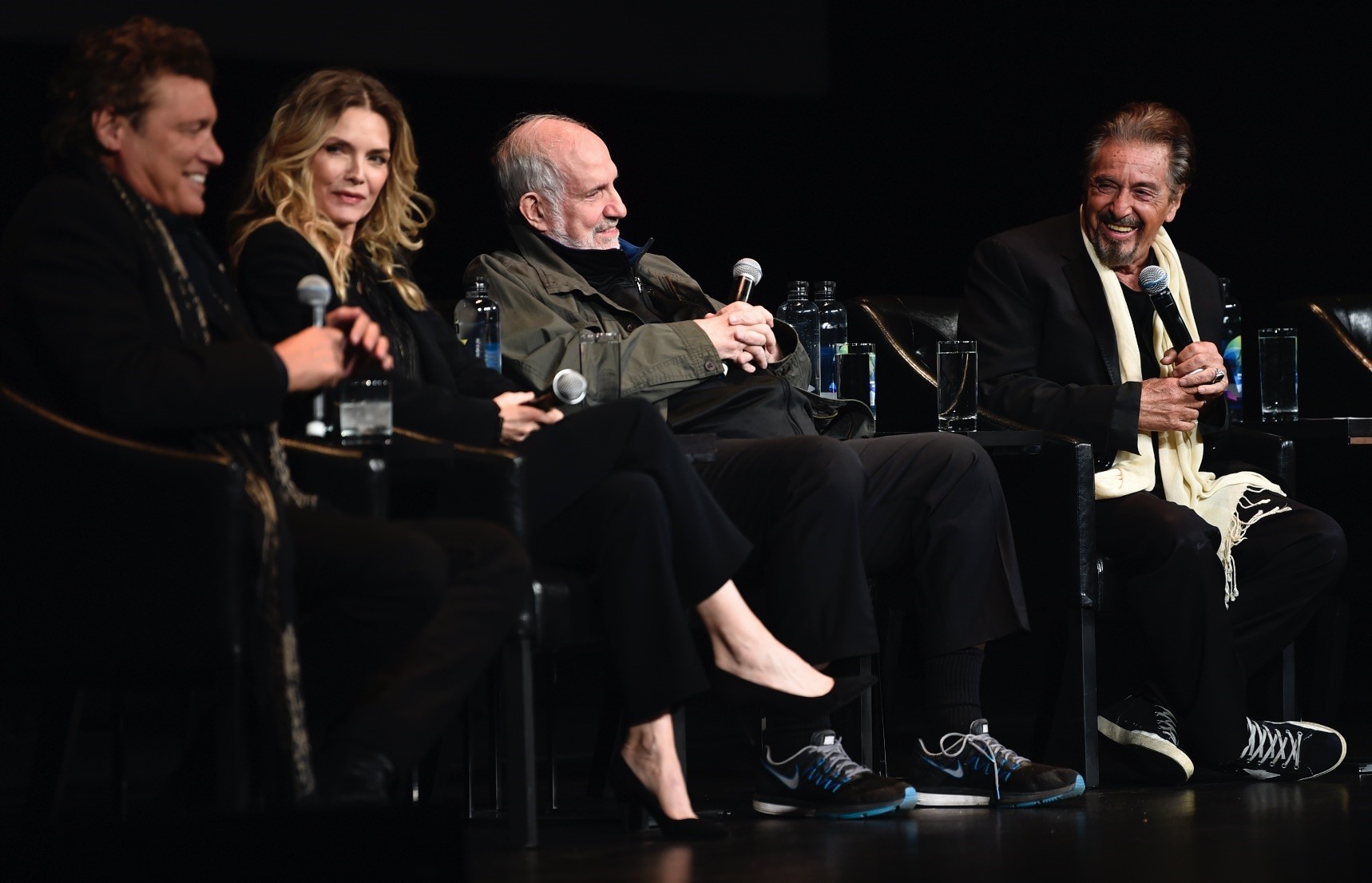 Old "Scarface" friends said hello again at a 35th anniversary screening Thursday that reunited stars Al Pacino, Michelle Pfeiffer and Steven Bauer and filmmaker Brian De Palma for an evening full of reflection on how the ferocious and garish gangster epic-like Tony Montana's rise from dishwasher to drug lord - has grown in stature.

The reunion, held at New York's Beacon Theatre, was one of the main events of the just kicked-off Tribeca Film Festival. The festival has made such anniversaries a regular feature in recent years, many of them celebrating classics of Tribeca co-founder Robert De Niro. But the "Scarface" event was for a movie De Niro reportedly turned down, and which now lives on as one of Pacino's maximum performances.

De Palma, the celebrated 77-year-old filmmaker of "Carlito's Way" and "The Untouchables," suggested the arc of Montana in "Scarface" was reminiscent of President Donald Trump's.

"I've always been interested about making movies about people who start rather humbly and then acquire a great deal of power and then ultimately isolate them- selves and live in their own world. Could that be anything we're experiencing now?" said De Palma with a laugh.

The reunion wasn't without its hitches. When the post-screening panel moderator Jesse Kornbluth - as seemingly an opening to discuss Pfeiffer's character's gaunt, cocaine-snorting habits - asked the actress how much she weighed when making the film, boos echoed around the theater. But the affection the crowd had for "Scarface" was palpable throughout the evening, with applause bursting out frequently during the nearly three-hour film for favorite scenes and cherished lines.

De Palma's 1983 film, penned by Oliver Stone, was a remake of the Howard Hawks - directed 1932 gangster film of the same name. (De Palma even dedicated the film to Hawks and screenwriter Ben Hecht.) The project began with Pacino being enthralled by the original.

"I was completely taken with Paul Muni's performance," said Pacino. "After I saw that, I thought: I want to be Paul Muni. I want to act like that."

The idea to update the immigrant story to Cuban refugees in Miami came from filmmaker Sidney Lumet, who was briefly attached to direct. The Mariel boatlift in 1980 brought some 125,000 refugees to Florida from Fidel Castro's Cuba.

De Palma's film was a box office hit, the 16th highest grossing film of the year. But it received mixed reviews. Though some, including Roger Ebert, raved about it, critics like David Ansen of Newsweek called it "grand, shallow, decadent entertainment." Yet for many, its reputation has grown over the years, especially on dorm-room walls and in hip-hop, where "Scarface" became a revered influence.

"It's caught on in such a way, and we have experienced it," said Pacino. "This wasn't the way it started. When 'Scarface' first came out, it was extremely controversial."

The hyper-violent film initially received an "X" rating from the Motion Picture Association of America's ratings board. De Palma said he went through three edits on the film without receiving an "R" rating before he and producer Martin Bregman decided to withdraw any changes.

"Marty said, 'We'll go to war with these people,'" said De Palma, still relishing the battle. "And that's what we did."

Some also took issue with how the film depicted Cuban immigrants as vicious drug-dealers at a time when many were trying to get a foothold in the United States.

"A lot of the old-school Cubans were concerned with me almost to the point that they weren't really sure that my participation in a Hollywood movie was worth me downgrading or degrading or tainting the image of their accomplishments in the new society," said the Cuban-born Bauer. "What I tried to convey to them was: Relax, man. It's a movie." Pfieffer, too, said she's been asked over the years about playing a female character with so little agency in "Scarface."

"I felt that by allowing people to observe who this character is and the sacrifices that she's made said more (than) getting up on any soap box and preaching to people," said Pfeiffer.

The actress added that her experience acting alongside Pacino was life-changing. "One of the things that hit me the strongest was watching him fiercely protect character, really at all costs and without any sort of apology," said Pfeiffer. "I have always tried to emulate that. I try to be polite about it. I think that's what really makes great acting." Pacino also shared one of his most vivid memories. While filming the final shoot-out, he burned his hand badly enough to shut shooting down for two weeks. "I grabbed the barrel of the gun I just fired. My hand stuck to it. It just stuck to it," said Pacino. Pacino promptly left the set to be bandaged at a hospital.

"This nurse comes up to me later and she says, 'You're Al Pacino.' I said 'Yeah.' And she said, 'I thought you were some scumbag,'" Pacino recalled chuckling. "There's something there."